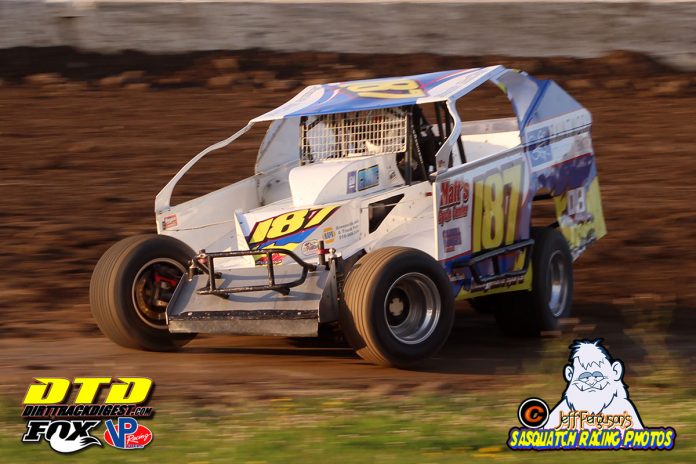 Ryan Heath and Scott McCoy brought the Red Chair 602 Crate Modified to the green flag for their 30-lap affair. Heath jumped out the early lead and set sail into the sunset. Last race winner Andrew Buff was making his trek to the front from his 11th starting position getting by Rocky Warner and a slew of others. Heath was setting a torrid pace when lapped traffic came into play allowing McCoy to close in on the front running rookie. Heath was making veteran moves in traffic, but the #6r Troyer was getting loose, once again allowing McCoy his chance to make a serious threat for the lead. The two battled side by side, but on lap 26, Heath would go into turn 1 and get loose and spin bringing out the caution and also an end to his masterful drive. McCoy would inherit the lead and hold off the advances of Buff and Warner to pick up his 1st career Red Chair 602 Crate Modified win.

In another night of firsts, two-time Jr. Slingshot Track Champion, and All-Star Slingshot feature winner, ‘The G Man” Garrett Poland outdueled Harold Robitaille to pick up his first career Limited Sportsman feature win. Poland worked lapped traffic as if he had been running open wheeled cars for decades, yet this was only career start #4. Robitaille, Travis Whitbeck, David Boisclair, and Jerry Cohn completed the top 5.

Andy Graves loved his 1st career Yurkewecz Auto Crusher Pro-Stock victory two weeks ago that he felt the need to re-visit victory lane for the 2nd straight week. Buck Gasner and Steve Cosselman would be the front row for the 20-lap feature go with Cosselman taking the point at the drop of the green flag. Gasner, with friend and now Glen Ridge Hall of Famer Custom Bob in attendance, would hang tough for a podium position. Graves would overtake Cosselman on a lap 5 restart and never look back. Luke Horning, who had an early race spin, would recover for 2nd, Gasner with an impressive 3rd place finish, Cosselman, and Jim Normoyle rounded out the top 5.

Josh Kane once again outdueled John Napoli and Tim Billington got back to his winning ways in the DOHC and SOHC Mini Stock feature.


Cliff Haslun, who hot lapped fellow competitor Damon Anderson’s #5, would climb back aboard his now infamous ‘Jezzi’ and hold off a feisty Anderson, Kenny Allen and new Hall of Famer Rob VanAernam in the street stock division’s 15 lap feature event.

In the Northeast Paving & Sealcoating Jr. Slingshot division, Miss Sloan Cherko drove a masterpiece of a feature event and dominated the 12-lap event to pick up her 1st career win at the ‘Fastest ¼ Mile on Dirt’ over Brock Pinkerous, Lucas Duncan, Connor Hill, and Corky Warner.

Three first time winners this weekend, who can put their names in the record books next week!?

Next week at The Ridge, the Mohawk Valley Vintage Dirt Modified Series returns to where it all began, with the ‘Thrill on the Hill’ spectacular. The Red Chair 602 Crate Sportsman, Limited Sportsman, Yurkewecz Auto Crusher Pro-Stocks, Street Stocks, Mini Stocks, All-Star Slingshots and the NPS Jr. Slingshots are all on the racing card. Pits open at 3pm, hotlaps at 530pm and heat racing kicks off at 6pm. September 8th, Vengeance gets another shot at redemption, 50-laps, sail paneled modifieds running for $2500, and a guaranteed starting spot in the September 28th Fonda 200!