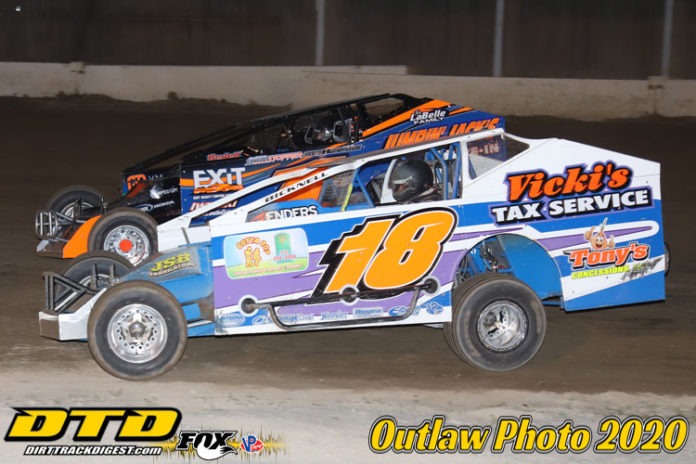 For what had seemed like an eternity, the Glen Ridge Motorsports Park opened their doors for the first time this racing season. An offseason of changes, a back to basics approach, the Ridge was back to life on Sunday night. Over 70 cars filled the pit area all looking to be the first winners of 2020. A returning veteran, young guns and more took home some hardware as the season is now off and running.

Years ago The Rock returned to wrestling and hollered these words, ‘FINALLY, The Rock has returned… HOME’ This past Sunday night, one of the most decorated superstars of the sportsman division, Tony ‘The Flyin Onion’ Farone echoed those same words. Farone and hot shoe Travis Green mashed their loud pedals towards head starter Joe Kriss’ green flag with Farone taking the early advantage. The caution flag would fly early for Jim Nagle, in the Tom & Sharon Spencer owned throwback #17, rear damage would end the night for Nagle and the team. When the field went back to green, Farone maintained his advantage over Green, but Green was not letting Farone get away. While Green hounded Farone, another big gun, Jack Speshock was making his way to the party from his 11th place starting position. After a few caution flags slowing the field, Speshock was now on the door of Farone. The veteran would once again hold off all challenges and picked up The Red Chair 602 DIRTcar Sportsman career win #6 at The Ridge. Green battled back to regain the runner up spot, Speshock, Derrick McGrew and Scott McCoy rounded out the top 5.

There is no driver hotter in full fender racing right now than the ‘Manimal’ Nick Stone. Stone picked up the DIRTcar win Friday night at the Albany-Saratoga Speedway, a win Saturday and looking to start his 2020 campaign a win Sunday at the Ridge. By virtue of their heat race wins, Stone and ‘The Knight Rider’ Justin Knight led the field to green. The dominant Stone could not shake Knight who is no stranger to victory lane at Glen Ridge. The duo ran side by side for the first 5 circuits before Knight went too high in turn 3 and flew off the track ending his night (no pun intended). Shaking Knight would not be all that great for Stone as he had the defending track champ, the Cuz, Luke Horning on his side for the restart. Stone held off all challenges from Horning to capture the Yurkewecz Auto Crushers DIRTcar Pro-Stock Ridge career win #25! The win pulls him within one win on the all-time Pro Stock win list @ Glen Ridge. Horning was 2nd, Coonradt from deep to 3rd, Beau Ballard was 4th, and after a late race jingle, Andy Graves would complete the top 5. Front runner Ivan Joslin flipped his #49 in his heat race ending his night early. Joslin was thankfully uninjured, and the car did not appear too bad and should be back this week he said.

Troy Zilles brought his Limited Sportsman A-Game to the Ridge on Sunday night capturing his 1st career Ridge victory. Taylor Wason had a great race showing he has the grit to find himself a checkered flag this season. Zilles would not be denied victory as it showed on the Race-Moniter APP that he was getting quicker as the laps clicked. So, it was Zilles with the win, Wason 2nd, the Sensational Garrett Poland 3rd, Isaac Walker 4th, Peter Lorenzo III crossing in 5th, 2019 Mini Stock champ Tim Billington was 6th and O’Connor Racing stablemate Stephen Gray was 7th,

At the end of 2019 Damon Anderson was standing tall in victory lane, and at the start of 2020 it was like he never left that spot as he picked up his 6th career Glen Ridge checkered flag. Anderson battled with Kenny ‘The Mail Man’ Allen and Adam Tranka until a late race caution found Allen in the wall. Anderson was up to the challenge as Tranka hounded Anderson #5 and threw everything he had at him but came up short in a ridiculously hard-fought battle and respectable 2nd place finish. John Bradt was 3rd and Allen 4th.

Justin Bellinger collected career win #1 in the Mini Stock battle between him and newcomer Ray Young. Young was giving him everything waiting for a mistake to pounce, but Bellinger was smooth at the top spot to get #1 out of the way. Thank you to Justin and Ray for their support.

When it comes to opening night in the Northeast Paving & Sealcoating All-Star Slingshot division, ‘Mr. Slingshot’ Brett Putnam always comes out of the box swinging. Looking to put win #8 in the record books, Putnam rocketed to the front of the field and never looked back. All-Star rookie Conner Hill ran a masterful race holding off some of the absolute best slingshots the Northeast has to offer including Tyler Vadney, Dan Ballard and his father, and 3-time defending champion, Mike Hill. While the battle was raging for the runner up spot, Putnam was crossing the line in dominant fashion. Mike Hill, Ballard, Jim Pollard and Vadney rounded out the top 5. Putnam, Conner Hill, and Jim Mudge picked up heat race victories. A total of 19 All-Stars were in attendance.

Next up at Glen Ridge is VP Small Engines Fuel night on June 21st. All divisions are on the racing card. The Red Chair 602 DIRTcar Sportsman, Yurkewecz Auto Crushers DIRTcar Pro-Stocks, Limited Sportsman, Street Stocks, Mini Stocks, Northeast Paving & Sealcoating All-Star & Junior Slingshots. Pits open at 3pm, hot laps at 5:30 pm and heat racing beginning at 6 pm. At time of this release, no spectators are allowed, and teams are encouraged to follow CDC guidelines once again. Thank you to everyone who attended and to the Ridge staff for their extra hard work to ensure safety of everyone at the speedway.