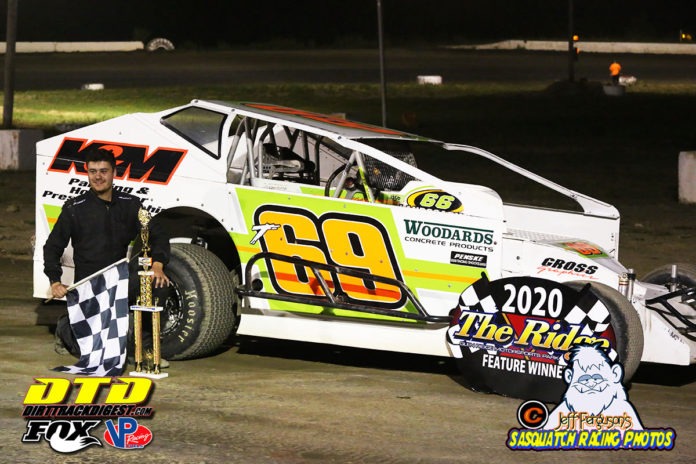 Travis Green and last week’s feature winner Tony Farone brought the Red Chair 602 DIRTcar 602 Sportsman field to green with Green rocketing past the ‘Flyin Onion’ in turn one to take command of the race. Rookie sensation Tucker O’Connor was quickly on his way to the front getting by Farone and setting his sights on Green. The two young hot shoes set a blistering pace getting to lap traffic in a hurry. Bill August snuck by Farone for 3rd a few circuits in. Green was still leading and widened his eyes instead of his lead when a lapped car in front of him hit the inside tired and spun in front of the front running #T69. A few more caution flags slowed the blistering pace, but Green was able to fend off the fierce attempts from O’Connor to claim his 1st career win at the Fastest ¼ Mile on Dirt! O’Connor crossed behind Green in 2nd, August 3rd, Cody Ochs and Justin Buff rounded out the top 5.

Nick Stone continued his dominating ways in the Yurkewecz Auto Crushers DIRTcar Pro-Stock division. Stone took advantage of his front row starting position gaining the lead at the start of the battle. Andy Graves and 2019 Champion Luke Horning started a duel to see who could get the runner up spot to chase down Stone. Horning got the spot, but Graves wouldn’t give up so easily getting back by Horning. A restart saw Stone take off with the ‘Cuz’ back in the 2nd spot. After a few cautions, Stone maintained his spot and took his #27N to victory lane for the 2nd week in a row. Horning would settle for 2nd, Justin Knight battled back to 3rd, Beau Ballard 4th and Andy Graves completed the top 5. The heat has been turned up to the max, as the win for Stone now puts him in a tie with Horning for the most Pro-Stock wins at the Glen Ridge Motorsports Park’s history!

Limited Sportsman feature winner from one week ago, Troy Zilles tore up the track and made teammate Stephen Gray playing catch-up all 20-laps to pick up his 2nd win in a row. All drivers did an amazing job on a super slick racing surface and kept it clean and green. Isaac Walker crossed the line 3rd, Garrett Poland 4th, Peter Lorenzo 5th and last year’s mini stock champion Tim Billington was 6th.

Damon Anderson, after missing his heat race to a part failure, utilized the top groove, bottom groove, Anderson lane and Damon street to slice and dice his way to the victory in the street stock division. The win was the 7th career Glen Ridge street stock win. Adam Tranka, Jesse & Chris Murphy were the finish.

All aboard the Wayne-Lane, it was Wayne Russell Jr returning to the Ridge for the first time this season and picked up his 10th career Glen Ridge checkered flag in the Single Cam Mini Stock Feature, while high flyin Josh Kane won his 14th career Dual Cam Mini Stock feature. The win for Kane moves him into a tie for 5th place on the all-time wins list for Mini-Stocks.

Jim Gaige and All-Star Rookie Connor Hill led the All-Star Slingshots to the green flag, with Hill marching his way to the front of the pack, leading a large pack of hungry rookies and veterans. Hill would lead until the big guns would be on their way. The battle was raging behind the rookie, with Mr. Slingshot Brett Putnam, Dan Ballard, and Mike Hill. After it was all set and done, 3-time and defending champion Mike Hill would rocket to the front from his 9th place starting position to pick up his 1st win of the season over Ballard, last week’s winner Putnam, Tyler Vadney and another rookie proving his place in the All-Stars Darryn Fallis would be your top 5. Conner Hill would finish with a very respectable 6th place finish with some of the best slingshot competitors in the northeast!