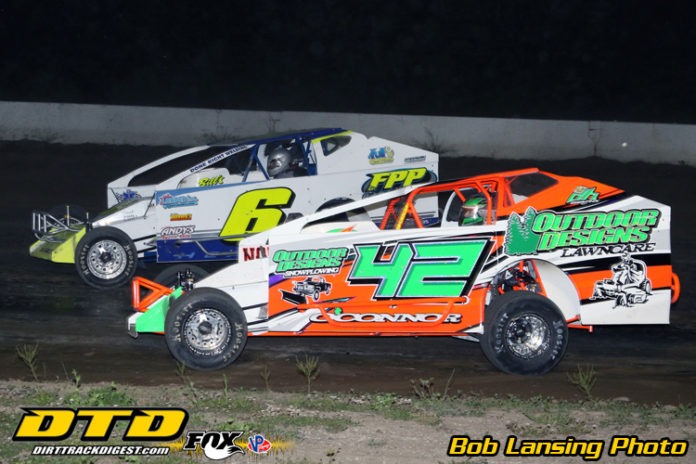 FULTONVILLE, NY –  Mother nature tried to end the race card early Sunday night as it rained early on Sunday as well as after prostock warmups concluded. After the rain delay, racing action began at the fastest 1/4 mile on dirt. We saw a couple first time winners in victory lane on Sunday night as Beau Ballard, Kenny Allen and Garrett Poland all picked up their first career wins in their divisions respectively.

For the Red Chair 602 DIRTcar Crate Sportsman Feature, it was Cody Ochs setting the pace to the flag stand and Ochs began to build a gap between himself and the rest of the field. Tucker O’Conner continued to show his speed as he moved quickly up to second by lap 10. Ochs gap on O’Connor was eliminated by a lap 11 caution with the 16 of Aaron Jacobs coming to a stop in turn two.
On the restart, O’Connor powered around Ochs out of turn two and in the next set of corners an incident with last week’s winner Travis Green & the 6r of Ryan Heath. Green would pull away but Heath’s night unfortunately ended on the hook of the tow truck. O’Connor began to build up a lead on the field off the restart. Andrew Buff was able to take over the runner up spot and set his sights on O’Connor.
A yellow came out that set up a 4 lap dash and gave Buff one more shot to get around O’Connor. It was all for not however, as O’Connor went on to pick up his second win of the 2020 season. Buff would finish in second, Hunter Lap would finish in third, Cody Ochs would finish in fourth and Scott McCoy rounded out
the top five.
The Yurkewecz Auto Crushers DIRTcar Prostocks were ready to go for their 20 lap feature.Beau Ballard and Jay Fitzgerald led the field to the green flag.  Ballard took the lead off the start but Andy Graves and Cousin Luke Horning were on the charge.
Ballard kept the field covered however, as he went onto pickup his first career win at The Ridge. Graves would finish second, Cousin Luke finished Jay Fitzgerald fourth and Tanner Warner rounded out the top five.
In the street stocks, Jimmy Duncan sat on the pole in his 771 for the 15 lap street stock feature. However, by the time the exited turn two, Damon Anderson took over the lead. Around lap three, Kenny Allen powered his number 99 car on the outside lane from last to first and went onto win his first career race at The Ridge. Harley Sheppard finished second and Adam Tranka rounded out the top three.
The Limited Sportsman feature was led to the green flag by Troy Zilles and Taylor Wason. Wason powered around the 14 of Zilles on the outside. Going into turn 3, Zilles went too low into the corner and made contact with an infield tire barrier which ended his night. Off the restart, contact was made out of turn two that ended with Wason facing the wrong way and the lead was now Garrett Poland’s.
Poland assumed the lead off the restart but Stephen Gray was in position to make a move for the top spot should Poland slip up. On lap 11, Gray had the lead for a moment and Poland took the lead back and held onto it as he took the checkered flag. Gray would have to settle for second and Issac Walker rounded out the top three.
In the All Star Slingshots, it was Andrew Millard and Bob Morey leading the field to the green. Brock Pinkerous quickly took over the top spot in the race and had Danny Ballard hot on his tail as the laps clicked off the board. Ballard worked his way around Pinkerous on lap six and began to pull away. A caution at lap 10 brought the field back together as Andrew Millard’s night ended on the hook following an incident in turn four. This set up a five lap dash to the checkered flag.
On the restart, Ballard pulled away and took his first win of the 2020 season. Mike Hill who came from 11th finished in the runner up position, and Conner Hill got 3rd after starting 17th out of 18.
In the Jr Slingshots, Sloan Cherko led the field to the green and held off a late race charge from the 771 of Lucas Duncan to win a green to checkers feature. Corky Warner got 3rd, Brock Pinkerous finished 4th and “Kid Dynamite” Frankie Twing III rounded out the top five.
In the mini stocks, it was Joshua Kane taking the win in the dual cam class while Ray Young won in the single cam class.
POST RESULTS RED CHAIR DIRTcar Racing 602 SPORTSMAN: TUCKER O’CONNER, ANDREW BUFF, HUNTER LAPP, CODY OCHS, SCOTT MCCOY, BILL AUGUST, DERRICK MCGREW JR., TRAVIS GREEN, BRENDAN GIBBONS, ALEX VANPELT, KENNY RYDER, JOE ORLANDO, AARON JACOBS, RYAN HEATH.
YURKEWECZ AUTO CRUSHERS DIRTcar Racing PRO-STOCKS: BEAU BALLARD, ANDY GRAVES, LUKE HORNING, JAY FITZGERALD, TANNER WARNER, JUSTIN KNIGHT, BUCK GASNER, KEN GRIFFIN, MATT GRONCKI.
LIMITED SPORTSMAN: GARRETT POLAND, STEPHAN GRAY, ISAAC WALKER, TAYLOR WASON, TROY ZILLES, AMBER JACOBS.
STREET STOCKS: KENNY ALLEN, HARLEY SHEPARD, ADAM TRANKA, JIM DUNCAN, DAMON ANDERSON.
SINGLE CAM MINI STOCK: RAY YOUNG, ZACH MCSPIRIT, WAYNE RUSSELL JR, MIKE HAMAN, WILLIAM COOK JR, TJ MARLETT, DALE VANALLEN.
DUAL CAM MINI STOCK: JOSH KANE, JUSTIN POPE, JOSH SAMROV, BILLY HILLMAN JR, JOHN NAPOLI, PAT MCSPIRIT, BRANDON TYLER.
Northeast Paving and Sealcoat ALL-STAR SLINGSHOTS: DAN BALLARD, MIKE HILL, CONNER HILL, BROCK PINKEROUS, SCOTT SPRAGUE, DARRYN FALLIS, JIM MUDGE, BOB MOREY, TUCKER JONES, TYLER HOLCOMB, SPENCER CHERKO, ANDREW MILLARD, TYLER VADNEY, NICK AUSPELMYER, DON BOONSTRA, JIM GAGE, JIM POLLARD, NICK MILLARD.
Northeast Paving and Sealcoat JUNIOR SLINGSHOTS: SLOAN CHERKO, LUCAS DUNCAN, CORKY WARNER, BROCK PINKEROUS, FRANK TWING JR, HAYDEN ACKERNECHT, TAVIN BLOWERS.
Competition Carburetion Fast Timers: DIRTcar 602 Sportsman Tucker O’Conner, DIRTcar Pro-Stock Andy Graves. Both received $50 from Competition Carb & $50 each with the Man with the Red Chair! Thank you both so much!