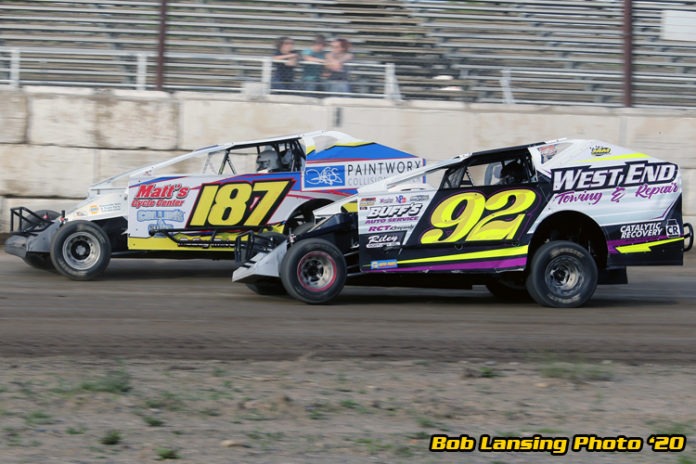 FULTONVILLE, NY – Sunday night got interesting up at the Ridge on Catalytic Recovery night. Andrew Buff finally got the monkey off of his back and picked up his first win of the season while Nick Stone had 1300 reasons to be smiling as he took home the win in the DIRTcar pro stocks.

In the Red Chair 602 DIRTcar Crate Sportsman feature, it was Tucker O’Connor leading the field to the green flag. However, it wasn’t long before O’Connor had pressure from the 92 of Andrew Buff. Buff would take it to the outside lane and made it look easy as he passed O’Connor for the lead on lap four. Buff was starting to put some distance between himself and the field when a caution came out for the 18 of Tony Farone & Dave Richer coming together in turns one and two.

Buff picked up where he left off on the restart and had a fairly comfortable lead until a lap 12 caution came out for last week’s winner Brendan Gibbons who came to a stop over in turn two.

From there on out, it was all Andrew Buff as he took home his first win of the season at the ridge (and second of the weekend as he won the sportsman feature at Albany Saratoga on Friday). Scott McCoy got around Tucker O’Connor in the later stage for the runner up spot while Travis Green & Justin Buff completed the top five.

In the Yurkewecz Auto Crusher DIRTcar Pro stocks had alot to win as $1300 was put up to the winner as Ken Griffin & Beau Ballard sat on the front row of the 20 lap feature. Ballard used the high line to grab the lead. However, he had a couple of hyenas to worry about in the form of “Cousin” Luke Horning and Nick Stone. Stone was able to get to Ballards back bumper and for a while, it appeared that Ballard may have enough speed to hold off Stone but, as they hit lap traffic at the halfway point, Ballard moved down to the bottom of the track which allowed Stone to get around him and go onto pickup his third win of the season. Beau Ballard would finish in the bridesmaid spot while Cousin Luke, Ivan Joslin & Justin Knight completed the top five.

Limited Sportsman action got underway as Tim Billington sat on the pole for the 20 lap feature event. However, the driver to Billingtons outside wouldn’t let him lead much more than past the flagstand as James Venditti took the race lead. The driver on the move was the 40g of Garrett Poland as he looked to have enough speed to contest for the win. However, all of that changed with five to go as Poland slowed on the track bringing out a yellow. This allowed the 25 of Stephen Gray to make a move on Venditti.

Venditti got a good restart but Gray got a great restart and looked to the inside of Venditti but couldn’t complete the pass as James Venditti went on to pick up his first career win in the limited sportsmans. Stephen Gray would come home in second while Peter Lorenzo III, Troy Zilles & Carter Gibbons completed the top five.

The 15 lap street stock feature saw Damon Anderson get back to victory lane in the 5 car after leading wire to wire. Adam Tranka finished in second while Kaleb Sheppard rounded out the podium in his first time at the track.

In the All Star Slingshots, Nick Auspelmyer jumped out to the early lead from his sixth place starting position and appeared to be on his way to his second win of the year. However, with just a few laps remaining, Spencer Cherko & Danny Ballard drew in on Auspelmyer & after a spirited battle, Spencer Cherko was able to nudge out in front to pick up his first win of the 2020 season. Ballard would finish in second, Auspelmyer would end up third, Mike Hill came home fourth and Tavien Blowers completed the top five.

In the Jr Slingshots, Corky Warner was the pole sitter but he had the 5 of Brock Pinkerous applying pressure quickly. Contact was made between the Warner & Pinkerous which bunched the field up and led to the 10 of Sloan Cherko climbing the wall and going up and over, bringing out the red flag.

Pinkerous was sent to the rear for his involvement in the incident, which handed the lead to the 82 of Liam Jackson. On the restart, Jackson got a good restart but closing in on Jackson was the 1 of Frank Twing Jr and with a few laps to go, Twing used the outside lane to pass Jackson & go on to pick up his third win in the last four races. Liam Jackson would have to settle for second while Lucas Duncan, Cole Conrad & Brock Pinkerous completed the top five.

The Mini Stock 15 lap features were won by Josh Kane who is now 6 for 6 in the dual cams & Dale VanAllen picks up another win in the single cams.