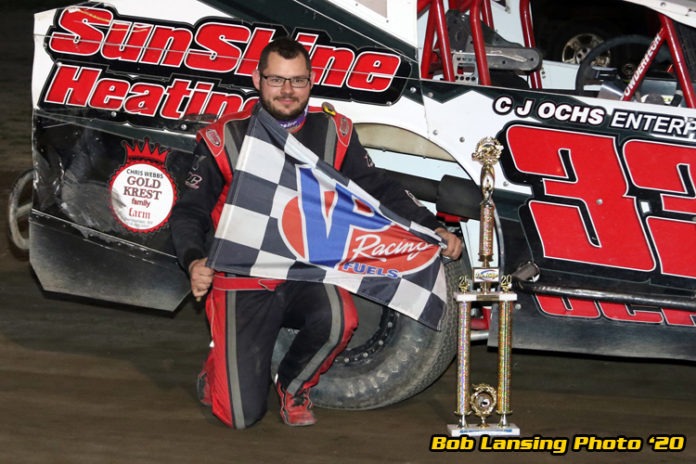 FULTONVILLE, NY – It’s not often that the phrase “Any Given Sunday” is true but in 2020, the headline Red Chair 602 Crate Sportsman have been just that as no driver has won multiple races in the seven previous events. That was also the case after all was said and done Sunday night as Cody Ochs picked up his first career win & became the eighth different winner in the class.

Jason Reome & Tucker O’Connor set the pace for the 30 lap Red Chair 602 DIRTcar Crate Sportsman Feature. It didn’t take long for things to get out of hand as contact over in turn one up towards the front led to a pileup that got a bunch of cars including last weeks winner Andrew Buff, Tony Farone, Tucker O’Connor & Joe Orlando. The lap one incident handed the lead over to the 33 of Cody Ochs for the restart and it wasn’t long before Ochs had company as Travis Green in the 69 was close in tow. A caution came out around the halfway mark for the 187 of Scotty McCoy who was the points leader coming into the night. McCoy hit an infield tire and that destroyed the front end of his car. Ochs once again held off Travis Green on the restart but there was a third car who had entered the battle for the lead in the form of “The Onion” Tony Farone. Farone had rebounded from the early wreck and looked to have the speed to give Ochs & Green a run for their money. However, at the end of the 30 lap event, it was Cody Ochs coming out on top for the first time in his career at the Ridge. Ochs became the eighth different winner in eight events for the 2020 season. Travis Green would hold off Tony Farone and they’d finish second & third respectively. Bill August & Andrew Buff completed the top five.

Tanner Warner set the pace for the Yurkewecz Auto Crushers DIRTcar Prostock feature. However, Warner would quickly have a dancing partner up front as Andy Graves car was set on kill. Graves would grab the top spot away from Warner on the second lap of the race and began to open up a 3/4 straightaway lead. Just when it looked like no one was going to catch Graves, a caution came out for the 34 of Matthew Gronki going around in turn four. Graves would have to hold off “Cousin” Luke Horning on the restart and Graves did just that as he went onto pickup his first win of the 2020 campaign. Horning would finish in the runner up spot while Beau Ballard, Ivan Joslin & Buck Gasner completed the top five.

In All Star Slingshots feature, Tucker Jones led the field to green and immediately had company as the t31 of Darryn Fallis & the 22m of Danny Ballard looked to get the lead. Ballard would come out of the three car battle as the new leader until a lap 5 yellow as the 22c of Connor Hill & Tucker Jones came together going into turn three. From there, it was all Danny Ballard as he went onto pickup up his second straight win & third win of the year (as well as expanding his points lead). Nick Auspelmyer came home as the runner up, Darryn Fallis finished in third while Mike Hill & Tavien Blowers completed the top five.

Ryan McCoy sat on the pole for the Jr. Slingshots feature but Sloan Cherko quickly assumed the top spot and appeared to have the field covered until a caution came out for the 68 of Hayden Ackerknecht going around in turn two. Cherko had the top two in points right with her off the restart as Lucas Duncan & Frank Twing Jr were battling hard for the lead. It was Twing who assumed the lead when all was said and done as he went on to pickup his fourth win in the last five races. Cherko would hold off Duncan for second while Liam Jackson & Corky Warner rounded out the top five.

In the Limited Sportsmans, James Venditti took the lead early and went on to score back to back wins in a green to checkers feature. Carter Gibbons would finish in second while Troy Ziles, Stephen Gray & Issac Walker rounded out the top five.

Adam Tranka scored his third win of the 2020 season in the street stocks, holding off a fast duo of Kenny Allen & Damon Anderson.

In the Mini Stocks, Josh Kane continued to be undefeated in the dual cam class, holding off the great Kenny Hollenback in a dash to the checkered flag where they were door to door for Kanes seventh win of 2020, while Wayne Russell Jr picked up his second win of 2020.