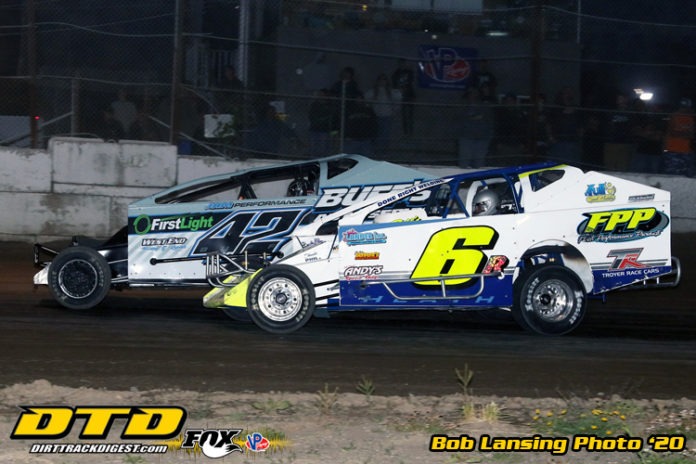 FULTONVILLE, NY – A day that will Ryan Heath will not soon forget as he finally broke through and picked up his first career win in the Red Chair 602 Crate Sportsman after having a black cloud follow throughout the early part of the 2020 season. While in the Prostocks, “Cousin” Luke Horning made it look easy as he extended his points lead & picked up his third win of 2020.

Ryan Heath & Joe Orlando led the field to the green flag in the Red Chair 602 DIRTcar Crate Sportsman 30 lap feature. Heath led early but, off a lap six restart, Tucker O’Connor used the outside lane to overtake Heath for the top spot. Heath however, refused to let this race slip away has he stayed with O’Connor and got the lead back on lap 17. Around lap 20, a third party entered the fray for the top spot as Andrew Buff reeled in the top two and appeared to have something for Heath late. However, it was all for naught as Ryan Heath would be denied no more as he picked up his first career win in the 602 crate sportsmans (He did pick up six wins in the limited sportsman division). Andrew Buff came home in second while Tucker O’Connor, Joe Orlando and Travis green completed the top five.

Tanner Warner sat on the pole for the 20 lap Yurkewecz Auto Crushers DIRTcar Prostock feature. It wouldn’t be long until he had his hands full as Beau Ballard, Ivan Joslin & Luke Horning all were bunched up for the lead. Horning ended up with the lead as he worked his way around Warner as they came to complete lap five. From there, Horning checked out and picked up his third win of the season. Andy Graves initially came home in the runner up position however, he came up light at the scales. This gave Beau Ballard the second place finish while Tanner Warner, Gentleman Jim Normoyle & Buck Gasner rounded out the top five.

Harley Shepard sat on the pole for the street stock race & immediately had company as Adam Tranka & Damon Anderson went three wide with Shepard for the top spot. The battle for the lead would cease as a caution came out for the 91 of Matt Mosher who was leaking oil on the track. Damon Anderson used the restart to his advantage as he grabbed the lead away and drove to his fourth win of the year & tenth win overall in the street stock division at the ridge. Kenny Allen & Adam Tranka rounded out the podium.

Joe Venditti grabbed the lead in the limited sportsmans from Tim Billington going into turns 1&2 on the initial lap. Venditti led until a lap later when a caution came out for an incident in turn two involving Carter Gibbons, Isaac Walker & Troy Ziles. Stephen Gray used the restart to catapult into the lead out of turn two & went onto pickup his third win of 2020. Nick Stone (Yes, the Nick Stone who typically haunts competitors of the full fender Prostocks competitors’ nightmares) came home in second while Garrett Poland, Peter Lorenzo III & James Venditti completed the top five.

In the Mini Stocks, Kenny Hollenbeck ended Josh Kane’s undefeated season as he picked up the win in the dual cams while, Wayne Russell Jr went back to back in the single cams.

Tucker Jones was the early leader in the All-Star Slingshots but “Bam Bam” Brock Pinkerous was a kid on a mission as he grabbed the top spot away from Jones. From there, Pinkerous was uncontested as he went on to pick up his first career win in the All Star Slingshot class. Dan Ballard came home in second while Connor Hill, Nick Auspelmyer & Mike Hill completed the top five.

Cole Conrad led the Jr slingshots field to green for their 12 lap feature. Frank Twing Jr was wasting no time early on as he was up to third in a handful of laps. A lap 10 red flag incident bunched the field back up after Twing & the 771 of Lucas Duncan made contact ending with Duncan going up and over. Duncan was able to join the tail end of the field and in a green white checkered fashion, Conrad held off the field as he went wire to wire for his first career win at the ridge. Liam Jackson came home in the runner up spot, Lucas Duncan rebounded quickly for third while Frank Twing Jr & Corky Warner rounded out the top five.