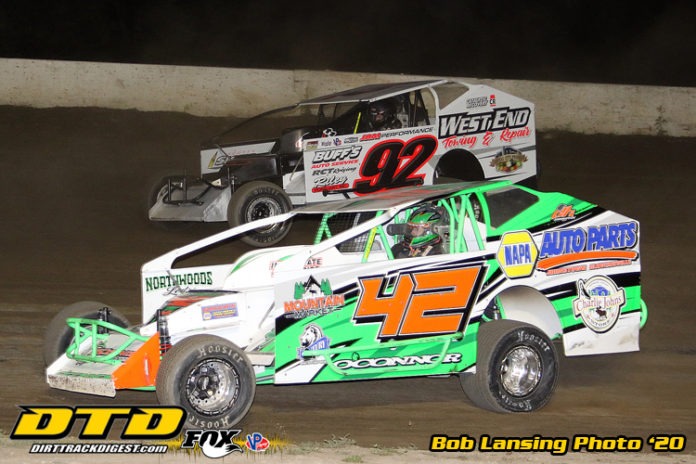 FULTONVILLE, NY – Sunday Night was the Battle of the Buffs in the Red Chair 602 Crate Sportsmans as Andrew passed his brother Justin and went onto pickup win number two on the season while Buck Gasner & Harley Shepard picked up their first career wins in Pro stocks & Street Stocks respectively.

In the Red Chair 602 DIRTcar Crate Sportsman feature, it was Joe Orlando leading the field to the green flag. However, Justin Buff looked to have his car on rails as he took over the lead but numerous cautions would never allow Justin to pull out to a sizable lead.

Justin’s brother Andrew, was using the restarts to weave his way through the pack from his 11th starting spot. After a yellow on lap 11, Andrew was in second. Justin had a good restart but Andrew had a great restart as he powered around his brother for the lead & would go uncontested the rest of the way to pick up win number two on the year (the first driver with multiple wins in the class). Travis Green would come home second, Tony Farone edged out Tucker O’Connor at the line for third & Joe Orlando completed the top five after Justin Buff who originally came home fifth was light at the scales.

In the Yurkewecz Auto Crusher DIRTcar Pro stocks, Don Collins grabbed the early race lead away from Ken Griffin out of turn two. Collins wouldn’t have time to cushion his lead as Charlie Yurkewecz had a violent wreck out of turn four as he hit the outside wall and the car barrel rolled down the frontstretch.Yurkewecz was ok & once the car was towed off the track, racing resumed.

Beau Ballard took the top spot from Collins out of turn two off the restart & looked to possibly have enough of a lead to hold off a fast Luke Horning until a lap eight caution came out for the 34 of Matthew Gronki who spun out in turn two.

Cousin Luke used the restart to get up to the inside of Beau Ballard & was pressuring for the top spot when third place runner Andy Graves made contact with the Horning turning both cars & leaving Ivan Joslin nowhere to go as he was involved. Horning & Joslin would finish the race while Graves pulled the car in for the night.

Ballard would continue to lead the way but he wasn’t able to pull out to a big lead like he had before as Justin Knight & Buck Gasner would remain within a couple car lengths of the 15. Gasner & Knight made contact that led to Knight slowing to bring out the final caution.

Gasner was pressuring Ballard hard off the restart & was able to make the pass with a few laps to go and that was all she wrote as Buck Gasner picked up career win number one in the prostock division at the ridge. Ivan Joslin grabbed the runner up spot away from Beau Ballard while Cousin Luke finished in fourth & Justin Knight rebounded to finish fifth.

Limited Sportsman action got underway as Tim Billington & Joseph Venditti sat on the front row for the 20 lap feature event. However, going into the first set of corners, Venditti looped the car in front of the field. Luckily, no one else got involved.

Billington would have his hands full as Garrett Poland was on his outside & Poland showed why he is the points leader as he worked his way around Billington rapidly to take the lead.

Poland wouldn’t be free & clear however, as the 3g of Peter Lorenzo III was on a mission as he ran the outside lane all the way to the runner up spot. Lorenzo looked like he had the car to beat until he got a little too high & lost a couple spots. This gave Poland all he needed to pickup win number two of 2020 at the ridge. Troy Ziles finished second, Steven Gray came home third, while Peter Lorenzo III & Carter Gibbons rounded out the top five.

The 15 lap street stock feature saw Harley Sheppard finally was able to put it all together & pick up career win number one at the ridge. Damon Anderson nabbed Adam Tranka at the line for the runner up spot while Cliff Booth & Kenny Allen completed the top five.

In the All Star Slingshots, Scott Sprague led the field to green & the field behind him looked like a group of hornets as they were all hot on the tail of the 10 as they were going 3 & 4 wide behind him. In the end, It was Danny Ballard who was able to pass Sprague for the lead and he never gave it up as he extended his points lead & his streak of podium finishes (dating back to July 14, 2019). Nick Auspelmyer finished in the runner up spot while Brett Putnam, Scott Sprague & Darryn Fallis completed the top five.

In the Jr Slingshots, it was all Lucas Duncan as he went wire to wire while holding off Ryan McCoy & Liam Jackson who were hot on his heels. Jackson finished in the runner up position, Ryan McCoy came home third while Frank Twing Jr & Sloan Cherko rounded out the top five.

The Mini Stock 15 lap features were won by Wayne Russell Jr who picked up win #4 of 2020 while Josh Samrov took home the dual cam win after Billy Hillman was disqualified in post race tech.