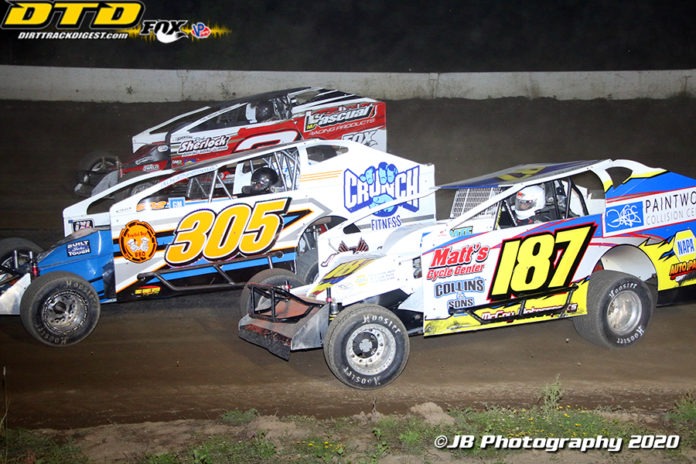 FULTONVILLE, NY – Sunday night was filled with drivers getting their second win of the 2020 season at The Ridge as Scott McCoy, Ivan Joslin, Nick Auspelmyer, & Liam Jackson got their second wins of the season in their respective divisions. Jamie Warner also picked up his first win in several years in the mini stocks while Stephen Gray, Josh Kane & Damon Anderson continued to add to their win totals in 2020.

Joe Orlando & Cody Ochs led the 22 car Red Chair 602 DIRTcar Crate Sportsman feature to green. Ochs nosed out ahead, but it would not be long before the field had to be bunched back up as Bill August hit an infield tire at the bottom of turn four.

Ochs would continue to lead off the restart. However, he would have his hands full as Scott McCoy was pressuring Ochs for the lead while Andrew Buff moved up to third after starting tenth. Just as Ochs pulled a few car lengths out on McCoy, a caution came out as August went around almost in the same spot as he hit the tire earlier in the race.

McCoy took the lead from Ochs and had a comfortable margin. However, Andrew Buff was pouring it on as he reeled in McCoy with about ten to go and just as Buff went for the pass down low, Bill Augusts bad luck in turn four brought out another caution. This set up a three-lap dash for McCoy, Buff & Tucker O’Connor who was catching the top two just before the caution.

McCoy hit his marks perfectly on the final restart & went on to pickup win number two of the 2020 campaign. Buff would settle for second while Tony Farone, Travis Green & Tucker O’Connor rounded out the top five.

Beau Ballard & Ivan Joslin led the Yurkewecz Auto Crushers DIRTcar Prostocks to green for their 20 lap feature. Joslin pulled out to the early lead but a lap two caution would bunch the field back up.

Joslin would lead once again but his father in law, Jim Normoyle would move up to the runner up spot after battling with Luke Horning & Beau Ballard for numerous laps. Just as Normoyle took the spot, another caution came out for Andy Graves who went around in turn four.

Joslin once again took the lead off the restart but Normoyle had his hands full behind him as he was battling with Horning & Nick Stone. Stone would move past both Horning & Normoyle for second just as a caution came out for the 08 who stopped at the exit of turn two.

Adam Tranka sat on the pole for the 15 lap Street Stock feature. However, Kenny Allen used the outside lane to take the early lead away. Tranka refused to let Allen get away & eventually regained the top spot away. A lap 7 yellow came out as Harley Shepard had a right rear tire go down after contact with the 17 of Clifford Booth.

Damon Anderson used the restart to give Tranka all he could handle and took the lead away at the lap 9 mark. Tranka ended up going around after making some contact in turn two which bunched the field up for a green-white-checkered finish.

Anderson catapulted off the restart and picked up win number five for the driver of the five in 2020. Jason Samrov came home second while Chris Stalker, Clifford Booth & Adam Tranka rounded out the top five.

Peter Lorenzo grabbed the lead early in the Limited Sportsman feature & appeared to be running away with the race. However, an infield tire had other in mind as Lorenzo made contact with the tire & spun out. This handed the lead over to Carter Gibbons in the 427

Gibbons led off the restart but he had Troy Ziles & Stephen Gray knocking at the back door. Gray would eventually takeover second from Ziles and completed the pass for the lead in turn four on lap 13. From there, Gray went onto pickup his fourth win of 2020. Gibbons would finish in second while Troy Ziles, Garrett Poland, & Tanner Warner rounded out the top five.

For the Mini Stocks, Jamie Warner picked up the win in Single Cams while Josh Kane held off a late charge from Josh Samrov to take home the victory in the dual cams.

In the All-Star Slingshots, Tucker Jones & Don Boostra led the 24-car field to green. However, it was not long before Mike Hill took the top spot away from Jones as he did so on lap two. Hill was not out front for long either as Nick Auspelmyer rocketed up to the top spot just a lap later.

Auspelmyer soon had heavy pressure as he had the top two in points knocking on his back door in the form of Danny Ballard & Mike Hill. A lap seven caution for the 44 of Brock Pinkerous who came to a stop over in turn four.

Sloan Cherko led the field to green in the 12 lap Junior Slingshot feature. However, it wasn’t long before Brock Pinkerous charged to the front as he took away the lead as the field came out of turn four to complete the first lap. Pinkerous appeared to be on his way to his second win in the Jr division for 2020 until a caution came out on lap seven for Kai DeWitt who looped the car out of turn four.

Aidan Donaldson & Liam Jackson used the restart to make a run at Pinkerous. Donaldson especially as he took the lead coming to the white flag. Pinkerous got a run under Donaldson out of turn two and as they went into turns 3 & 4, Pinkerous & Donaldson came together and were hooked on each other which was enough for Liam Jackson to get around them and pick up win number two of the 2020 season. Matt Backus came home in the runner up spot while Frank Twing Jr, Lucas Duncan & James Hendricks completed the top five.