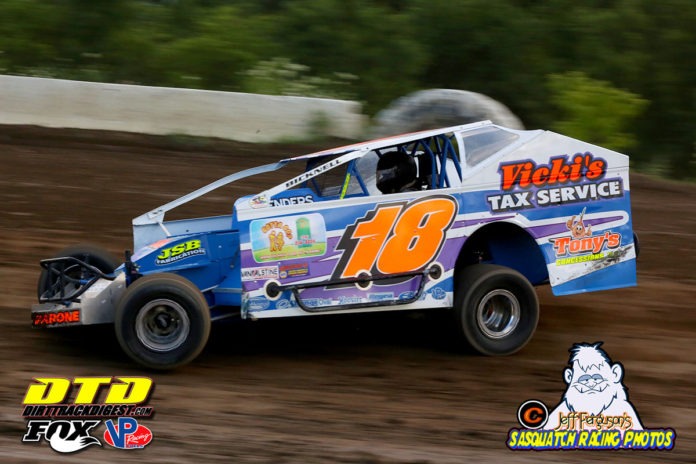 FULTONVILLE, NY – Heading into the Championship Sunday: Part I, Travis Green had a six point gap over Andrew Buff. When all was said & done, they were co-champions in the headline Red Chair 602 Crate Sportsman division. In the Prostocks, Beau Ballard won the race but Cousin Luke Horning won the Championship for the fourth straight season and Stephen Gray picked up the championship in the limited sportsman.

Jason Reome & Ryan Heath set the pace to the green flag for the 30 lap Red Chair 602 DIRTcar Crate Sportsman feature. Reome grabbed the early lead but it would be short lived as Tony Farone was on a mission & by lap 5, he was leading the race.

A yellow came out shortly after. However, Farone was checked out on the field off the ensuing restart and led the final 25 laps to win his second race of 2020. With a 25 lap green flag run, all focus turned to the T69 of Travis Green & 92 of Andrew Buff. It appeared as if Green may win by a slim margin. However, Buff moved around Cody Ochs for second around the halfway mark and went onto finish second behind Farone. However, Green wasn’t able to get into a position to challenge Ochs for third and would up fourth with Mark Mortenson completing the top five.

This led to a TIE for the track championship as Travis Green & Andrew Buff are Co- Champions for 2020 in the Red Chair 602 DIRTcar Crate Sportsman.

Andy Graves & Beau Ballard led the sixteen-car brigade DIRTcar Prostocks feature to green. Ballard would grab the early lead away. However, Ballard would not have time to create a gap between himself and second place as a caution came out on lap four as Andy Graves went around in turn two. This left Ballard with “The Cuz” Luke Horning on his inside.

Ballard would get a nice restart and pulled out to a small lead. However, caution for the 08 of Doug Sheely & the 34 of Matt Gronki bunched the field back up.

Ballard had his hands full off the following restart and Horning was all over the back bumper of the 15. Horning began to have a car on his back bumper as well. This car was the 70x of Josh Coonradt. A caution for Matt Gronki spinning in turn two bunched the field back up.

Off the ensuing restart, Ballard pulled away from the 3 car battle for second in the form of Horning, Coonradt and Nick Stone to pickup win number two. Horning would hold off Stone at the line for second while Coonradt & Buck Gasner completed the top five.

Limited Sportsman action got underway with Taylor LaPlante on the pole for the feature. It wasn’t long however until Carter Gibbons piloted the 427 to the front. Gibbons looked to have the feature in the bag but the 29 of Joseph Venditti casted out a line and reeled in Gibbons with 2 to go and made the pass on the outside as they came to the white flag & went onto pickup win number 2 in 2020. Gibbons would have to come home second, Peter Lorenzo finished in third while Garrett Poland & Stephen Gray completed the top five.

With Stephen Gray starting the feature, he secured his points championship in the Limited Sportsman division for 2020.

In the Mini Stocks, Gina Voris passed Josh Kane & Josh Samrov on the last lap to pick up her first career win at The Ridge in the dual cams while Ray Young picked up the win in single cam action.

Dan Slosek & Bob Morey led the field to green for the 20 car All Star Slingshot field. Slosek had built up a comfortable margin and looked to be on his way to his first win of 2020. However, a caution on lap seven had other intentions.

The caution drew Nick Auspelmyer to Slosek’s outside and Auspelmyer made the most of the restart as he took the lead out of turn two & never looked back as he picked up back to back wins along with his third win of 2020. “Mr. Slingshot” Danny Ballard finished in the runner up spot while Kyle Fallis, Brett Putnam & Dan Slosek rounded out the top five.

Cole Conrad set the pace for six of the twelve laps for Jr. Slingshot feature. As they came to complete lap number seven, Liam Jackson took the top spot away and went onto pickup his third win in a row. Conrad came home second while Lucas Duncan, Evan O’Hara & Frank Twing Jr completed the top five.

The Mohawk Valley Dirt Modified Series made their way into the fastest 1/4 mile on dirt. When all was said & done, it was Randy Delaney (Modified), Stephen Denton (Sportsman), Chuck Scofield (Antiques) & Malcom Warner (Late Models) taking home the wins.