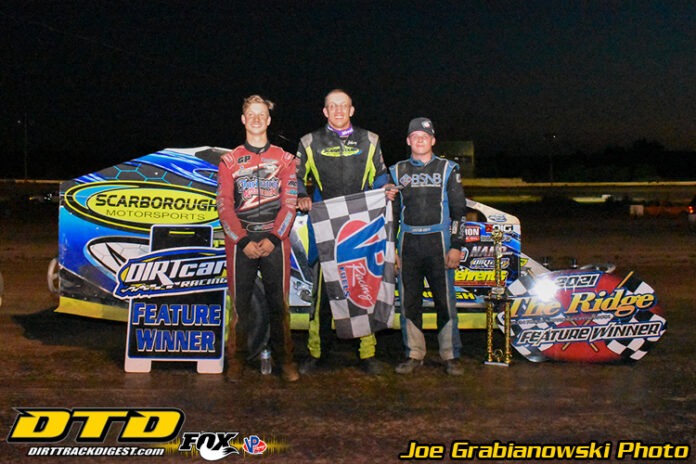 Scarborough jumped out to an early lead after starting on the outside pole. The race went non-stop until lap 33 when Bear Ridge Speedway star and Series Feature winner Jason Gray and several others got tangled up on the front stretch bringing out the yellow flag.

Scarborough fought off challenges from Justin Buff and third-place finisher Garret Poland through the race. While dealing with the threats from behind, the driver of the #61 also had to contend with lapped traffic on a quarter-mile track.

“I’ve learned over the years that you have to be patient with lapped traffic,” said Scarborough. “It seemed that with only one caution flag, I could control the pace of the race. When I got to lapped traffic, I had to follow them and see where they are running which isn’t always easy to do when you are being chased. There’s no time to sleep here. You’re up on the wheel all the time.”

Scarborough has two wins including three top 10 finishes in the first three East Region races. He is now in a dead heat tied for first place in points with David Boisclair.


“I knew on the restart that had to get going,” said Scarborough. “We have a really good race car here. I am looking forward to running the rest of this Series and the Fall Championships this year. I haven’t had a car this good in 10-15 years.”

The racing throughout the field was close on the quarter-mile track but Scarborough was able to skillfully pick off lapped cars as they came. Justin Buff got a good look on the bottom during the final lap as Scarborough got bottled up and opened the door a hair but the #61 managed to widen the rear bumper and held on.

“Ray and his crew here did a fantastic job,” noted Scarborough. “The track was smooth and race-able. To win two of these Series races already this year is great for me. I came back recently from sprint car racing. We struggled with this car but Brandon and Dale Planck helped me out a lot with their Dig Race Products shocks. We’ve been on a streak since switching to them.”

Justin Buff, who finished second at Glen Ridge Feature one week before, had one of the cars to beat once again at “The World’s Fastest Half-Mile.” Although he may have had a faster car than Scarborough at the end, Buff wasn’t able to make the move for the lead stick.

“Overall it was a good run,” said Buff. “We were going for the win. There just wasn’t enough on the top during the restart. We don’t think about the points because we want to win everywhere we go but it’s nice getting another podium finish.”

Buff was locked in battle for most of the race with Garret Poland as they fought over which driver would run down the leader.

“I got into Poland in Turn 3 so I want to apologize for that,” Buff conceded. “He blew by me on the top and showed me that was the preferred lane. It was a great race. We were catching Scarborough at the end but I ran out of laps.”

Garret Poland raced hard against Justin Buff for second for most of the race but it was his stab for the lead that will be remembered.

“In lapped traffic, I got a good run around Buff and then Scarborough got stuck behind a lapped car,” said Poland. “I was about to go by him too but he went up the track and I got into his bumper. That was my only shot there. Scarborough was gone without any lapped cars holding him up.”

Only one caution slowed down the field over 50 laps of action.

“There are some people you know you can race with and the Buffs are great,” Poland noted. “There was contact once going into Turn 3 but that’s racing. He said he sent it in a little hard and I was fortunate enough to save it. This was my best finish here.”

The East Region gets a break until September when they finish up at Albany-Saratoga Speedway on Friday, September 10 before its conclusion on Sunday, September 12 back at Glen Ridge Motorsports Park.