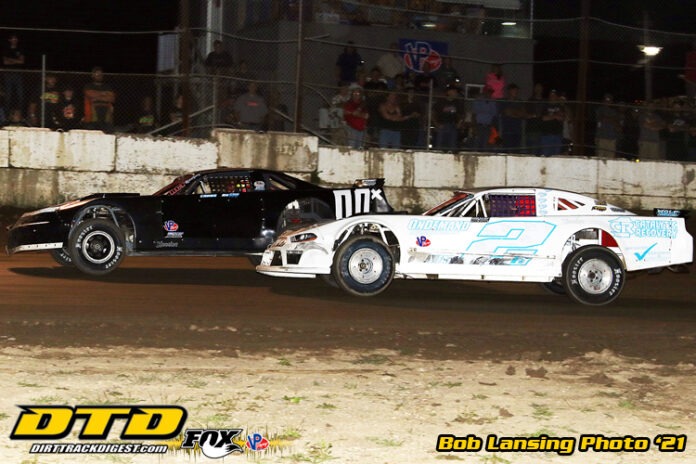 FULTONVILLE, NY – With 15 laps to go, Josh Coonradt, driver of the #00X, passed rival Luke Horning to win the $1,500 winner’s share at Glen Ridge Motorsports Park in the DIRTcar Pro Stock Series kickoff. Horning settled for second and Beau Ballard made an amazing run through the field in the last 10 laps to take the final podium position.

Not only did Coonradt earn the $1,500 payday for winning the 40-lap Series Feature, but he also took $100 for his Heat Race win and another $100 for the fastest lap in Time Trials courtesy of Classic Muscle Parts. The Feature however was not a layup by any means.

On lap one in Turn Two, the pole sitter Andy Graves drove in hard and skated up the track collecting multiple cars. Robert Yetman, Mike White, and others took damage. Yetman was able to rejoin and drove all the way to the front and even ran third before fading and finishing fifth.

While Josh Coonradt loves to win, he also wants to beat the best on the race track. Unfortunately, the lap one incident took out some of his top competitors.

“It kind of sucks that that lap one wreck happened,” said Coonradt. “It took out a lot of good cars. We were fortunate to get through it.”

The #00X started in the eleventh starting position after an unlucky redraw. After hustling up through the early wreck, Coonradft still had to make plenty of on-track passes for the win.

Former champion Robert Yetman drove up through the field from the back after suffering a flat tire and even passed eventual winner Coonradt for third.

“When Yetman went by us on the top I thought I wasn’t going to have it but then the car kept getting better and better every lap,” said Coonradt.

Luke Horning, in the #2H, was the early race leader. He held the point position until 15 laps to go when Coonradt made the overtake with a great launch off the bottom of Turn Four. Once Coonradt dispatched Horning it was all #00X until the checkered flag.

“I think we just needed an open track,” said Coonradt. “I’m just happy to be here. Thanks to Luke for running me clean. To be able to drive by him is a big deal.”

Beau Ballard also had an exciting trip to the podium. Ballard started fifth and battled on the top half of the field until he cut down a right rear tire.

“We cut down a right rear and thankfully we had guys out here to help get us back on track,” said Ballard.

Ballard drove hard to make it back up to the front. He was in 14th with nine laps to go. He had his Pro Stock sailing on the top side and reeling in the leaders before running out of laps. Ballard settled for third.

The next DIRTcar Pro Stock Series race is on Friday, Sept. 10 at Can-Am Speedway followed by Weedsport Speedway the next day on Saturday, Sept. 11.