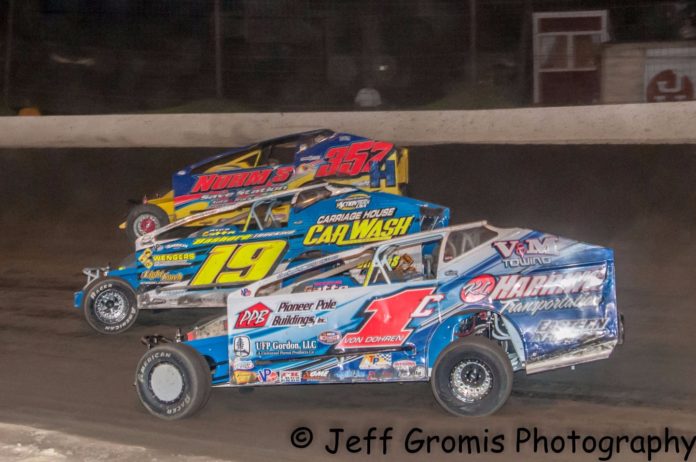 BECHTELSVILLE, PA – When auto racing gets the green flag for the 2017 season at NASCAR sanctioned Grandview Speedway a fresh clay racing surface will be in place. “We had a window of opportunity during the second week of November and took advantage of it,” said Assistant Event Organizer Kenny Rogers. “Bashore Trucking was called in to oversee the resurfacing project. With Bashore’s support along with Bill Ryland and a few others we were able to lay down close to 100 truckloads of some of the best looking clay I have seen in a while.”

The Outlaw Enduros and Blast from the Past Vintage racers will get to test the new surface when they open the 2017 season, the 55th consecutive racing season, on Sunday, March 19th.

Then on Saturday, March 25th the annual free to the public practice session will take place with the track open to all types of racing equipment. Action gets started at noon. Many of the T.P.Trailers Modifieds, Late Models and Sportsman stock cars will be using the practice day to ready for the official season opener set for Saturday, April 1, 7 p.m.

There is one correction to be made on the new racing schedule. A 40-lapper is listed for Sportsman on June 3rd and June 17th. Only the June 3rd date is correct for the 40-lapper.

The annual track rules meeting with track officials taking part was held recently. Only a few MINOR rule changes have been implemented for the 2017 season. The Modified division will not be permitted to use W-16 engines and Sportsman will be permitted to race using aluminum wheels.

However there was a discussion regarding a POSSIBLE new affordable division of stock car racing being put in place for the 2018 season. “We have been tossing this idea around for a while,” said Rogers. “We hope to come up with an affordable and fun division in which someone can put a race car together for less than $2,000 to compete and have fun. Hopefully by the middle of the 2017 season we will have a plan in place for the new division.”

The schedule for the 2017 season can be found at www.grandviewspeedway.com and on Grandview Speedway’s Facebook site. Additional information can be had at 610.754.7688.

A color brochure outlining all marketing opportunities available at Grandview Speedway can be emailed to those expressing interest. Contact Ernie Saxton Communications, Inc. at Esaxton144@aol.com or telephone 267.934.7286.