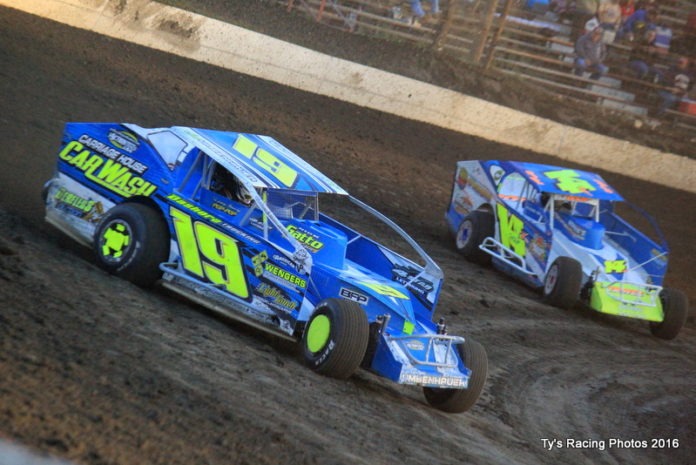 BECHTELSVILLE, PA – With just eight weeks remaining before the 55th season of stock car racing gets underway at Grandview Speedway interest continues to grow in the NASCAR sanctioned Saturday night racing action which will once again feature the T.P.Trailers 358 Modifieds, Late Models and Sportsman stock cars.

The annual free-to-the-public practice session will kick things off on Saturday, March 25th at noon. And the following Saturday, April 1st, the battle for the lucrative point championships will kick off with a 7 p.m. show featuring the Modifieds, Late Models and Sportsman.

Again this year racers that use VP racing gasoline will be able to earn some great benefits based on a program announced by track operators, the Rogers family, and VP Racing Fuels.

As in previous seasons the top finishing racer in each of the three NASCAR divisions racing at Grandview each Saturday night will earn product awards. For the T.P.Trailers 358 Modifieds there is a $150 product award for the top finishing racer that can show he has used VP racing gasoline, had VP decals clearly visible on each side of the race car and has a VP patch on his or her uniform. In the Late Model division there will be a $100 product award and the Sportsman racers will earn a $75 product award provided they meet the requirements set for the awards.

In addition VP Racing Fuels is posting a $100 VP product award for the overall Hard Charger out of the three divisions each Saturday night.

VP is also a banner advertiser on the Grandview website.

VP Racing Fuels Regional Manager Tim Hogue said, “We appreciate the support given our product by the racers and we want to show the racers support for their racing efforts.”

Fans are also reminded that season passes remain available that cover a reserved seat for all Saturday night events, April through September. The price is still $350. Send a check covering the passes being ordered along with a self-addressed stamped envelope (to speed delivery) to Grandview Speedway, 87 Wilt Road, Bechtelsville, PA 19505.