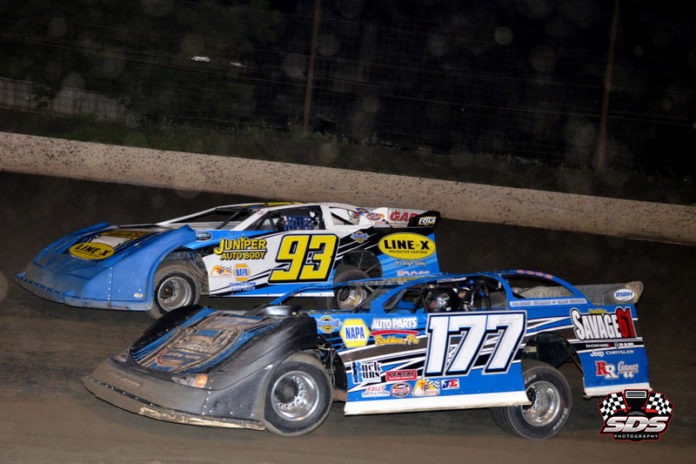 Lee will be providing two MBH Late Models for Shuey. The team will make a full time effort at Grandview Speedway with the first official NASCAR point chasing outing being in the April 1st season opener at the NASCAR sanctioned one-third-mile, banked clay oval. The BRC Late Models will be featured along with the TP Trailers NASCAR 358 Modifieds and Sportsman racers.

In addition the Shuey/Lee combination will head south to participate in the Mason Dixon Shootout Series.

Their first outing of the season will be at Port Royal, PA Speedway on March 25th.

Primary sponsorship for the 2017 Late Model racing effort will come from Savage 61 Chrysler, Dodge, Jeep and Ram dealership located in Reading, PA along with Out of Our Minds Art Studio housed in Macungie, PA. Both businesses are increasing their support for the popular race team.


In addition there will be support from Diamond Game Service, Reading, PA; RR Games located in Birdsboro, PA along with Birdsboro NAPA Auto Parts, Buck Rubs Gentlemen’s Club of Leesport and Shankweiler’s Drive In of Orefield, PA.

Hershey Race Engines will provide the power while Penske Shocks/Dave Reedy return to offer support. And new this year will be DMI Machine/Bulldog Rears.

Again this year the Shuey/Lee Late Model team will be supporting the Animal Rescue League of Berks County with their attractive t-shirts being offered for sale. Half of the proceeds will go to the charity that does so much for animals. Last year the team was able to donate more than $1000 and this year they are hoping to make an even larger contribution.

Grandview Speedway, Bechtelsville, PA will be holding their annual free-to-the-public practice session on Saturday, March 25th at noon and the session is open to all types of racing vehicles.

Season passes remain available for $350 and cover all Saturday night racing events, April through the Freedom 76 Classic in September. Checks covering the number of season passes being ordered should be sent to Grandview Speedway, 87 Wilt Road, Bechtelsville, PA 19505. Please include a self-addressed postage paid envelope to speed the return of the passes.

Grandview Speedway, one of the most successful NASCAR weekly short tracks in the nation, is located on Passmore Road in Bechtelsville, PA, 10 miles north of Pottstown on Passmore Road. Telephone 610.754.7688 for information or check in at www.grandviewspeedway.com or on Facebook.