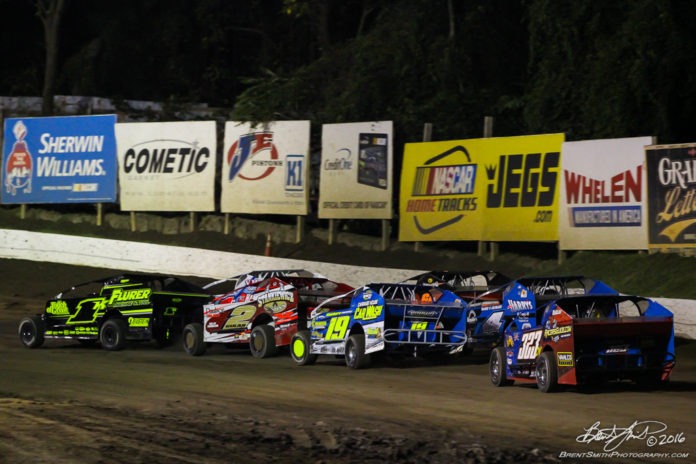 BECHTELSVILLE, PA – When the 2017 NASCAR stock car racing season kicks off at Grandview Speedway Joe “Geezer” Fanelli will be moving from the BRC Late Models to the primary class of competition, the NASCAR T.P.Trailers 358 Modifieds.

The veteran racer will be fielding his own race car as he challenges some of the best in the business when the battle for the track and NASCAR titles gets underway on Saturday, April 1st at 7 p.m. Again this year the Saturday night action on the one-third-mile, banked clay over will feature the 358 Modifieds, BRC Late Models and Sportsman stock cars.

Fanelli, a veteran racer who has performed in many divisions of racing competition, will be making his first start in the T.P.Trailers 358 Modifieds. During his colorful auto racing career he has performed with Late Models, Sportsman, Legends, 600 Modifieds and more. He has three feature wins to his credit in the 600 Modifieds and was the winner of the 2010 Northeast Small Car Nationals.

The 53-year-old Physical Plant Manager and former professional musician shows that he is multi-talented as he is also an undefeated boxer, an adult league golf champion and has earned a number of titles in hockey.

Nothing would make the Exton, PA married father of two happier than to be able to perform well and “hold his own” against such outstanding Grandview Speedway racing talents as defending champion Craig VonDohren, former champions Jeff Strunk, Duane Howard and Ray Swinehart and the long list of other talented racers that perform at the Bechtelsville, PA speed plant.


When asked what has changed in his life over the last ten years that can be attributed to auto racing, the popular racer said, “My waist is growing (a lot of donuts), my bank account is shrinking and my hairline is receding.”

Because of his dedication to the sport and his attention to detail with regard to his sponsors, Fanelli has a long list of sponsors that support his racing efforts including JDT Construction, Horn Plumbing and Heating, Kistler Log Home Maine Vacation Rentals, Keystone Air, Kelly Security, Exton Beverage, Art Smith Landscaping, Weso’s Italian Restaurant, Girgio’s Pizza of Exton, Haly Oil, Great Valley Propane, Checkered Flag Bakery and Webmaster-E.

Fanelli and many other area racers will be participating in the free-to-the-public practice session at Grandview on Saturday, March 25, 12 noon. And then the season for NASCAR racers will get the green flag on Saturday, April 1, 7 p.m. Spectator gates open at 5 p.m.

On Saturday, March 18, 1 p.m. the first Enduro and Blast from the Past Vintage racing doubleheaders will be presented. A March 19th, 1 p.m. rain date will be available in case of inclement weather.

There has been no increase in admission prices for the Saturday night NASCAR stock car racing events with adults paying just $15 and children under 12 being admitted free for the season opener on April 1st.

Season tickets priced at $350 will be available at the March 25th practice day. A season ticket offers a reserved seat for all Saturday events starting in April and running through to include the Freedom 76 on September 16th.

Grandview Speedway, one of the most successful NASCAR weekly short track operations, now in its 55th consecutive season of operation, is located on Passmore Road in Bechtelsville, PA, just off Route 100, ten miles north of Pottstown. Every seat offers an unobstructed view of the racing action and a full line of great concessions and novelty items is available. For more information check in at www.grandviewspeedway.com or telephone 610.754.7688.