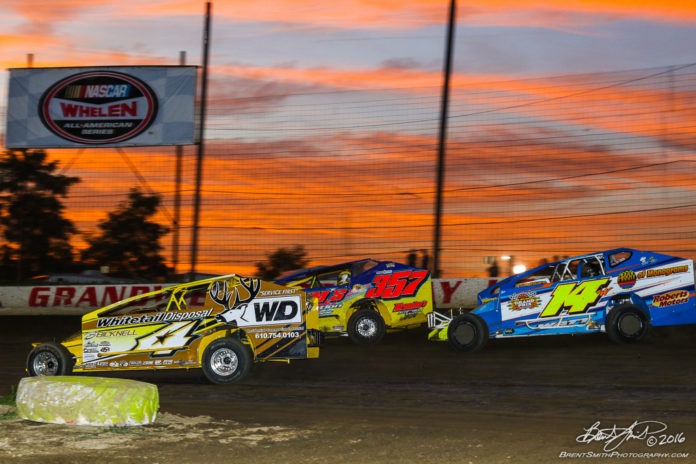 BECHTELSVILLE, PA – The twenty-eighth season of the NAPA Auto Parts Thunder on the Hill Racing Series will open on Sunday, May 28 at the Grandview Speedway with the return of the poplar Memorial Day Weekend Triple Thunder Thriller. On the program will be the Big Block Modifieds/358 Modifieds competing together in a series of qualifying events all leading up to the 40 lap $5,000 to win feature event. The first place prize is certainly an eye catcher complimented by a payoff of $1,000 to finish tenth and $500 just to start the main event. The Sportsman and MASS (Mid-Atlantic Sprint Series) sprint cars will also be on the race card offering heat race qualifying and a feature for both the Sportsman and Sprint Cars. Gates will open at 5 PM with race time set for 7:30 PM.

Long-time partner of the NAPA Auto Parts Thunder on the Hill Racing Series, Pioneer Pole Buildings – the region’s premier builder of post frame buildings –will again be on-board as a key marketing partner for the 2017 series of special events at Berks County’s Grandview Speedway. A great supporter of regional auto racing, Pioneer Pole Buildings can be seen emblazoned on the machines of many of Grandview Speedway’s regular competitors including 2016 Modified Champion, Craig VonDohren – a six-time Thunder on the Hill Series winner.

The Pioneer Pole Buildings mobile sales unit will be on display at all of the Thunder on the Hill Racing Series events kicking off on Sunday, May 28 at Grandview.

The NAPA Auto Parts Thunder on the Hill Racing Series of 2017 will continues just two-weeks later with the invading USAC National Wingless Sprint Car Series on Tuesday, June 13 competing with Grandview’s premier racing division the NASCAR 358 Modifieds. If you have never seen a wingless 410 sprint event, this is a must see show, especially on the high-banks at Grandview Speedway.

The 2017 racing season will include activities and promotions, providing fun for the fans with elements such as: Pre-Race Pit Tours, the Inside/Out Experience – where fans can sign-up to watch hot laps from the infield, take a ride in Eli’s AutoWorld Pace Truck, the Low Down & Dirty Radio Show pre-race Meet & Greet, JOE “THE PIZZA DUDE”, giveaways, fireworks, and appearances by Miss Thunder on the Hill, Lauren Fischer.


About Thunder on the Hill Racing Series

The brainchild of Grandview Speedway owner Bruce Rogers, special events promoter Bob Miller and local driving star Dave Kelly, the Thunder on the Hill Racing Series celebrates 27 years of the most anticipated events on the racing calendar year after year. In 124 events over $4.2 million dollars has been divvied up among the area’s fastest racers. What started as a single 410 Sprint Car event in 1990 has blossomed to feature a variety of racing action including: 358 Modifieds, USAC Wingless Sprints, All-Star Circuit of Champions, 360 & 410 Sprint Cars, Sportsman, Late Models, Midgets, Legends cars, DIRTcar and ROC Modified events.

Grandview Speedway is a high-banked one-third mile clay oval, celebrating their 55th Anniversary season in 2017. The facility offers free parking, quality food at reasonable prices (be sure to try the french fries), a program book, Grandview Speedway and Thunder on the Hill race wear and great viewing from every seat in the house. Race fans may take part in the Inside/Out promotion, where you can sign up (no charge) to watch warm-ups from inside turn four. Race fans are also invited to victory lane following the racing program and, race fans may enter the pits after the races to meet the drivers. Be ready to enjoy the spine-tingling fireworks salute on the feature event parade lap.