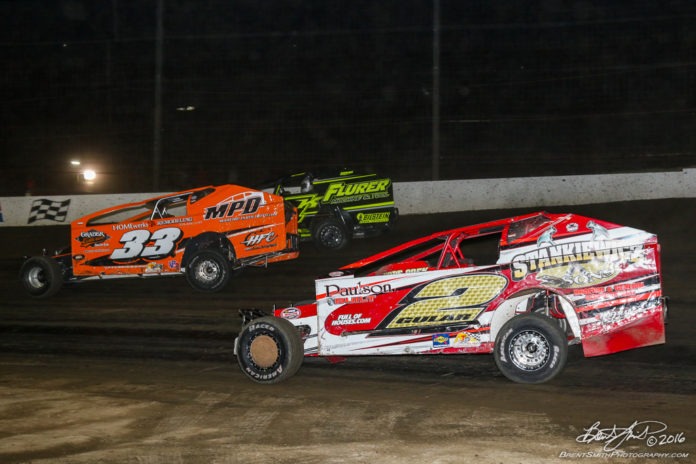 BECHTELSVILLE, PA – Despite all the efforts being made to be able to get the 2017 season started with a free-to-the-public practice session at Grandview Speedway on Saturday, Ma Nature has helped create different plans.

“Practice is postponed for tomorrow, due to wet grounds, and the forecast of more rain this afternoon,” said track spokesperson Tina Rogers. “We do not want to take the chance of having drivers ruin their equipment, for a track that cannot be prepared properly.

“We have been monitoring the grounds, and track conditions all week. We were hoping we could get on the track and prepare a good racing surface, however with not much sun, and the melting snow, it has left us with unraceable conditions and grounds.”

The practice session has been postponed until Saturday, April 1st following the same schedule for the day. Pit gates opening at 9 a.m. and practice, featuring a variety of different race cars, starting at noon. Pit admission is $30.

And the battle for the lucrative NASCAR and track titles at the one-third-mile, banked clay track will get the green on Saturday, April 8th when a tripleheader show featuring the T.P.Trailers 358 Modifieds, BRC Late Models and Sportsman stock cars will be presented. Spectator gates will open at 5 p.m. with racing starting at 7 p.m. At least 12 events of stock car racing will be presented.


Admission for the season opener will be $15 for adults with youngsters 11 and under admitted free.

On Sunday, April 9th 1 p.m. the Enduro racers and Blast from the Past Vintage racers will perform in a doubleheader show.

The first extra distance event of the season is set for Saturday, April 15th with a 35-lap main event for the T.P.Trailers NASCAR Modifieds being presented. That race will pay $3500 to win. In addition, as is the norm, the BRC Late Models and Sportsman will race.

Grandview Speedway, one of the most successful NASCAR Whelen All American Series short tracks in the nation, is located on Passmore Road just off Route 100, 10 miles north of Pottstown, in Bechtelsville, PA. The popular one-third-mile, banked clay track offers a great view from each seat, excellent reasonably priced concessions and will stocked novelty stand. Information can be had at 610.754.7688 or check in at www.grandviewspeedway.com.