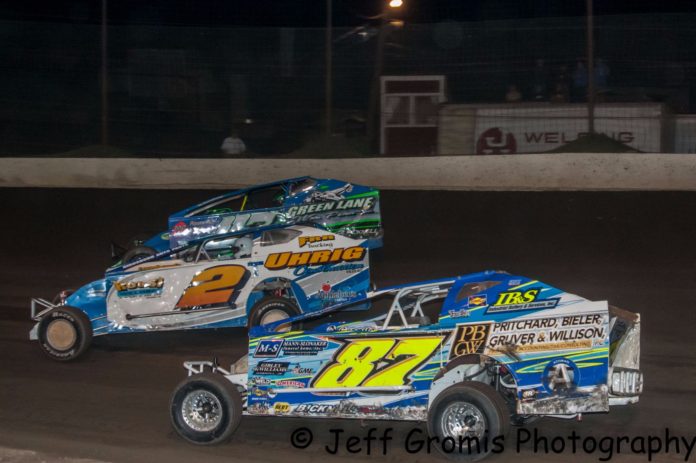 BECHTELSVILLE, PA – With practice completed on Saturday, delayed once by weather, the stock car racing battles get started this Saturday, April 8th, at Grandview Speedway. A tripleheader show of NASCAR racing featuring the T.P.Trailers 358 Modifieds, BRC Late Models and Sportsman stock cars will kick off the 55th consecutive season of stock car racing at the Bechtelsville track as racers battle for the lucrative NASCAR and track titles.

Many of the top talents in area dirt track Modified racing are expected to be in action including 10-time track champion Jeff Strunk, Craig VonDohren, Duane Howard, Frank Cozze, Ray Swinehart, Doug Manmiller and many others.

The 358 Modifieds will top off their qualifying heat races with a 30-lap main event while the BRC Late Models and Sportsman stocks will all follow their qualifying action with 25-lap feature races featuring the best performers of the night in action.

All the action will be recorded by RCN TV and shown on air at later dates.

Good news for race fans, in addition to all the exciting racing action being offered, prices for tickets for regular Saturday racing action will remain the same as they have been for a number of years. Adults are admitted for just $15 while youngsters 11 and under are given free admission. There will be increases in ticket prices for special Saturday night events.

Coming up on Saturday, April 15th will be the first special event of the season for the NASCAR racers with a 35-lap feature topping the program for the T.P.Trailers 358 Modifieds. In addition the BRC Late Models and Sportsman stock cars will see action. The modifieds will be racing for $3500 to win. Adult admission for this event will be $20 for adults while youngsters 6 thru 11 will pay $5. Kids under 6 are admitted free.

The first Sunday afternoon Outlaw Enduro and Blast from the Past Vintage Car doubleheader will take place on April 9th with a 1 p.m. starting time.

Grandview Speedway, considered one of the top performing NASCAR weekly short track in the nation, is a one-third-mile, banked clay oval located on Passmore Road, just off Route 100 in Bechtelsville, PA. The popular racing facility offers a full array of quality concessions are reasonable prices along with a well stock novelty stand. Fans are invited to visit the racers in the pit area after the events have been completed. For racing information telephone 610.754.7688, visit www.grandviewspeedway.com or check Grandview on Facebook and Twitter.