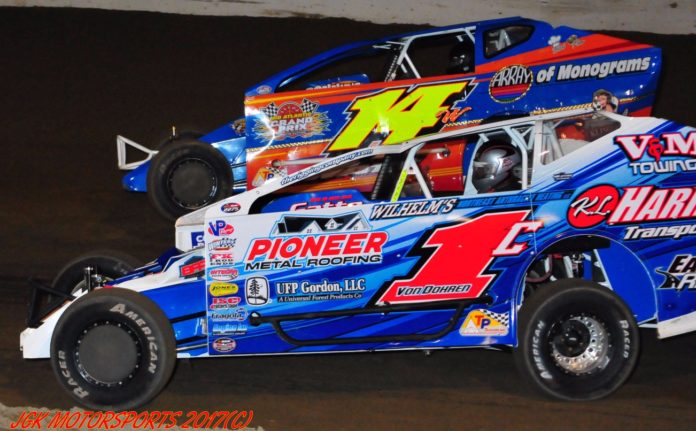 BECHTELSVILLE, PA – Extra money in the purse is always a great incentive for racers to give it their all and extra money is waiting for the winner of the 35-lap NASCAR TP Trailers 358 Modified feature on Saturday night at Grandview Speedway.

In addition to the increased laps for the Modifieds fans will also get to see the exciting Sportsman and BRC Late Models.

Veteran competitor Kevin Hirthler is coming off an opening night victory and will be considered a strong favorite to make it two in row. However Jeff Strunk, a 10-time track champion, finished second on Saturday and will be looking to make a strong run for the win. Past champions Craig VonDohren, Duane Howard and Ray Swinehart along with Doug Manmiller, Frank Cozze, Brett Kressley, and Jared Umbenhauer are all considered threats to take the $3500 first place money plus the TP Trailers and Truck Equipment bonus bucks along with VP Racing Fuels product award.

At least 12 events of racing will be presented featuring the Modifieds, Late Models and Sportsman as part of Checkered Flag Fan Club Night. Fans and racers will have the opportunity to renew or sign up for a new membership to this great fan organization.

When spectator gates open at 5 p.m. on Saturday the popular Low Down and Dirty Meet and Greet will be taking place at the main entrance area. Featured will be Modified racer Dan Waisenpacher, last week’s Late Model winner Ron Kline along with Sportsman racer BJ Joly.

On the schedule for Saturday, April 22nd is a four division show that will include the Modifieds, Late Models, Sportsman and Blast from the Past Vintage racers.

Saturday night racing action gets the green flag at 7 p.m. Adult admission for the April 15th show is $20 while youngsters 6 thru 11 will pay $5. Kids under 6 are admitted free.

Grandview Speedway, considered one of the top performing NASCAR weekly short track in the nation, is a one-third-mile, banked clay oval located on Passmore Road, just off Route 100 in Bechtelsville, PA. The popular racing facility offers a full array of quality concessions are reasonable prices along with a well stock novelty stand. Fans are invited to visit the racers in the pit area after the events have been completed. For racing information telephone 610.754.7688, visit www.grandviewspeedway.com or check Grandview on Facebook and Twitter.