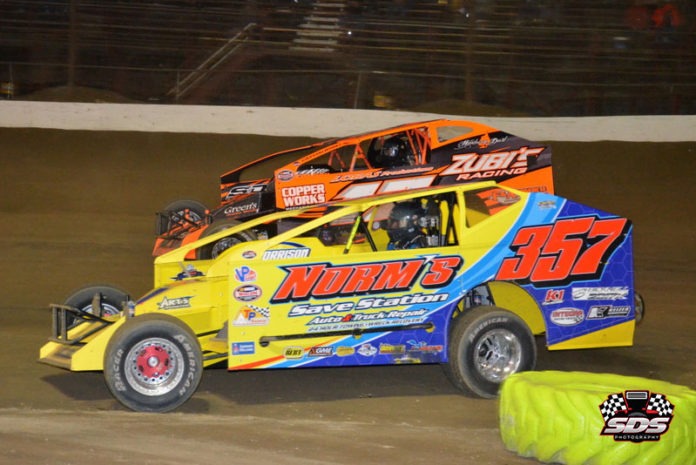 BECHTELSVILLE, PA – The twenty-eighth season of the NAPA Auto Parts Thunder on the Hill Racing Series will open on Sunday night, May 28 at the Grandview Speedway. The popular series that is sponsored by NAPA Auto Parts and presented by Pioneer Pole Buildings will open with the Big Block Modified/358 Modified Showdown competing in a series of qualifying events leading up to the 40 lap feature paying $5,000 to the winner, $1,000 for tenth and $500 just to start the main event for pre-entered drivers. Also on the card will be the Sportsman and MASS Sprint Cars, competing in qualifying events leading up to a 25 lap Sportsman feature and a 20 lap sprint car feature.

Modified drivers pre-entered for this event include Craig VonDohren, New York modified driver Keith Flach, Billy Pauch Jr, Jared Umbenhauer, Kevin Hirthler, Kyle Weiss, Danny Bouc, Brett Kressley and John Willman to name a few. There is no entry fee and drivers or car owners may enter by calling 443-513-4456. Even for race teams that do not Pre-enter, a very attractive payoff will offer $4,000 to win $400 to take the green flag in the feature event. This event is also a point race for the season-long NASCAR points.

The Pioneer Pole Buildings mobile sales unit will be on display at all of the Thunder on the Hill Racing Series events including the Sunday, May 28 Triple Thunder Thriller. Gates will open at 5 PM with qualifying getting underway at 7:30 PM. Admission prices are $25 for adults, $10 for children 6-11 and children five and under will be admitted free. The pit fee is $35 and a license is not required.

The 2017 racing season will include activities and promotions, providing fun for the fans with elements such as: Pre-Race Pit Tours, the Inside/Out Experience – where fans can sign-up to watch hot laps from the infield, the Low Down & Dirty Radio Show pre-race Meet & Greet, JOE “THE PIZZA DUDE”, giveaways, fireworks, and appearances by Miss Thunder on the Hill, Lauren Fischer.


NAPA Auto Parts continues their long run with Thunder on the Hill as the Series title sponsor, joined by Pioneer Pole Buildings, Quaker Steak and Lube, and GALCO Business Communications.

About Thunder on the Hill Racing Series
The brainchild of Grandview Speedway owner Bruce Rogers, special events promoter Bob Miller and local driving star Dave Kelly, the Thunder on the Hill Racing Series celebrates 28 years of the most anticipated events of the racing calendar year after year. In 124 events over $4.2 million dollars has been divvied up among the area’s fastest racers. What started as a single 410 Sprint Car event in 1990 has blossomed to feature a variety of racing action including: 358 Modifieds, USAC Wingless Sprints, All-Star Circuit of Champions, 360 & 410 Sprint Cars, Sportsman, Late Models, Midgets, Legends cars, DIRTcar and ROC Modified events.