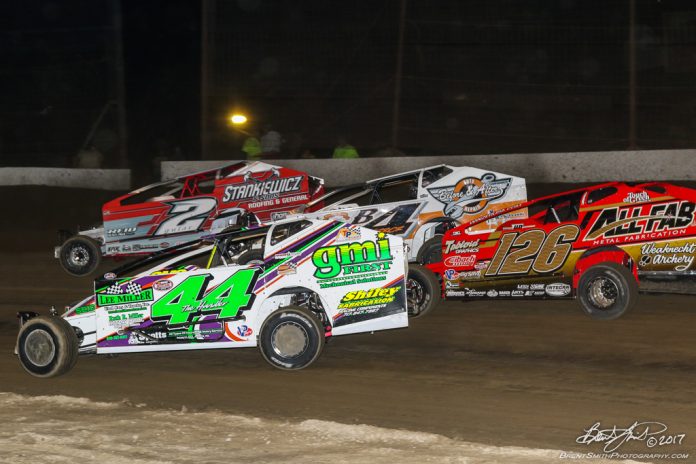 BECHTELSVILLE, PA. April 30, 2017. . .The new winner’s streak continued at Grandview Speedway on Saturday night.  Back after a week hiatus courtesy of Mother Nature, 35 Modified, 18 Late Model and 34 Sportsman drivers were ready to mix it up in qualifying events to participate in their respective features on Saturday night at Grandview Speedway and three new feature winners put their names in the record book.

After three Saturday nights of NASCAR stock car racing there have been nine different feature winners.

Doug “The Handler” Manmiller dove underneath leader Ryan Grim to take the lead away on the 24th lap of the 30-lap NASCAR T.P. Trailers 358 Modified feature and proceeded to win his first feature of the current campaign behind the wheel of the Jason Miller-owned No. 44M. Manmiller ran high and low until the bottom line came in and he could make his move. With five laps to go Manmiller dealt with lap traffic and as long as they held their line he knew what maneuver to make to keep the others in tow.

A new name was added to the win column in the BRC NASCAR 25-lap Late Model feature. Blaine Emery, who returned to the 1/3-mile oval after missing several seasons, held off the challenges of opening night winner Ron Kline until he encountered problems with a lap car and later Kyle Merkel. It was Emery’s first career win despite having overheating problems.

Second year racer Dylan Swinehart overcame the sophomore jinx to collect his second career win and his first of the year in the 25-lap NASCAR Sportsman feature. He didn’t have an easy time capturing the win. Earlier he lost the lead to rookie Jeromy Guistwite on a restart, but on another restart he kept the pedal to the metal and regained the lead. In later stages he was able to withstand Mark Kemmerer’s continuous bids.


Providing all feature winners had the TP Trailers decal and the VP Racing decals if they ran gas in addition to meeting all the necessary requirements, they received monetary awards from T.P. Trailers and products awards from VP.

Fans heading out to Grandview Speedway for Saturday night NASCAR stock car racing action are reminded that starting this Saturday the spectator gates open at 5:30 p.m. and racing will start at 7:30 p.m. As is normal the Saturdaynight show will feature the TP Trailers 358 Modifieds, BRC Late Models and Sportsman. At least 12 events of racing.

Harris, who was having a strong run chasing down Erb, brought out the first caution when he stopped in the first turn after smoking the previous laps.

Erb maintained the lead on the restart with Grim now in second.

Lap 13 was not a lucky one for Erb since for the second time while leading, he stopped between turns three and four with mechanical problems. This time it appeared to be a broken front-end suspension. Erb’s misfortune was Grim’s fortune as he now inherited first. On the restart cars stacked up behind Grim were Manmiller, Mike Gular, Kyle Borror and John Willman.

Grim, who received the Dan’s Deli ½-way hoagie award, and Manmiller battled side-by-side for several laps with Grim taking the high line and Manmiller the inside groove with neither one giving up.

Manmiller took advantage to take over the lead on the 24th lap when Grim pushed up high in turn four and Manmiller dove underneath.

Behind the front pair anticipating a false move were Gular, Borror and Jared Umbenhauer. Lurking in the wins trying to get into the top five were Craig Von Dohren and Jeff Strunk.

Gular overtook Grim with two laps to go and tried to reel in Manmiller, but ran out of time.

At the drop of the checkered Manmiller was in victory lane for the first time since September 3, 2016. Chasing him across were Gular, Grim, Borror and Von Dohren.

Emery passed Shawn Horning for the lead on the second lap of the Late Model feature with Kline following through at the same time for second.

Kline’s bid for another victory was erased after he made contact with the lapped car of Jordan Knepp and hit the first turn wall.

On the restart Cory Merkel, running fifth, spun in the first turn with several others involved. The next attempt at another lap was better as Emery was still first trailed by Kyle Merkel, Steve Wilson, previous winner Brian Shuey and Chuck Schutz.

In the closing stages a three-way battle for first ensued between Emery, Merkel and Shuey.

Emery kept everyone at bay and went on to chalk up the victory and also received the Dan’s Deli ½-way hoagie award. Finishing second was K. Merkel followed by Shuey, Wilson and Schutz.

Heats were won by Shuey and Emery.

The beginning of the Sportsman feature was a rather scary one when Ryan Shupp and Nathan Mohr made contact and Mohr took a wild flip in turn one. Several others were also involved with Jordan Henn, left with nowhere to go, had Mohr’s car landing on top of his. Mohr and the others escaped injury, but Henn was taken to the hospital to be checked as a safety precaution.

Craig Whitmoyer brought out another yellow when he spun in the second turn on the second lap. On the restart Swinehart got the edge on Guistwite and moved into first.

The pair battled feverishly and neither one was ready to stop trying.

A first turn multi-car accident on lap six had the yellow waving again. On the restart Swinehart pushed up a bit off turn four and Guistwite was back in front.

Kyle Lilick spun in the second turn on the 13th lap. The restart was void since Eckert Jr., having a solid run, stopped in the third turn. This time Swinehart was determined to regain first and he did just that as Guistwite couldn’t hold off the hard charger since he had his hands full holding off Kemmerer and Housworth.

Kemmerer, whose car was badly damaged from the first lap incident, wasn’t deterred by how the car looked; overtook second to begin challenging Swinehart.

Housworth got out of shape in turn four, corrected it and continued. Guistwite, left with no place to go, spun for the final caution with three laps remaining. Swinehart held his pace with Kemmerer right behind.

Swinehart never surrendered the lead once he regained it and was in the winner’s circle for the first time followed by Kemmerer, Housworth and opening night feature winner Brian Hirthler and rookie Louden Reimert.

Guistwite, Ryan Higgs and Swinehart won the heats. The consi was won by Kyle Lilick.