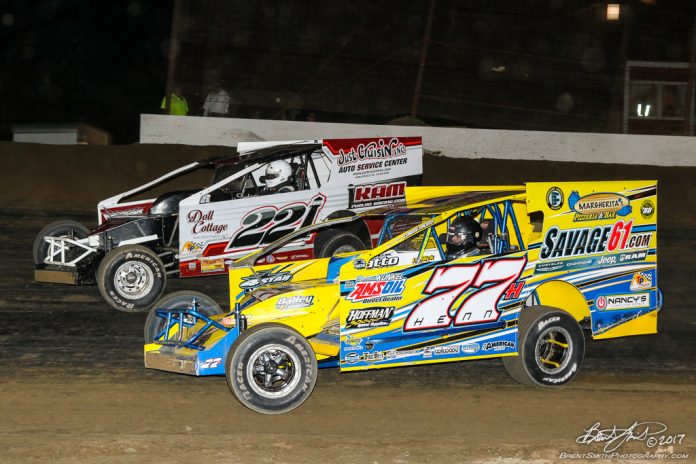 BECHTELSVILLE, PA – Everyone coming out to Grandview Speedway this Saturday night to see the exciting NASCAR sanctioned stock car racing action is being asked to wear something yellow. And the reason for that request is to help support Jordan Henn’s recovery from injuries sustained during a wild multi-car accident a couple Saturdays back.

Henn, the defending Sportsman champion, faces a lengthy recovery and the show of support from fans and racers would go a long way to help him as he recovers and gets back to racing.

The Saturday, May 13th tripleheader, will feature the TP Trailers NASCAR 358 Modifieds, BRC Late Models and Sportsman racing in at least 12 events. Fans have the opportunity to see many of the top talents in dirt track racing taking part. Spectator gates open at 5:30 p.m. with racing starting at 7:30 p.m. Fans are invited to participate in the weekly Low Down and Dirty Meet & Greet which takes place at the main gate as the ticket booth opens. Featured this week will be Modified talent Kyle Borror, Sportsman racer Jack Butler and Late Model standout Brian Shuey.

Adult admission is $15 while youngsters 11 and under are admitted free. Fans are offered free parking on the speedway grounds.


Speedway management has announced that they are planning to change to TIMED HOT LAPS for the BRC Late Models rather than qualifying heats. At the Saturday night drivers meeting, held before rains wiped out the racing, the plans were discussed with racers and their thoughts were invited. The Late Model competitors recognize that changes are needed and were on board with the discussions. The change will be instituted in the next week or two after final details have been ironed out with points and more.

Coming up on Saturday, May 20th is TP Trailers and Truck Equipment Night which will be a four division show consisting of TP Trailers Modifieds, BRC Late Models, Sportsman and Blast from the Past Vintage racers.

Information on racing at Grandview can be found at www.grandviewspeedway.com and on Facebook plus Twitter. Track phone number is 610.754.7688.