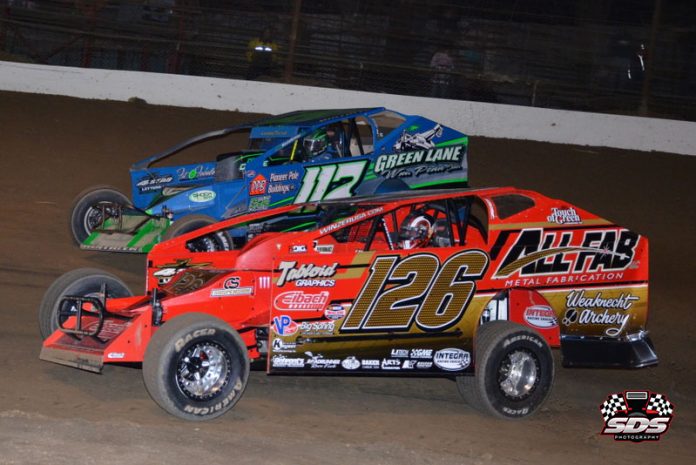 BECHTELSVILLE, PA – With two straight Saturday night NASCAR stock car racing programs rained out there are dozens of racers anxious to get back in action including the nine that have been fortunate enough to win features during the rain plagued season. Getting back to racing this Saturday night with the TP Trailers and Truck Equipment Night there is the makings of some very tough battles for not only the feature winners but all the racers as the chase for the lucrative NASCAR and track championships continues.

Again this Saturday fans and racers are asked to wear yellow to show support for defending Sportsman champion Jordan Henn who was injured in an accident a few Saturdays back and is facing a long recovery.

Some lucky fans will have the opportunity to win tickets for the June 2-4 Dover International Speedway NASCAR races courtesy of WNPV-AM Radio in Lansdale.

Winners so far this season in the TP Trailers 358 Modifieds have included Kevin Hirthler, Kyle Weiss and Doug Manmiller. In the BRC Late Models division wins have been earned by Ron Kline, Brian Shuey and Blane Emory. And in Sportsman action Brian Hirthler, Ryan Lilick and Dylan Swinehart have visited victory lane.

With rain wiping out the last two Saturdays of racing the point standings remain the same as what they were at the beginning of the month. Current standings show defending champion Craig VonDohren on top in the TP Trailers NASCAR 358 Modifieds. In the Sportsman Brian Hirthler, feature winner on opening night, leads the standings. And in the BRC Late Models defending champion Chuck Schutz has 685 counters which is just two points better than second place Kyle Merkel.


Racers in the NASCAR sanctioned Saturday night action throughout the season race for lucrative prize money along with the TP Trailers and Truck Equipment bonus bucks plus VP Racing Fuels product awards.

NASCAR stock car racing on Saturday (May 20) will feature a four division show of TP Trailers NASCAR 358 Modifieds, BRC Late Models, Sportsman stock car racing along with Blast from the Past Vintage Car racers. Fans will also be able to meet a few of the drivers as part of the Low Down and Dirty Internet Radio Meet & Greet happening at the main gate at 5:30 p.m. Featured drivers, with cars, will be Modified racer Kyle Borror, Sportsman talent Jack Butler and Late Model standout Brian Shuey.

Fans are reminded that racing now starts at 7:30 p.m. each Saturday thru until the season ending Freedom 76 Classic. Spectator gates will open at 5:30 p.m. Pits open at 3 p.m. and a NASCAR license is required to enter the pit area.

Everyone is reminded to sign up with Rainout.com to receive notice when events are rained out.

Information can be had at www.grandviewspeedway.com, Facebook, Twitter or 610.754.7688. The one-third-mile, banked clay track is located on Passmore Road in Bechtelsville, PA just 10 miles north of Pottstown.