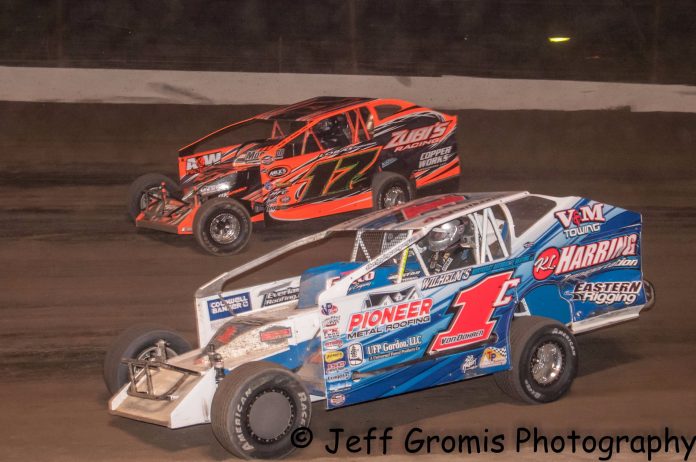 BECHTELSVILLE, PA – Saturday night racing action finally returned to Grandview Speedway after two weeks off courtesy of Mother Nature with four different winners and one repeat winner in the respective classes in the T.P. Trailer and Truck Equipment sponsored night.

The T.P. Trailers 30-lap NASCAR 358 Modified Feature saw New York native Brian Krummel, who left his hometown track of Middletown, N.Y., mid-season last year to pilot the David Zubikowski Racing No. 17Z, finally had his dream come true when he captured his first career win at the track. An emotional victor, with tears in his eyes, thanked Zubi and the entire crew for giving him a wicked fast car. Being somewhat “gun shy” to go on the outside after what he encountered in the opener, Krummel was able to run the high line and felt at ease. An impressive field of 38 Modifieds were on hand can cut to 28 feature starters by four qualifying heat races.

Wayne Pfeil sporting a huge No. 7, dedicated to his father Wayne who passed away last year, with a smaller No. 72 in the middle; led the 25-lap BRC NASCAR Late Model feature from start to finish for his season first victory.

The NASCAR Sportsman division had their first repeat winner of the year when Ryan Lilick stood in the winner’s circle once again at the drop of the checkered in the 25-lap event.


The Blast From The Past Vintage racers ran the Modified and Vintage Cars in a combined 15-lap feature event. Ron Myers won the Modified portion while Andy Cassel, who finished fifth, was declared the winner in the Vintage Car ranks with the highest finish.

Mike Kellner, appeared to be finally having a change of luck when he took the early lead at the onset of the Modified feature and wasted no time building up a healthy lead being chased down by Steve Swinehart, Danny Erb, Chris Esposito and Brett Kressley.

Kellner and the other front runners encountered heavy lap traffic with 11 laps in the books and had to use heads up tactics.

Kressley brought out the yellow on lap 13 when he stopped on the backstretch while running fifth. Kellner kept the momentum going for first with Swinehart, Esposito, Erb and now Krummel completing the top five.

Two laps later the yellow waved for a slow moving Blaine Bracelin in the second turn. Before action went green again Swinehart, running a solid second, went pit side out of contention turning the spot over to Esposito. Krummel advanced to second on the 17th lap to pressure Kellner.

Lady Luck wasn’t with Kellner as he came to a stop in the first turn for the 18th lap caution ending his solid run and surrendering the lead to Krummel.

The restart was void as Erb got somewhat out of shape going into turn one. Cars scrambled to avoid contact, however, he still was hit and spun putting a damper on his night, for the final caution. The front five were now comprised of Krummel, Jared Umbenhauer, Craig Von Dohren, Esposito and Jeff Strunk. Making bids for a top five spot was Kyle Borror and he made is stick on the 23rd lap when he got past Esposito.

In the final stages the first three were bumper-to-bumper, but in the end Krummel was the big winner for a hard-fought well-deserved win. Von Dohren narrowly edged out Umbenhauer at the line trailed by Strunk and Borror.

Bracelin, Krummel, Erb and Esposito scored the heat wins. The consies were won by Duane Howard and Doug Manmiller.

In Late Model action Pfeil charged past Kyle Merkel and into the lead at the drop of the green followed by Steve Todorow, Chuck Schutz and Bryon Sipe.

At the conclusion of nine laps Pfeil built up a comfortable margin over the rest of the pack and he had to bid his time with the lap cars.

The pack regrouped when Shawn Horning slowed in the second turn on the 14th lap for the caution. Pfeil wasted no time staying ahead while Merkel, Todorow, Schutz and Ron Kline waited for a miscue.

No one was able to overtake Pfeil as he went on to score his tenth career victory at the track chased across the line by Merkel, Todorow, Schutz and Sipe.

Schutz was the fastest in the timed hot laps, something new they are trying for the late models.

Sportsman feature action saw rookie racer Jeromy Guistwite grab the early lead at the drop of the green and set the pace for four laps before he almost spun. Nathan Mohr took advantage of the situation to pass Guistwite for the lead.

While Mohr, who was back in action after a horrendous homestretch flip April 29 showed the way, Guistwite, Ryan Shupp, Dean Bachman and Ryan Lilick diced for positions with it constantly changing.

Mohr’s sizeable lead was erased on the 17th lap after Joe Funk III rode the backstretch wall and came to a stop with a right front flat tire. On the restart Guistwite, Lilick and Craig Whitmoyer all charged past Mohr.

The lead changed for the fourth time on the 21st lap when Lilick got underneath Guistwite to take over the top spot.

Dylan Swinehart and Mark Kemmerer tangled along the homestretch for the 21st lap caution. On the restart Whitmoyer’s engine expired with a huge puff of smoke. Everyone was jammed up behind him and as a result Mike Lisowski flipped onto the inside homestretch wall with Guistwite also involved. Everyone was uninjured, but their cars were badly damaged. Lilick held on to first on the restart with pressure from Mohr, Brian Hirthler, Ryan Beltz and Shupp.

At the wave of the checkered Lilick won his seventh career feature followed by Mohr, Hirthler, Beltz and Shupp.

The heats were won by Guistwite, Jack Butler and Mohr. Kyle Lilick won the consi.

The Sportsman stocks will be featured on Saturday, June 3 with a $1,500 to win 40-lap main event. Also in action will be the TP Trailers 358 Modifieds and BRC Late Models. Adult admission is $20 for this special event while youngsters 6 through 11 pay just $5 while kids under 6 are admitted free.