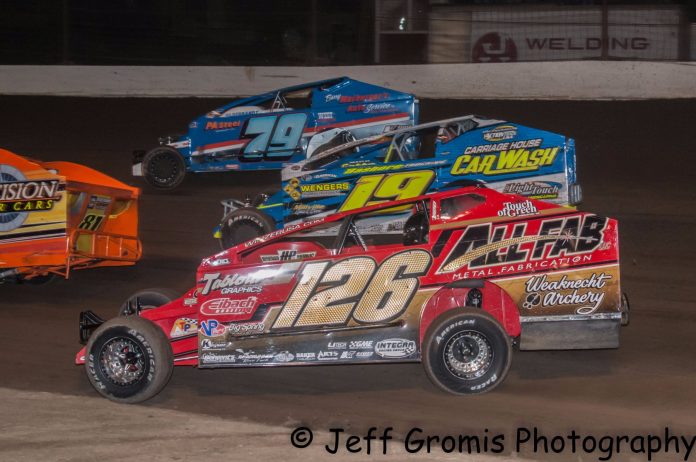 BECHTELSVILLE, PA – The NAPA Auto Parts Thunder on the Hill Racing Series kicks off 2017 with the Main Event of Memorial Day Modified racing.

On Sunday, May 28, the region’s top drivers head towards Grandview Speedway for the Triple Thunder Thriller – a three-division special event headlined by a Big-Block vs. 358 Modified showdown on the ultra-exciting Berks County dirt track.

Racers from PA, NJ, NY and DE have pre-registered for the most significant event of the weekend – the 40 lap Triple Thunder Thriller and a lucrative $5,000-to-win, $1,000 for 10th place, and $500-to-start payout structure.

The Pennsylvania ‘Triple Threat’ are set for action with Craig Von Dohren aboard the Dick Biever-owned No. 14s; Jeff Strunk with the Glenn Hyneman-owned No. 126; and Duane Howard in Norm Hansell’s potent No. 357. These three competitors hold more wins than anyone in Grandview Speedway’s 55-year history and have claimed the past 16 years of Championships.

Knocking down the door looking for his first Thunder on the Hill Racing Series win is 33-year-old Harleysville, PA driver Mike Gular. After a consistent 2016 season – including 11 top-5 finishes – Gular finished second in the season’s point standings and will climb aboard the Stankiewicz & Sons Roofing No. 2 machine.


Doug Manmiller, a four time Thunder on the Hill feature winner has already scored a win at Grandview in 2017 and he would like nothing more than a $5,000 pay day. Manmiller’s last Thunder victory was way back in 2008 and he is all geared up to stand on the podium.

With three wins in 2016, Wind Gap, PA’s Frank Cozze was a force at Grandview Speedway. The Hall of Fame racer will pilot the Renaldo’s Mechanical No. 401, chasing the $5,000 jackpot.

Waving the flag for the Garden State is Frenchtown, NJ’s Billy Pauch Jr. “The Kid’s Kid” is no stranger to Grandview Speedway Victory Lane and has solidified his position as one of the region’s top racers. Pauch will pilot the potent Breitenstein Motorsports No. 14.

Modified drivers interested in competing on Sunday, May 28 are encouraged to pre-enter by calling 443-513-4456 or by visiting www.tothracing.com. THERE IS NO ENTRY FEE for this Special Event.

The Sportsman division takes to the 1/3-mile dirt track in a 25 Lap Feature Event that offers a $1,300 payday to the winner and the newly formed Mid-Atlantic Sprint Car Series is anxious for their first Grandview Speedway appearance.

Helping to celebrate the Memorial Day Weekend will be a stunning fireworks display on the parade lap of the main event.

The Pioneer Pole Buildings Mobile Sales Unit will be on display in the mid-way along with all of the Thunder on the Hill Racing Series mainstay promotions including the Low Down & Dirty Radio Show pre-race Meet and Greet, pit area tours, the Inside/Out Experience – where fans can watch hot laps from the infield, Joe ‘The Pizza Dude’ offering up free pizzas to the rowdiest fans, give-a-ways, and appearances by Miss Thunder on the Hill, Lauren Fischer.

Spectator gates will open at 5 PM, with racing action set for 7:30 PM. Adult General Admission is $25, Children 6-11 are $10, and Children 5 and Under are Free of Charge. Pit Area pricing is $35 and a license is not required.