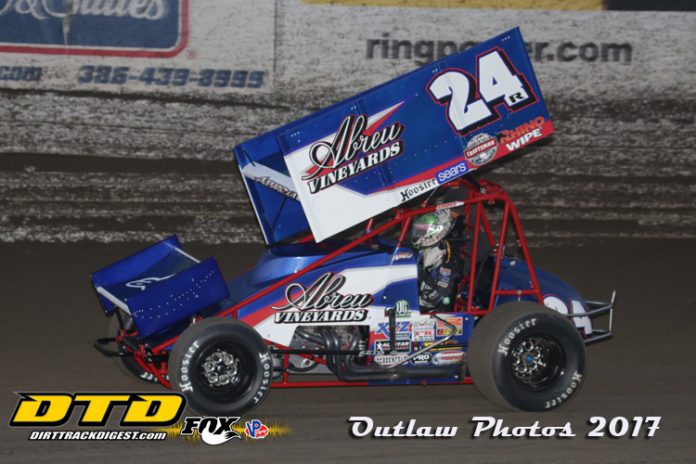 BECHTELSVILLE, PA – Two of the country’s most popular drivers head towards ‘The Hill’ in a special event of epic proportions.

When the NAPA Auto Parts Thunder on the Hill Racing Series heads to Grandview Speedway on Thursday, August 17, three-time NASCAR Cup Champion Tony Stewart and two-time Chili Bowl Nationals champion, Rico Abreu, will strap into a 410 sprint car and compete with the Arctic Cat All Star Circuit of Champions.

Brought to you by Levan Machine & Truck Equipment, you’ll find “Smoke on the Hill” and Rico Abreu when the green flag falls for the third Annual Thunder Cup — a 30 lap, $5,000 to win 410 sprint car special event.

“Grandview was one of the first events I added to my schedule this year,” Tony Stewart explained. “After attending the race last year as a spectator and owner of the All Stars, I knew I had to participate in the race this year. As a sprint car fan, it is one of the most exciting tracks to watch a sprint car race. I cannot wait to get my [No.] 14 car unloaded on the Hill. The competition will be nothing short of spectacular. I hope we can have a good night and put ourselves in a position to compete for the win.”

Abreu, one of the most exciting and most popular Sprint Car drivers in the country is anxious to get to the Berks County dirt track.

“I’m really excited to get to Grandview, I’ve heard a lot of great things about the track,” Abreu stated. “I’ve got a lot of fans in Pennsylvania and I don’t get to race that far east too much, but definitely look forward to that night with the All Stars and all the tough Pennsylvania cars. It’s always fun going to new tracks especially in an area known for some of the best sprint car drivers in the country.”

Stewart and Abreu join more than 15 full-time Arctic Cat All Stars competitors, but while the All Stars bring an elite group of drivers, a battalion of Central Pennsylvania’s top stars are prepared to defend their home turf – and when the greatest Sprint Car drivers in the world do battle it is sure to be unpredictable, especially “on the hill”.

Additional news and updates about this event will be available on all of the NAPA Auto Parts Thunder on the Hill Racing Series social media channels.

About Thunder on the Hill Racing Series
The brainchild of Grandview Speedway owner Bruce Rogers, special events promoter Bob Miller and local driving star Dave Kelly, the Thunder on the Hill Racing Series celebrates 28 years of the most anticipated events of the racing calendar year after year. In 124 events over $4.2 million dollars has been divvied up among the area’s fastest racers. What started as a single 410 Sprint Car event in 1990 has blossomed to feature a variety of racing action including 358 Modifieds, USAC Wingless Sprints, All-Star Circuit of Champions, 360 & 410 Sprint Cars, Sportsman, Late Models, Midgets, Legend Cars, DIRTcar and ROC Modified events.

About the Arctic Cat All Star Circuit of Champions
All Star Enterprises, LLC, owned by Tony Stewart, d/b/a the All Star Circuit of Champions, is a winged sprint car series. The All-Star Circuit of Champions Sprint Car Series is one of the oldest traveling 410 sprint car organizations and is a staple of grassroots, open-wheel racing. Formed in 1970 by Bud Miller, the series has largely been considered the first ‘outlaw’ Sprint Car organization of the modern era. After a 10 year stint as owner of the All Stars, Miller passed control of the series to Bert Emick in 1980; a reign that would continue through 2002. Guy Webb then purchased the series from Emick in the summer of 2002 and served as the series President for the next 12 years. Motorsports entrepreneur Tony Stewart agreed to terms with Guy Webb to become the sole owner of the original winged sprint car tour in January of 2015.