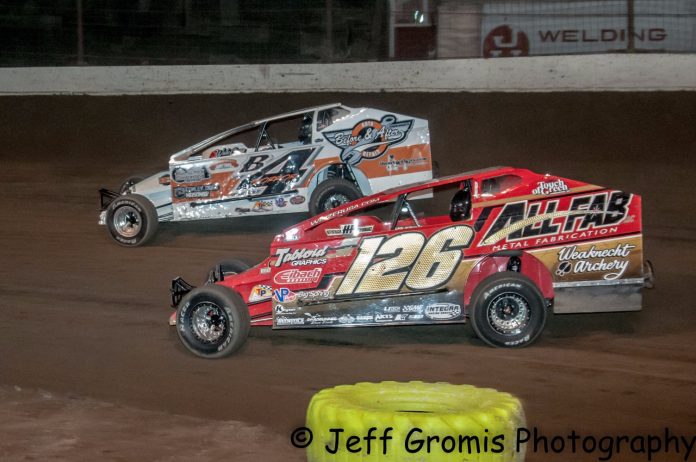 BECHTELSVILLE, PA.  – Craig Whitmoyer has been struggling with engine issues and other mechanical problems this season in the NASCAR Sportsman ranks at Grandview Speedway, but Saturday night the Hamburg leadfoot had his self-owned No. 99 in top notch condition for the Summer Splash 40-lap feature when he scored his season first win for a payday in excess of $1,500. Whitmoyer had to hold off numerous challenges from runner-up Joe Funk III, who posted his season best run and also deal with heavy lapped traffic.

The T.P. Trailers 30-lap NASCAR 358 Modified feature was quite a battle between Mike Kellner and eventual winner Jeff Strunk. The pair battled through restarts and lap traffic before Strunk took advantage when Kellner went too high off the third turn and Strunk dove the Keystone Racing No. 126 underneath him with two laps to take the lead. It was Strunk’s first win of the year at the 1/3-mile, banked clay oval and his 66th Saturday night career win. Through all the side-by-side racing Strunk and Kellner never made contact proving it can be done.

Ron Kline posted back-to-back victories in the BRC NASCAR 25-lap Late Model feature for his third triumph of the season chased across the line by Chuck Schutz in the car normally driven by Andy Cassel since he had problems in his car in the timed hot laps.

There have now been 15 different feature winners this season with no repeat winners in the Modified division after six Saturday night programs.

Paul Houseknecht took the early lead in the Sportsman feature and held that spot until the ninth lap restart needed when Andrew Kreis spun in the third turn with Kurt Bettler also involved since he had nowhere to go. On the restart Brad Arnold motored to the front of the pack. That was short-lived however as a flat tire brought Arnold to an abrupt halt along the homestretch one lap later. This incident put Whitmoyer at the head of the pack when action went green again. Pressuring Whitmoyer were Funk III, Mark Kemmerer, Houseknecht and Brad Grim.

A flat tire slowed Ryan Lilick’s pace in turn two for the 12th lap yellow. After a quick pit stop he rejoined the race. Whitmoyer held his high line on the restart while Funk III ran the bottom groove in an attempt to take the lead away.

Funk III began to close in on Whitmoyer, who had a slight edge over the pack, with Kemmerer, Brian Hirthler and Ryan Lilick, coming on strong after his pit stop.

Whitmoyer and Funk III ran door-handle to door-handle for several laps without incident and dealt with heavy traffic.

Jeromy Guistwite spun in the fourth turn for the last caution on the 35th lap which meant a single file restart. Lined up behind Whitmoyer were Funk III, Hirthler, Lilick and Louden Reimert.

Whitmoyer never faltered and held off all competitors to pull into the winner’s circle for the first time since the opener April 2016. It was his seventh career win. Finishing second was Funk III trailed by Hirthler, Lilick and Reimert.

Heats were won by Kemmerer, Paul Houseknecht and Guistwite. Mike Mammana was the consi winner.

Modified feature action saw Kellner charge to the front of the 29-car starting grid to set the pace with pressure from several competitors.

Mike Mahaney slowed along the backstretch with a flat tire for the fifth lap caution. The restart had Kellner still the leader, but now the son-father team of Steve and Ray Swinehart, Strunk and Grim lined up behind him.

Strunk overtook second on the sixth lap caution brought out by a multi-car third turn tangle to put his bids in for the lead.

Kellner ran a high line while Strunk tried to dive underneath him several times, but to no avail as Kellner out pulled him when they were side-by-side. R. Swinehart made it a three-way battle for first at one occasion, but that didn’t last long.

With four laps to go S. Swinehart, running sixth, stopped along the backstretch as his bad luck continued.

Kellner kept Strunk at bay on the restart, but Strunk didn’t give up.

Coming out of turn three with two laps to go, Kellner was up high in the marbles and Strunk emerged as the new leader.

For the second week in a row the feature ended under checkered/caution but that didn’t change the outcome and Strunk was the victor this time. What triggered the checkered/caution was Frank Cozze dove underneath Kellner, hit the yuke tire and spun. Cozze lost his third spot and a few others were collected in the accident. Kellner hung on for second followed by R. Swinehart, Craig Von Dohren and Duane Howard, who put on quite a battle in the later stages for third through fifth.

Kline took over second on the 15th lap and set his sights on Ogin. Behind them Schutz, Todorow and Merkel jockeyed for the remaining spots.

Lou Egrie Sr. spun in the fourth turn to bring out the final caution on lap 21. At the same time Merkel, in the thick of the battle dropped out of contention. Ogin was still the leader when action resumed, but Kline made his presence known.

Kline became the new leader with three laps remaining and never looked back to chalk up his 39th career win. Schutz was able to grab second followed by Ogin, Wayne Pfeil and Bryon Sipe.

NASCAR stock car racing action returns to Grandview Speedway on Saturday, June 10th with the running of Whelen Engineering Night featuring the TP Trailers NASCAR 358 Modifieds, Sportsman and BRC Late Models. Spectator gates open at 5:30 p.m. with racing at 7:30 p.m. Adult admission is $15 while youngsters 11 and under are admitted FREE. Free parking is available on the speedway grounds.