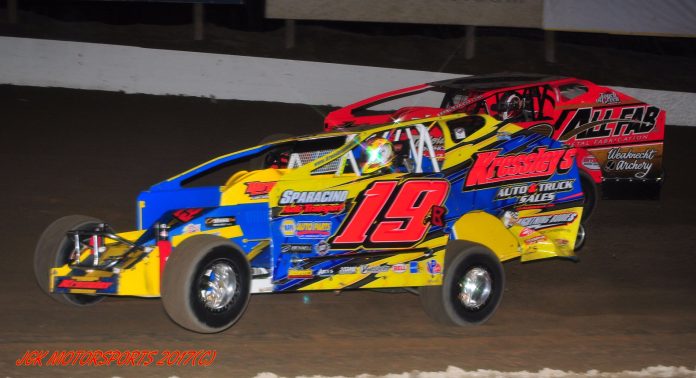 BECHTELSVILLE, PA. – Ma Nature was defeated at Grandview Speedway on Saturday as afternoon showers looked as if they would force another show to be cancelled. However management held off and the track crew did a great job to make racing possible.

Brett “The Threat” Kressley, the 2016 Grandview Modified rookie, struggled early in the season with numerous mechanical and engine issues. Making a rare Grandview appearance on Saturday night, the Orefield leadfoot took the lead on the fourth lap of the TP Trailers 358 NASCAR Modified 30-lap feature on Saturday night at the 1/3-mile oval. He then went on to capture his first win of the year to be the eighth different winner in the class. Runner-up Duane Howard was closing fast in the later stages, but ran out of time. Brett gave a shout out to his dad Brian as the victory was an early Father’s Day present.

The BRC NASCAR Late Model 20-lap feature saw Ron Kline lead from green to checkered and win his fourth feature behind the wheel of the Wanda Brown-owned No. 3.

Mike Lisowski, who has been having his share of bad luck, finally had things go his way for a change. The Minersville speedster pulled into the winner’s circle to chalk up his first triumph of the season in the 25-lap NASCAR Sportsman feature.

All events were televised by RCN-TV and every feature winner received monetary awards from T.P. Trailers and product awards from V.P. Race Fuels providing they met the proper requirements.

Bobby Gunther-Walsh led three laps of the Modified feature before Kressley made a bold outside move going into the third turn and emerged as the new leader when the pair came out of the fourth turn.

While Kressley began to pull away from the pack, Gunther-Walsh, Kenny Gilmore, Ryan Grim and Mike Gular diced for second through fifth.

Gilmore overtook second on the eighth lap and set said after Kressley to try to reel him in.

The pack regrouped on the tenth lap when last week’s feature winner Frank Cozze was spun in the second turn by Kyle Borror who was placed to the rear for the incident. Kressley held his own on the restart, but now Gular was the one pressuring him for first while Howard, Gilmore and Jeff Strunk were right behind waiting for a false move.

The front runners led by Kressley encountered lap traffic at the conclusion of 20 laps and had to use heads-up driving tactics.

After the tenth lap caution period, no more restart were needed and even though the pack closed in on Kressley through the slower traffic he never faltered and was able to record his second career with a rapidly closing Howard followed by Gular, Gilmore, for his season best finish and Strunk. Strunk’s fifth-place finish put him at the head of the point leader board since Craig Von Dohren, the point leader going into the show finished back in ninth.

Gunther-Walsh, Joe Fanelli and Kressley won the heats. The consi went to Borror.

Polesitter Kline ran off and hid at the start of the Late Model feature while Wayne Pfeil, Danny Snyder, Kyle Merkel and Steve Todorow diced for positions.

Todorow’s night ended when he slowed along the homestretch for the seventh lap caution putting him out of contention. It was still Kline in front when action resumed.

Snyder, who made his return for his first start of the season after missing several years, brought out the yellow on the ninth lap. Pfeil made a run on Kline on the restart, but within no time Kline was long gone being chased down by Merkel, Brian Shuey and Chuck Schutz.

More restarts were needed, but that didn’t deter Kline as he parked it in victory lane for his 40th career win. Finishing second was Pfeil followed by Merkel, Shuey and Schutz.

The late models will be out of action until Saturday, July 1 when they will compete in the Firecracker 40-lap Late Model feature.

Sportsman feature action had Steve Young set the pace for six laps until Lisowski got by him for the top spot on the seventh circuit.

With Lisowski now in command jockeying for positions behind him were Young, Craig Whitmoyer, Paul Houseknecht and Brian Hirthler, the current point leader.

Whitmoyer finally got by Young on the 13th lap to take chase after Lisowski who opened up a huge advantage over his fellow competitors.

The red was thrown with five laps to go setting up a single file restart when Mike Mammana hit the third turn wall with heavy impact. He was uninjured, but the car sustained considerable damage. Lisowski managed to hold the lead while Whitmoyer, Hirthler, Ryan Lilick and Houseknecht tried to change the status.

Lisowski’s and his crews continuous long hours prepping the car paid off as he was able to score his eighth career win chased across the line by Whitmoyer, Hirthler, R. Lilick and Houseknecht, for his best finish ever.

Next on the schedule at Grandview is the first appearance of the new Mid-Atlantic Sprint Series. The 305 Sprint group will be part of the June 24th Bechtelsville Car Wash Night featuring the Sprints, TP Trailers 358 Modifieds and Sportsman. Heading up the expected strong contingent of Sprints will be Doylestown’s Tim Tanner who is coming off a big win at Delaware Int’l Speedway. And fans will be looking to see who will be the next racer to join the long list of feature winners so far this season. Adult admission for the special night will be $18. Racing starts at 7:30 p.m. And Bechtelsville Car Wash will also sponsor a Modified Cash Dash.