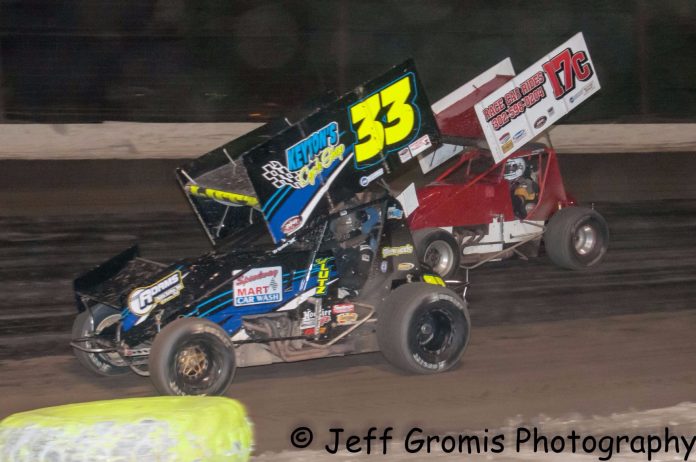 BECHTELSVILLE, PA – It was a down to the checkered flag battle for the top spot with Scott Lutz getting the edge over Tommy Carberry, Jr. on the final lap as Carberry bounced off the wall bringing out the caution flag. Lutz was able to earn the victory in the 25-lap Mid-Atlantic Sprint Series feature race at Grandview Speedway Saturday night. The race, starting 24 Sprint cars, marked the first appearance for the MASS Sprinters at the Bechtelsville oval. Unfortunately rain forced postponement of the TP Trailers 358 Modifieds and Sportsman feature races that were scheduled to be part of Bechtelsville Car Wash Night.

Steve Swinehart won the first Modified qualifier with Jared Umbenhauer and Duane Howard each getting a win. The consolation went to Kevin Hirthler.

Duane Howard was able to take the win in a special Modified Cash Dash sponsored by Bechtelsville Car Wash.

The BRC Late Models will be in the spotlight on Saturday, July 1st as they race in the annual Firecracker 40, the most prestigious event of the season for the Late Models. There will be extra cash for the winner along with the TP Trailers and Truck Equipment bonus. Fans will get to see two NASCAR 358 Modified features with the rained out feature from Saturday June 24th added to the big night that already included a NASCAR Modified feature. In addition the Sportsman stock cars will be racing. Spectator gates open at 5:30 p.m. with racing scheduled for 7:30 p.m. Adult admission is $20 while youngsters 6 thru 11 pay $5 and children under 6 are admitted free.

Saturday, July 8, 7:30 p.m. TP Trailers 358 Modifieds, BRC Late Models, Sportsman and Blast from the Past Vintage Racers plus Sportsman feature rained out on June 24. Modified racer Kory Fleming and his Sleepy Hollow race team will be giving away bicycles, two to girls and two to boys.

Sunday, July 16, 1 p.m. Outlaw Enduro racing along with Blast From the Past Vintage racers.