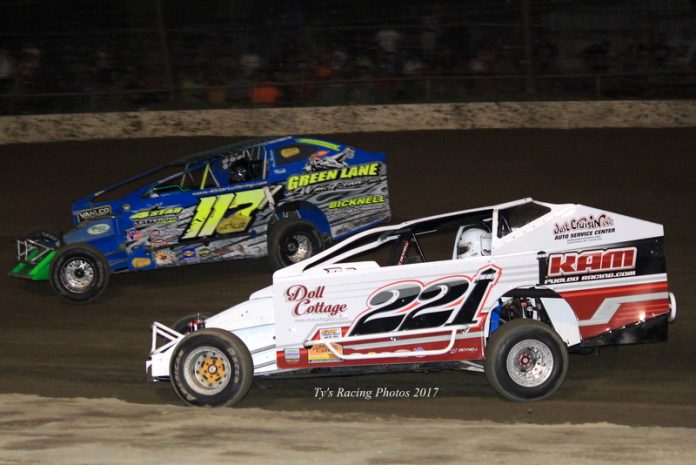 BECHTELSVILLE, PA – The popular BRC Late Model stock cars will be the featured attraction at Grandview Speedway on Saturday night as they take part in the annual Firecracker 40 offering $2000 plus a couple of perks from TP Trailers and Truck Equipment along with VP Racing Fuels to the winner. In addition to the Late Models fans will get to enjoy two (2) 25-lap NASCAR Sportsman feature races and a TP Trailers 358 Modified feature race. A full series of qualifying events will be included in the big night of racing which has a 7:30 p.m. starting time. And fans will get a taste of yesteryear with the Blast from the Past Vintage racers. Modified racer Kory Fleming will be having his annual bicycle giveaway with two for girls and two for guys.

Sportsman action, two 25-lap feature races, has point leader Brian Hirthler holding a 179 point edge in the chase for the title. He will be looking to have a couple of solid finishes or even a win to hold on to this top spot. Competition will come from two feature winner Ryan Lilick, popular rookie Louden Reimert and a bevy of other great talents.

And in the primary division of racing, the TP Trailers NASCAR 358 Modifieds will have current point leader Jeff Strunk taking a 14 point edge over defending champion Craig VonDohren into the Saturday night action. Others in the top five in the standings include Duane Howard, Mike Gular and Doug Manmiller. Strunk is the only driver in the top five to have won a feature.

Speaking of features there have been 20 feature winners out of 24 features run this season. Unfortunately wet weather has put quite a dent in the schedule. Fans will be anxiously looking to see what new names will be added to the impressive feature win list.


Adult admission for this excitement packed night of stock car racing is $20, $5 for youngsters 6 thru 11 and under 6 are admitted free. Free parking is available on the speedway grounds. Pit admission is $30 and a NASCAR license is required.

Grandview Speedway, a one-third-mile, banked clay track, is in its 55th season of racing, is located on Passmore Road in Bechtelsville, PA just a short distance off Route 100, 10 miles north of Pottstown. For information telephone 610.754.7688 or check in at www.grandviewspeedway or Facebook.