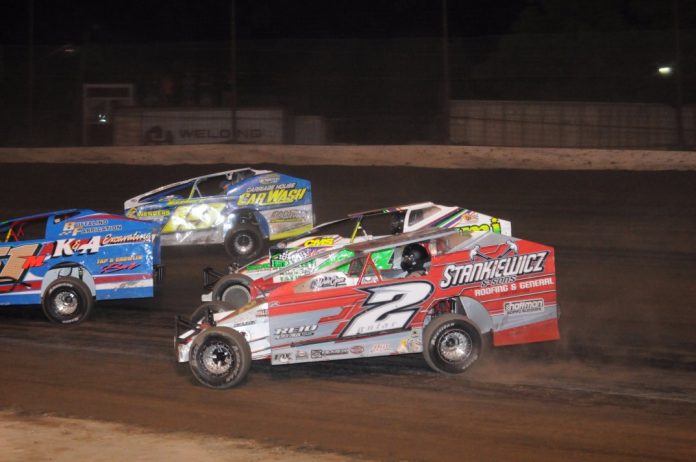 BECHTELSVILLE, PA. – Fans that attended the racing action on Saturday night at Grandview Speedway certainly got their money’s worth. All feature events had side-by-side, three to four wide action throughout their respective shows that produced two repeat winners, two season first winners that included a first career win.

The highlight of the night was the Firecracker 40-lap BRC NASCAR Late Model feature that was won by defending point champion and current point leader Chuck Schutz for a payday worth in excess $2,000. Schutz, who last won the event in 2010, dedicated the win to long-time supporter Carl Knauer who passed away. It was a long race commented Schutz in victory lane and he’s glad he could conserve his tires and that they held up in the battles with runner-up Ron Kline, who last won the race in 2011.

The 30-lap T.P. Trailers 358 NASCAR Modified feature wasn’t decided until the drop of the checkered. Brett Kressley appeared to be on his way to another win, but coming in for the checkered he had to go high to get around lapped traffic. It was all Mike Gular, who has been knocking on the door of victory lane for several weeks, needed. Gular took advantage of the situation and dove underneath Kressley and it was a drag race to the finish line, but Gular parked the Rich Stankewicz-owned No. 2 in victory lane for the first time this year ending a six-year winless drought.

In the 25-lap NASCAR Sportsman make-up feature rained out June 24, Craig Whitmoyer overtook the lead from Ryan Higgs on the 12th lap and was able to hold off the late race challenges of second-place finisher Brad Grim to chalk up his second win of the season.

Brad Grim finished one spot higher in the second Sportsman feature. He overtook Jack Butler on the 16th lap and proceeded to put the Mike Stringer-owned No. 23 in the winner’s circle for his first career win at the 1/3-mile banked clay oval.


All the regular feature event winners received monetary awards from T.P. Trailers and Truck Equipment and product certificates from VP Fuels providing they met all the mandatory requirements.

There have now been 22 different feature winners this season at Grandview in the NASCAR sanctioned divisions of racing.

Brett Peters won the Modified portion of the Blast From The Past 15-lap feature while Andy Cassel copped the Vintage Car section since all divisions were combined for their feature.

Brian Shuey led five laps of the Late Model feature before Kyle Merkel charged to the front of the pack on the sixth lap restart needed when Drew Weiss spun along the homestretch.

Within a few laps behind Merkel dueling for second were Schutz and Kline trailed by Bryon Sipe and Danny Snyder, winner of the event in 2012 and 2013.

Earlier leader Shuey, who was gradually falling off the pace, brought out the yellow on the 14th lap when he stopped in turn four with a right rear flat.

Merkel maintained his position when action resumed, but now Kline was second challenging for first.

After a while Merkel had a slight edge built up due to the fact that Kline and Schutz had their own battle going.

Schutz put the Ty Zeigler-owned/PPB No. ONE in second and set off after Merkel.

The lead changed on the 27h lap as Merkel hopped the fourth turn cushion and almost hit the boilerplate. By the time he corrected the mishap Schutz was past him and quickly out-distanced himself and was running away from his fellow competitors.

Numerous restarts were needed, but that didn’t deter Schutz and he went on to score another Firecracker 40 win and his second win of the season. Chasing him across were Kline, Snyder, Merkel and Sipe.

Mike Kellner grabbed the early lead in the Modified feature and set the pace for eight laps before he spun in the fourth turn. Kressley jumped the cushion, hit the wall, but was able to avoid the spun car of Kellner to become the new leader. John Willman, who was third at the time, wasn’t as fortunate and got involved in the mishap putting him out of contention along with Kellner. On the restart Kressley held on to the lead with Kyle Borror, Addison Meitzler, Kenny Gilmore and Ryan Grim in pursuit.

Gilmore, who battled with Borror for second several laps, finally broke free on the 14th lap and took chase Kressley who encountered lap traffic and had to thread his way through.

Coming through to the front of the pack from his 12th starting grid was Gular. He advanced to third with ten to go and was on the move.

Kressley was still ahead with three laps to go, but now Gular was second and charging with a full head of steam and lap traffic was in the picture.

Coming in for the checkered Kressley had to go up on the track to get around the cars, as did the others. Gular dove down low for the drag race finish and Gular emerged a well-deserved crowd-pleasing winner. Kressley crossed the line second, however after tech was placed last due to a fuel issue. Second was awarded to Gilmore, for his best finish of the season followed by Duane Howard, coming off a Tuesday night win; Frank Cozze and Kyle Borror.

Kellner, Meitzler and Kressley won the heats. The consi was won by Ray Swinehart.

In the make-up 25-lap Sportsman feature, left from a previous rained out event, Derrick Smith set the pace for one lap before Ryan Shupp took over.

Shupp’s lead was short-lived as Ryan Higgs got by him on the third lap restart brought out by a ten-car fourth turn melee. Whitmoyer followed through as the same time to challenge.

The lead changed on lap 12 when Whitmoyer motored into first and Grim overtook second to begin the battle.

Whitmoyer stuck to the high line and Grim ran the bottom in their side-by-side battle.

Whitmoyer thought he was running out of gas because he felt he was losing power, but he still hung on for the win followed by Grim, current point leader Brian Hirthler, Jim Housworth and Butler.

Once the rained out feature was completed, qualifying events were held. Brad Arnold, Paul Houseknecht and Ryan Lilick won the heats. The consi winner was Louden Reimert.

In the second Sportsman feature polesitter Shupp grabbed the early lead and held that spot for 11 laps before Butler took control. No sooner did butler pass Shupp going into the first turn, Joe Funk III, in third, made contact with Shupp and Shupp spun. Funk III was sent to the back of the pack for the mishap.

Lined up behind Butler on the restart were Grim, Kyle Lilick, Mike Lisowski and Mark Kemmerer.

The lead changed on the 16th lap when Grim succeeded to get past Butler and immediately began opening some daylight.

Grim, who felt the car ran better on the dryer track, never looked back and went on to chalk up a well-earned win. Second went to Butler for his best run, followed by Lisowski, Housworth and Ryan Beltz.

The Blast From The Past feature saw Todd Lapp lead the first lap and Mike Kelly lead the second through fifth until the caution came out for a first turn spin. On the restart Brett Peters took over first and never surrendered the position to take the checkered in the event in the Modified class. Doug Stepanchule was second with Andy Cassel third in the Vintage division trailed by Mike Garris Sr. and Todd Lapp.

Two TP Trailers NASCAR 358 Modified features along with Sportsman and BRC Late Model racing will be the attraction on Saturday, July 15th at 7:30 p.m. The night of action packed NASCAR stock car racing will be sponsored by A.D. Moyer Lumber Co.

Then on Sunday at 1 p.m. the Blast from the Past Vintage Racers will be in action along with the Outlaw Enduro racers. Enduros will feature 100-laps for Big Cars, 100-laps for Small Cars along with Junkyard Cars for 50-laps and a Ladies race.

Sunday, July 16, 1 p.m. Outlaw Enduro racing along with Blast From the Past Vintage racers. 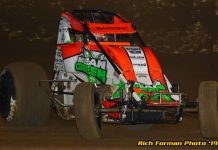