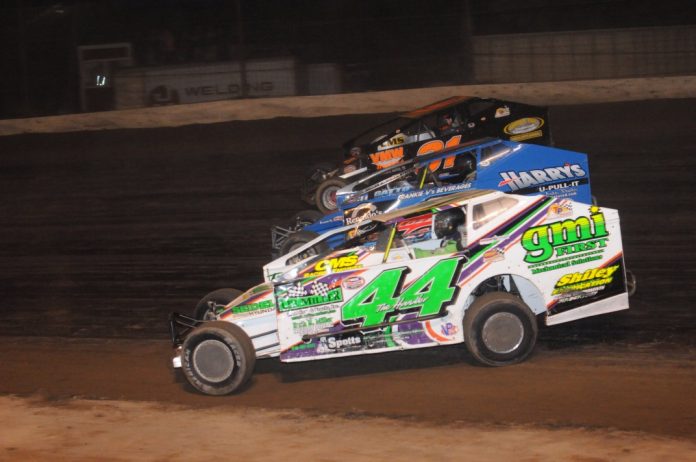 Umbenhauer, shut out of the winner’s circle since his rookie win September 5, 2015, has been close on various occasions to claim a victory; but was always hampered with some kind of problem. Things turned around for the Richland Rocket when he overtook Kenny Gilmore on the 24th lap of the T.P. Trailers 358 NASCAR Modified 30-lap feature that was postponed by rain on June 24 to claim his first win of the season to become the tenth different winner.

Manmiller became the first repeat Modified feature winner in the A.D. Moyer sponsored portion of the show after a hard-fought battle with Brett Kressley and Mike Gular that went down to the wire.

The BRC NASCAR Late Model 20-lap feature wasn’t decided until the wave of the checkered. Bryon Sipe led from the start until the 18th lap when Chuck Schutz got by him, Sipe regained it the next lap, but in a drag-out down-to-the line dual off the final corner, it was Schutz chalking up his third win of the season. Sipe displayed sportsmanship by congratulating Schutz.

In NASCAR Sportsman action the 25-lap feature was up for grabs between Swinehart, Brad Arnold and Joe Funk III. Swinehart, who was sidelined the previous week due to engine problems, was back in top form and prevailed the victor for his second triumph of the current campaign.

On the restart of the rained-out Modified feature Gilmore grabbed the early lead trailed by Steve Swinehart, Kyle Weiss, John Willman and Duane Howard, before Howard dropped out with mechanical problems.

Weiss took over second on lap six to put his bids in for the lead.

A second turn spin by Kyle Borror brought out the 12th lap caution. The restart was void after Clay Butler and Mark Kratz tangled in turns one and two. Gilmore maintained the pace, but now Umbenhauer was second trying to outmaneuver Gilmore.

Gilmore stuck to the inside trek while Umbenhauer ran the high line as the laps wound down.

The lead changed for the final time on the 24th lap when Umbenhauer switched lanes as he experienced trouble with the right front when he ran the outside and made the move stick.

Umbenhauer never surrendered first to capture the win. Chasing him across was Gilmore, who never gave Umbenhauer a chance to slip-up; Manmiller, Weiss and Jeff Strunk.

Once that portion was completed qualifying events were run with Howard, Harris and Gilmore winning the events. The consi went to Brian Krummel.

Brian Houseknecht was the early leader in the second feature that was red-flagged when Kevin Hirthler somehow was on top of the third turn boilerplate. He injured his elbow and the car was done for the night. Houseknecht was still first when action resumed while Esposito, Brett Kressley, John Willman and Frank Cozze tussled for positions.

The yellow was out on lap nine after Willman and Howard made contact off turn four and until things cleared Colt Harris hit the second turn wall and was out of contention. Behind Houseknecht on this restart was Kressley and he was trying feverishly to pass him.

While running third and fourth in the thick of the battle, Cozze and Gular made contact and Cozze spun in the third turn for the 13th lap caution. This restart saw the front three get together and kept going, but veteran campaigner “The Handler” Manmiller took advantage of this incident to put the Jason Miller-owned No. 44M at the front of the pack.

Manmiller ran the bottom while Kressley gained ground on the outside to pressure him.

Behind Manmiller and Kressley, the battle brewed between Gular, Howard and Strunk.

Manmiller never looked back and was in victory lane for his 26th career win followed by Kressley, Gular, Howard and Strunk.

Sipe on the outside and Snyder down low were side-by-side for the lead and numerous times Snyder pulled even with Sipe, but each time Sipe emerged the leader.

Snyder’s bad luck continued when he slowed with a right flat rear tire for the final yellow on the 15th lap. Sipe was able to keep Schutz behind when action went green again, but he had his work cut out.

Schutz passed Sipe with two to go, but Sipe was back in front the next lap.

Coming off the final turn and the checkered in sight, Schutz gave it one last try and was successful in his efforts as he picked up the win with Sipe a very close second followed by Emery, Todorow and Pfeil.

The Sportsman feature was Joe Funk III taking the early lead at the onset.

John McGovern, while running second, spun between the third and fourth turn for the second lap yellow. On the restart Swinehart charged to the outside to become the new leader with Funk III giving him no margin to error.

It didn’t take long for a three-way battle to develop between Swinehart, Funk III and Brad Arnold. Right behind were Mike Lisowski and Craig Whitmoyer waiting for an opportunity for advancement’

Ryan and Kyle Lilick spun in turn four on the 13th lap. Jim Housworth was sent to the rear for starting the mishap along with the involved Lilick’s. The single-file restart was brought back to the line after Kyle Lilick spun Housworth. As a result of his actions, Lilick was sent pit side out of competition. Swinehart was still number one on the restart while Funk III and Arnold dueled for second.

Arnold took over the runner-up spot on the 21st lap and if he intended to pass Swinehart, he was going to have to take the long way around because Swinehart switched to the inside.

Swinehart hung on for his third career win which he thanked his skeleton crew since some were missing and also Bob Sheidy for his long hours in the machine shop. Capturing his season best finish was Arnold followed by Funk III, Lisowski and Ryan Beltz.

Swinehart, McGovern and Arnold won the heats. The consi was won by Ryan Lilick.

On the schedule for next Saturday, July 22nd, is Hatfield Quality Meats night featuring the NASCAR TP Trailers 358 Modifieds, BRC Late Models and Sportsman along with the Blast from the Past Vintage Racers. Spectator gates open at 5:30 p.m. with racing getting the green at 7:30 p.m.

COMING EVENTS: Sunday, July 16, 1 p.m. Outlaw Enduro racing along with Blast From the Past Vintage racers. 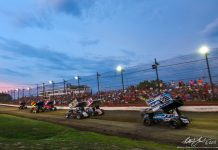