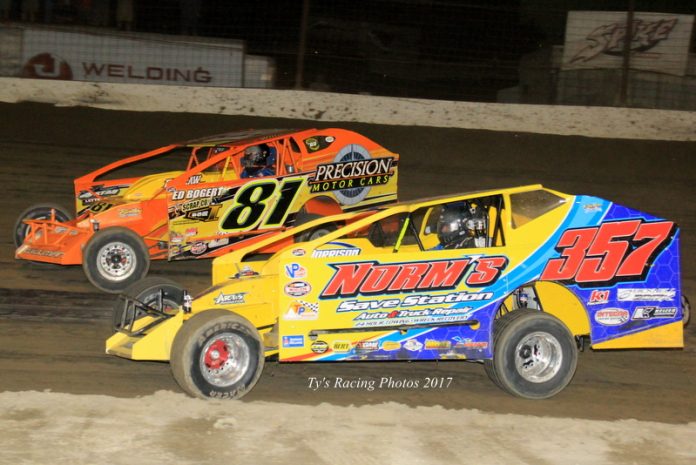 BECHTELSVILLE, PA – Nine time track Modified champion Craig VonDohren and multi-time champion Duane Howard are still without a feature win and it is past midseason at Grandview Speedway. If someone had forecast that at the beginning of the season very few would have taken them serious.

When racing continues this Saturday VonDohren and Howard will be looking to change their luck. Perhaps one of them will. But then again it could be point leader Jeff Strunk, Doug Manmiller, Rudy Gular, Brett Kressley or one of the other top talents seen in action each Saturday night on the one-third-mile, banked clay oval.

All of the Modified racers will be using this Saturday and the following Saturday as tune-ups for the $10,000 to win Pioneer Pole Buildings Forrest Rogers Memorial, a 50-lapper, set for Saturday, August 5th. This is one of the most prestigious and most sought after wins in the sport. The race is run annually in memory of the late founder of speedway.

Hatfield Quality Meats Night will feature the TP Trailers 358 Modifieds, BRC Late Models and Sportsman along with the added attraction of Blast from the Past Vintage racers.

One of the most popular attractions on long time sponsor Hatfield’s Night will be their mascot Smylie who will be shooting t-shirts and hot dogs into the stands.


On Saturday the spectator gates will be open 5:30 p.m. and racing will start at 7:30 p.m. Adult admission is $15 while youngsters 11 and under are admitted FREE. Pit admission is $30 for those having a NASCAR license.

A tripleheader show of Modifieds, Late Models and Sportsman will be the attraction on July 29th.

Additional information can be had at www.grandviewspeedway.com and Facebook or telephone 610.754.7688.