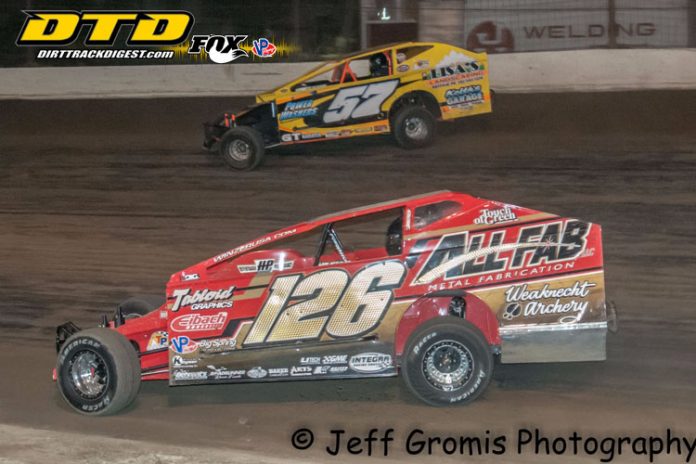 BECHTELSVILLE, PA – The battle for the championships, three of them, at Grandview Speedway is getting tougher and tougher as racers try to each the prestigious and lucrative track and NASCAR titles.

Going into the Saturday (July 29th) tripleheader show ten time champion Jeff Strunk sits on top of the standings in the TP Trailers NASCAR 358 Modified division by just a narrow margin over defending champion Craig VonDohren. Also in the battle for the top prize is Duane Howard along with Mike Gular, Jared Umbenhauer, Doug Manmiller and a few others. Keep in mind that both VonDohren and Howard have yet to win a feature this season.

In the BRC Late Models defending champion Chuck Schutz is in the top spot and in the Sportsman Brian Hirthler is in front as he has been for much of the season.

Six nights of NASCAR racing have been rained out this season tightening up the point battles even more.


This Saturday the three division show will get started at 7:30 p.m. with spectator gates open at 5:30 p.m. Adult admission is $15 while youngsters 11 and under are admitted free. Active military with proper ID are admitted FREE.

At 5 p.m. in the main gate entrance area the weekly Low Down and Dirty Meet & Greet takes place and this Saturday will feature Modified ace Brian Krummel and Sportsman standout Kurt Bettler.

The man who created Grandview Speedway more than a half century ago will be remembered Saturday, August 5 when the annual Pioneer Pole Buildings Forrest Rogers Memorial is presented. The 50-lap classic featuring the TP Trailers NASCAR 358 Modifieds will reward the winner with at least $10,000 and just may attract some “visitors” looking to test their skills against the Saturday night regulars.

Craig VonDohren will be looking to win his third in a row but will come up against plenty of stiff competition as all the Modified teams could use the big bucks payoff.

Adult admission is $25 while youngsters 6 through 11 pay $5. Children under 6 are admitted free. The night of excitement will also include the BRC Late Models and Sportsman.