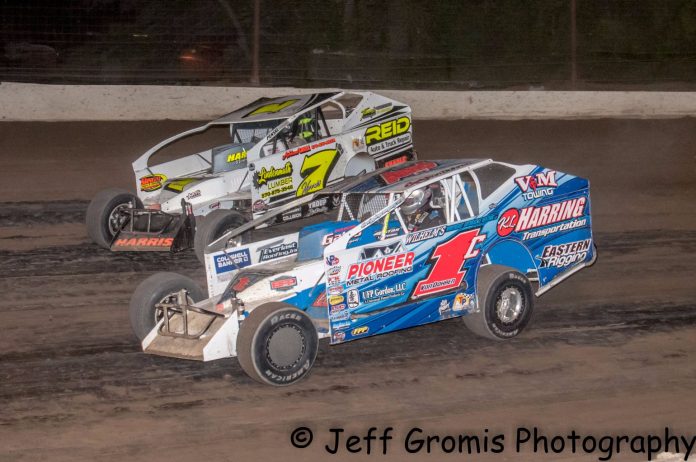 BECHTELSVILLE, PA – Craig VonDohren, the nine-time and defending Grandview Speedway Modified point champion, hadn’t been to victory lane at the 1/3-mile banked clay oval since August 20, 2016. Saturday night, VonDohren, who regained the point lead by 14 points over 10 time champion Jeff Strunk, passed Kenny Gilmore on the 13th lap restart of the TP Trailers 358 NASCAR Modified 30-lap feature and went on to park his self-owned, Keith Harring/V&M Towing sponsored No. 1C mount in the winner’s circle for his first triumph of the year and also became the 11th different winner.

Two weeks ago in the BRC NASCAR 20-lap Late Model feature Bryon Sipe was one lap shy of capturing his first win of the year. This time the Shoemakersville speedster made a bold move to pass leader Brian Shuey in lap traffic on the 14th lap and didn’t make any driver errors to score his season first win since May 28, 2016 to become the sixth different winner.

Brad Grim claimed his first career victory in the 25-lap NASCAR Sportsman feature on July 8, 2017 and two races later he put the Mike Stringer Collision No. 23 in victory lane for a second time.

Joe “Geezer” Fanelli set the pace of the Modified feature for seven laps before Kenny Gilmore, who recently became the new driver of the Dennis Bailey-owned No. 81 replacing John Willman, took over the top spot.


While Gilmore showed the way the battle behind him for the remaining positions was hot and heavy between Fanelli, Von Dohren, Duane Howard and Frank Cozze.

VonDohren, who started 12th and Cozze, eighth-place starter, advanced to second and third respectively on lap ten to pressure Gilmore.

A three-car, fourth turn tangle brought out the yellow on the 12th lap. It didn’t take Von Dohren long on the restart to shoot to the outside and overtake Gilmore for first.

Gilmore hung right there with Von Dohren for several laps trying to recapture the lead, but soon Von Dohren pulled away from his fellow competitors.

No more restarts were needed once Von Dohren gained control to allow anyone the chance to overtake him and when the checkered unfurled it was his 101st Saturday night career win. Finishing second was Gilmore trailed by Cozze, Howard and Tim Buckwalter, who posted his best finish of the year since returning a few weeks ago.

Before any laps could be completed in the Late Model feature something broke on the front end of Kyle Merkel’s car causing him to spin coming off turn two and out of competition. Once green flag action resumed Shuey was the early pacesetter with Sipe, Steve Todorow, Danny Snyder and Wayne Pfeil in pursuit.

Sipe, Todorow and Snyder had their own battle for second which allowed Shuey some breathing room.

Lapped traffic enabled the cars behind Shuey to close in on him and attempt to take the lead away.

On the 14th lap with a lapped car, Shuey and Sipe three-wide, Sipe shot past both of them and into the lead.

Sipe was determined not to make any mistakes and keep everyone behind him. He did just that and captured his second career win followed by Shuey, Snyder, Todorow and Chuck Schutz.

In the Sportsman feature polesitter Steve Young set the pace for two laps before Louden Reimert and Craig Whitmoyer tangled on the backstretch for the yellow. Whitmoyer could continue, but Reimert had to be towed back to the pits. On the restart Young, Derrick Smith and Joe Funk III went three-wide and Funk III emerged as the new leader.

Jim Housworth and Grim diced four the runner-up position several laps before Grim overtook him on the seventh lap to take chase after Funk III.

Andy Clemmer brought out the final yellow on the 13th lap when he slowed his pace with a flat tire in the fourth turn. When action resumed Grim took over first with Mark Kemmerer, Funk III, Housworth and Brian Hirthler, the current point leader, battling for the remaining positions.

Grim kept everyone behind him and continued until he became the eighth different winner trailed by Kemmerer, for his best finish, Funk III, Housworth and Whitmoyer, who was on the move after the early lap incident.

The heats were won by Kenny Bock, Mike Lisowski and Young while Caleb Ross won the consi.

Defending Sportsman point champion Jordan Henn, who was injured in the horrendous homestretch crash on April 29, was back in competition and garnered a seventh place finish.

Next Saturday Grandview presents one of its most prestigious events, the annual Pioneer Pole Buildings Forrest Rogers Memorial. This will be a 50-lapper for the TP Trailers NASCAR 358 Modifieds paying at least $10,000 to the winner. Also included in the night of excitement will be the BRC Late Models and Sportsman. Gates open at 5:30 p.m. with racing at7:30 p.m. Adult admission is $25 while youngsters 6 through 11 pay just $5. Children under 6 are admitted free.