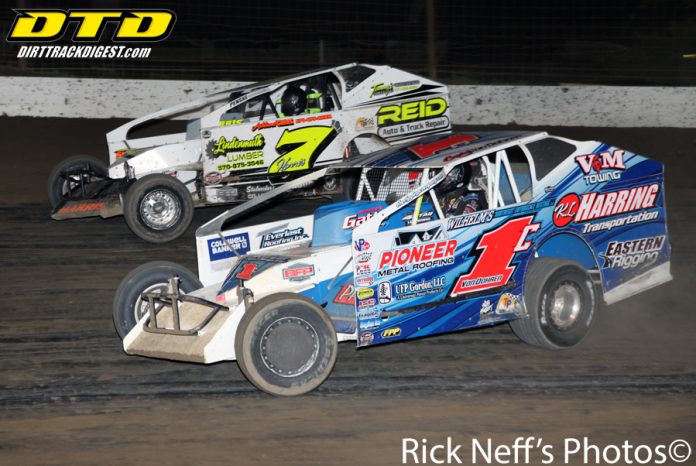 BECHTELSVILLE, PA – NASCAR 358 Modified point leader and defending champion Craig VonDohren scored a three-peat and became the only eight-time winner when he won the Forrest Rogers Memorial/Pioneer Pole Buildings 50-lap TP Trailers 358 NASCAR Modified feature for a $10,000 payday on Saturday night at Grandview Speedway in the races broadcast by RCN-TV, Allentown. The race is run in memory of the founder of the speedway.

During the course of the evening it was announced that the September 16th Freedom 76 Modified Classic, the biggest event of the season, would be run in memory of the late track promoter Bruce Rogers, who passed away in April, and will pay $30,000 to win. More details on this very special event will be released shortly.

VonDohren now joins Fred Rahmer, the ’82, ’83 and ’84 winner as the only driver at the 1/3-mile Berks Co. clay oval to win the prestigious event three straight times.

The defending and current point leader, who broke into the winner’s circle last week, didn’t have an easy time since he first had to battle side-by-side with Colt Harris several laps before he moved into first on the 31st lap and the he outran runner-up Mike Gular, who gave it his all several times, finishing second by a narrow 1.696 margin.

In victory lane VonDohren commented, “it was hard, flat-out racing and his crew worked diligently to repair the car after it got tore up in the heat race. The top was the place to be even though it was good on the bottom and I had to mix it up and run the middle while battling with Gular.”


The BRC NASCAR 20-lap Late Model feature was basically all current point leader Chuck Schutz as he ran away and hid since he led from the drop of the green until the wave of the checkered to win his fourth feature in the series.

John McGovern finally had a productive night in NASCAR Sportsman action as everything went in his favor. First he won his qualifying heat and then he held off the continuous challenges of runner-up Dylan Swinehart and third-place finisher Mike Lisowski once they caught him to win his first career ever 25-lap NASCAR Sportsman feature.

Modified action saw Bobby Gunther-Walsh lead for two laps before the yellow came out when Addison Meitzler lost a tire and stopped in the fourth turn. Harris powered the Pony Express No. C7 into first on the restart trailed by Brett Kressley, Gunther-Walsh, Steve Swinehart and John Willman.

Coming through the pack from his 16th starting berth was VonDohren behind the wheel of his own Pioneer Pole Buildings/V&M Towing No. 1C picking the competition off one-one-one and at the conclusion of 13 laps he was third.

Brett Gilmore stopped in the bottom of the fourth turn with a flat tire bringing out the caution with 14 laps complete. Harris maintained his position when racing resumed, but there were some tense moments when Brett Gilmore ran the red pit light and came charging out in front of the pack and was racing with them.

Another hairy moment occurred for Harris was when Dan Waisempacher slowed in the fourth turn directly in front of Harris, who did make contact since he had nowhere to go for the 21st lap caution. The incident didn’t deter Harris and he was still first on the restart, but now VonDohren was second putting his bids in for another win.

The red had to be thrown after Ryan Grim, debuting a brand new car, barrel-rolled three times after getting into the third turn infield tire while battling for positions. He was towed back to the pits and after a quick pit stop returned only to go back to the pits. Harris was determined to stay in front, but by this time VonDohren and Gular were second and third making it a three-way battle for first with Kressley and Kevin Hirthler in pursuit.

After Harris and Von Dohren ran door to door for several laps swapping paint on occasion, VonDohren emerged as the new leader on the 31st lap.

The final yellow was on the 37th lap for Kressley sitting in the infield. Earlier he slid into the homestretch infield on the 33rd lap and what many assumed was a mechanical issue. Later it was realized he needed medical attention because the driveshaft broke and hit him in the leg. He limped back to the pits without help trying to walk it off.

The leader continued to be VonDohren with Gular sticking right with him making several bids to overtake him, but to no avail, but Gular still showed determination.

VonDohren shuffled it up a bit deciding which line to run to deter Gular and it must have worked because at the conclusion he was in victory lane followed by Gular, Frank Cozze, Jared Umbenhauer and Duane Howard, who started 14th, 11th, 18th and 20th respectively.

The Late Model feature basically had Schutz steal the show as even though there were numerous cautions giving everyone ample opportunity to pass him they couldn’t get the job done and he went on to chalk up his 48th career win chased across the line by Wayne Pfeil, Bryon Sipe, last week’s feature winner; Lou Egrie Sr., returning after missing from action with motor issues and Steve Todorow.

On the seventh lap Dylan Swinehart, already a two-time feature winner this year and running fourth, went three-wide on the outside – made the move stick and was now second and took chase after McGovern.

It didn’t take long for Swinehart and Mike Lisowski, mow second and third, to reel McGovern in and make it a three-way battle for first.

Swinehart made several attempts to pass McGovern, but at the same time he had to be concerned that Lisowski wouldn’t get by the two of them.

McGovern kept the fierce competition behind him and went on to capture a well-deserved first win followed closely by Swinehart, Lisowski, Mark McGovern and Jordan Henn, the defending point champion who had a fine run in his second outing after returning from the homestretch accident earlier in the season.

Bock, McGovern and Young won the heats. The consi went to Brad Arnold.

WNPV will be giving away three pairs of tickets (value of $94) to Knoebel’s Amusement Park which will include Good for One All Day Handstamp with Wooden Coasters.

What was a huge success last year will happen again on August 12th.  Geiswite Creations will be holding their 4th Annual Back to School Giveaway.

As of right now the first 100 school age kids through the gate will receive a folder, notebook, and 2 pencils. There are also some drivers donating backpacks to be raffled off to the kids as well.

Last year was a huge success. Giving away over 125 folder sets, 122 backpacks and over $500 worth of school supplies.

If anyone would be interested in donating anything please call Geiswite Creations at 484-955-4914.

Additional information on racing at Grandview can be had at www.grandviewspeedway.com, Facebook and at 610.754.7688.