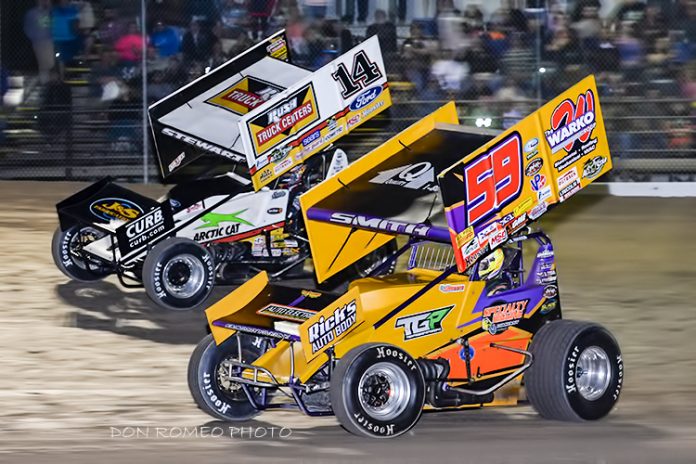 BECTHELSVILLE, PA – The old saying goes ‘there are plenty of fish in the sea’ – but for 29-year-old 410 Sprint Car ace, Ryan Smith, Grandview Speedway is the one that continues to get away.

“We got lucky, Ryan Smith had a better car than I did,” Speedweek event winner and NASCAR driver Kyle Larson explained in victory lane. Larson dominated the early part of Speedweek competition, but it was Smith who stole the lead – much to the delight of the jam-packed Grandview Speedway – before clipping the outside wall and violently flipping into turn 3.

“The Kunkletown Kid” comes back into Grandview Speedway stronger than ever. He currently sits second in the Arctic Cat All-Star Circuit of Champions series standings and is fresh off a victory at the All Stars event at New York’s Outlaw Speedway.


The best-of-the-best of competition will be on hand on Thursday, August 17 with drivers like Greg Hodnett, Danny Dietrich, Lucas Wolfe, Dale Blaney and Freddie Rahmer – all winners at area race tracks this season; along with All Star standouts Chad Kemenah, Tim Shaffer, Cole Duncan, and Carson Macedo all expected to be on hand; throw in one of the nation’s most popular drivers with Rutherford, CA’s Rico Abreu and action from three-time NASCAR Champion Tony Stewart – and you have one of the strongest fields of the All-Star season.

Grandview’s popular Sportsman division joins the card with a 25-Lap, $1,300-to-win event that will entice racers from all over the region. Some of the pre-entries include Brad Grim, Matt Stangle, Craig Whitmoyer, Mike Lisowski, Kenny Gilmore, Brian Hirthler, TJ Lilly, Brad Arnold and Ken Eckert Jr just to name a few.

Time Trials for the 410 Sprint Cars will open the show on Thursday, August 17 at 7:30 PM. The pit gates will open at 2:30 PM and the Grandstands will open at 5:00 PM. Fans can get up-close to the drivers and their mighty machines with the Low Down and Dirty Meet and Greet kicking off at 5:00 PM.

General Admission Adult tickets are $30, Children ages 6-11 are $10, and Kids under 6 are Free of charge! Pit admission is $35, and no license is required.

Advance tickets are available until Wednesday, August 16 by calling 443-513-4456. Please provide your name, phone number and the number of tickets you will need. Tickets may be paid for and picked up on race night at the Will-Call window after 4 PM. Advance ticket holders may enter the grandstands at 4:30 PM, 30 minutes before the opening of the box office.

Fans following the All Star Circuit of Champions may camp at the Speedway. Campers are asked to park in the turn 4 parking area, there are no hook-ups available, and no box camping allowed. Track officials ask that all fires be contained. There is no fee for camping.


About Thunder on the Hill Racing Series

The brainchild of Grandview Speedway owner Bruce Rogers, special events promoter Bob Miller and local driving star Dave Kelly, the Thunder on the Hill Racing Series celebrates 28 years of the most anticipated events of the racing calendar year after year. In 125 events over $4.2 million dollars has been divvied up among the area’s fastest racers. What started as a single 410 Sprint Car event in 1990 has blossomed to feature a variety of racing action including 358 Modifieds, USAC Wingless Sprints, All-Star Circuit of Champions, 360 & 410 Sprint Cars, Sportsman, Late Models, Midgets, Legends cars, DIRTcar and ROC Modified events. For more information visit: www.thunderonthehillracingseries.com<http://www.thunderonthehillracingseries.com>

Grandview Speedway is a high-banked one-third mile clay oval, celebrating their 55th Anniversary season in 2017. The facility offers free parking, quality food at reasonable prices (be sure to try the french fries), a program book, Grandview Speedway and Thunder on the Hill race wear and great viewing from every seat in the house. Race fans may take part in the Inside/Out promotion, where you can sign up (no charge) to watch warm-ups from inside turn four. Race fans are also invited to victory lane following the racing program and, race fans may enter the pits after the races to meet the drivers. Be ready to enjoy the spine-tingling fireworks salute on the feature event parade lap. For more information visit: www.grandviewspeedway.com<http://www.grandviewspeedway.com>

About the Arctic Cat All Star Circuit of Champions

All Star Enterprises, LLC, wholly owned by Tony Stewart, d/b/a the All Star Circuit of Champions, is a winged sprint car series. The All-Star Circuit of Champions Sprint Car Series is one of the oldest traveling 410 sprint car organizations and is a staple of grassroots, open-wheel racing. Formed in 1970 by Bud Miller, the series has largely been considered the first ‘outlaw’ Sprint Car organization of the modern era. After a 10 year stint as owner of the All Stars, Miller passed control of the series to Bert Emick in 1980; a reign that would continue through 2002. Guy Webb then purchased the series from Emick in the summer of 2002 and served as the series President for the next 12 years. Motorsports entrepreneur Tony Stewart agreed to terms with Guy Webb to become the sole owner of the original winged sprint car tour in January of 2015. For more information visit: www.allstarsprints.com<http://www.allstarsprints.com>

About Levan Machine and Truck Equipment