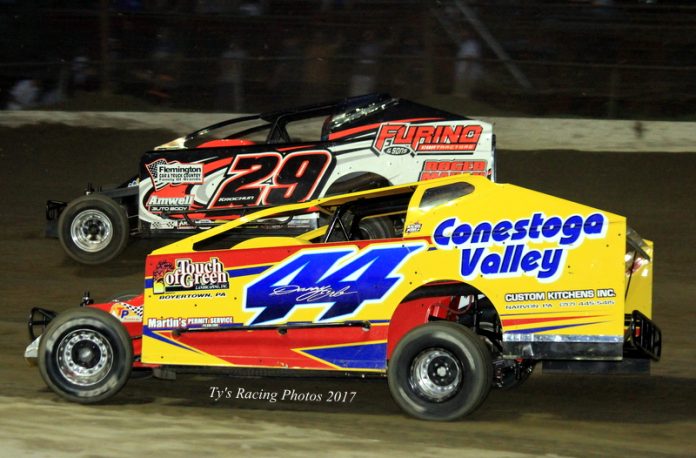 WNPV will be giving away three pairs of tickets (value of $94 per pair) to Knoebel’s Amusement Park which will include Good for One All Day Handstamp with Wooden Coasters. The Lansdale radio station, located at 1440AM on the radio dial, has been a long-time supporter of NASCAR and stock car racing at Grandview Speedway.

Geiswite Creations will be holding their 4th Annual Back to School Giveaway with more than 100 school age children receiving a folder, notebook and pencils. Some youngsters will receive backpacks.

The weekly Low Down and Dirty Meet & Greet will feature Doug Manmiller, Mark Kemmerer and Shawn Horning. The Meet & Greet gets started in the main gate area at 5 p.m.

Thursday, August 17th three time NASCAR Cup champion Tony Stewart will be the headliner as the 410 Sprints battle in the Thunder Cup and the Sportsman stock cars make up the second part of the show. Racing starts at 7:30 p.m.


The Blast from the Past Vintage Racers, quickly becoming a popular attraction, will join the TP Trailers 358 Modifieds, BRC Late Models and Sportsman as part of Hatfield Quality Meats Night on Saturday, August 19. As is the norm Smiley, the Hatfield mascot, will be there to shoot hot dogs and t-shirts into the stands.

With the completion of the Hatfield Night there will be just THREE point events remaining in the season. The final point event, Championship Night, is set for Saturday, September 9th.

Fans are reminded that advance tickets will be on sale for the 47th Annual Freedom 76 Modified In Honor Of Bruce Rogers on September 16th. The $30,000 to win Modified race is expected to attract many of the top names in dirt track Modified racing. Advance tickets are selling for $35 while adult tickets purchased on race day will sell for $40. Youngsters 6 thru 11 will pay $10 and kids under 6 are admitted free. Advance ticket holders will be admitted to the grandstand area 30 minutes prior to gates officially opening.

Fans and racers wanting to throw their support behind this special event that will remember the late Bruce Rogers can purchase a lap sponsorship for just $20 or sponsor a qualifying event for $200. Contact Ernie Saxton at 215.752.7797 or Esaxton144@aol.com. Tina Rogers and Tommy Kramer can handle your order at the track.

For more information on what is happening at Grandview Speedway check in at www.grandviewspeedway, Facebook or telephone 610.754.7688. The Grandview website has full details on the Freedom 76 by clicking on to the Freedom 76 link.