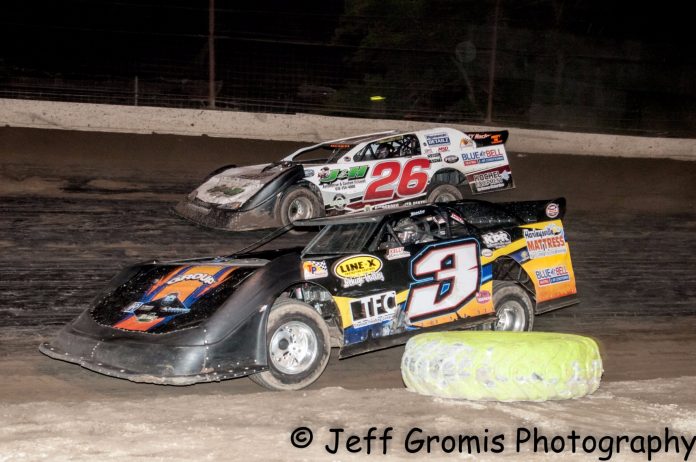 BECHTELSVILLE, PA – The BRC Late Models will be in the spotlight at Grandview Speedway on Saturday, August 26 as Bernheisel Race Components of Jonestown, PA offers thousands of dollars in product awards and discount certificates to the Late Models participating in BRC Night.

The Late Models racing in an extra distance 30 lap feature will be part of a four feature night of NASCAR stock car racing action getting the green flag at 7:30 p.m. Included with the Late Models will be the TP Trailers 358 Modifieds and Sportsman stock cars. Due to rain last Saturday the Sportsman will be running not only the regularly scheduled feature but will also race in a consolation and 25 lap feature that was rained out.

Added to the September 2nd show will be the rained out Saturday Modified feature creating a feature show that will include a second TP Trailers Modified feature along with features for the Sportsman and BRC Late Models.

BRC has been the title sponsor of the Late Models at Grandview and at Susquehanna Speedway. During the BRC Superior Product Nights at the two tracks $15,000 in product awards along with $40,000 in discount certificates will be available to racers carrying the Bernheisel Race Components decals.

Point leader Chuck Schutz will lead the Late Models at Grandview as they top off their night of action with a 30-lap feature while the Modifieds will also run in a 30-lapper with Sportsman topping their action with two 25-lap features.


“We care about Late Model racing, and we feel weekly dirt track racing is the backbone of our sport,” shared Jim Bernheisel, President of Bernheisel Race Components. “We need to help local racers and their tracks. BRC services customers from coast-to-coast in North America, but we are a local company supporting local racers as well. With weekly car counts in nearly all divisions under stress across the country, we are trying to help tracks make things a bit more affordable for their competitors. “

Bernheisel Race Components features a million dollar inventory in its extensive warehouse of wholesale and retail parts which also includes tubing, aluminum, lexan, plastic, body kits and complete bodies. They have a large walk-in showroom but also do mail order and online order processing. They supply parts for all cars, not just BRC Lazers.

Adult admission for the BRC Superior Product Night is $15 for adults while youngsters 11 and under are admitted free.

The weekly Low Down and Dirty Meet & Greet featuring racers and their cars on display takes place at 5 p.m. with spectator gates open at 5:30 p.m. and racing at 7:30 p.m.

Advance tickets will be on sale all nights for the 47th Annual Freedom 76 Classic In Memory of Bruce Rogers set for September 16th. The winner of this race goes home with at least $30,000 and will attract some of the top names in dirt track Modified racing. Advance adult tickets are $35 while on race day the tickets will sell for $40. Youngsters 6 through 11 pay $10 and under 6 will be admitted free. Rain date is Saturday, September 23.

And on Friday, September 15th the Mid-Atlantic Sprint Series and Sportsman stock cars will be in action. Admission is just $12 for adults, $5 for youngsters 6 through 11 and under 6 are admitted free. There is no rain date for this event.

Both nights of racing will start at 7 p.m.

Information on lap and event sponsorships is available through Ernie Saxton at 215.752.7797 or Esaxton144@aol.com. At the track information can be had through Tina Rogers or Tommy Kramer.

Check in at www.grandviewspeedway.com, Facebook or telephone 610.754.7688 for current information. Go to Freedom 76 link to get full info on the event.