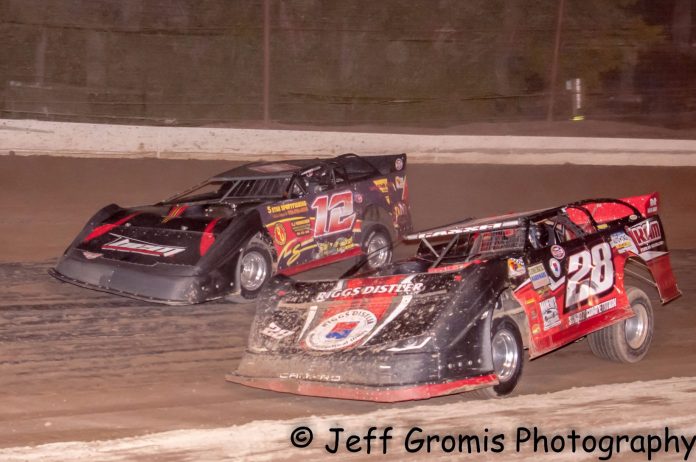 BECHTELSVILLE, PA – The battle for the BRC NASCAR Late Model title at Grandview Speedway continues on Saturday when the Late Models are in the spotlight with the running of the BRC Superior Products Night featuring a 30-lap main event.

Point leader Chuck Schutz is seeking his ninth Late Model championship. At present the veteran racer has 3335 points while second place Bryon Sipe, looking for his first championship, sits with 3128 counters, just 207 points behind. Steve Todorow holds on to third with 2967 points followed by last Saturday’s feature winner Wayne Pfeil with 2927 counters. Rounding out the top five is Kyle Merkel with 2641.

A strong field of Late Model racers is expected as thousands of dollars in product awards and manufacturer certificates is being offered to the racers provided they have the BRC decal clearly visible on both sides of the car.

Because of the partial rainout of events last Saturday the NASCAR Sportsman will run their regular 25-lap feature along with the rained out feature. And the TP Trailers 358 Modifieds will make up the third division of competition for an action packed night of racing.

Spectator gates open at 5:30 p.m. with racing getting the green flag at 7:30 p.m. The weekly Low Down and Dirty Meet & Greet featuring racers and their race cars takes place near the main entrance starting at 5 p.m.

Coming up on September 2nd is four division show of racing that will include the TP Trailers Modifieds, BRC Late Models, Sportsman and Blast from the Past Vintage racers. In addition the Modifieds will run in two 30-lap features including the rained out feature from August 19th. Again adults pay just $15 while youngsters 11 and under are admitted free.

Advance tickets for the 47th Annual Freedom 76 Run in Memory of Bruce Rogers will be on sale each Saturday leading up to September 16th. Advance tickets are $35 for adults. On race day the tickets will sell for $40.

For information on racing at Grandview check in at www.grandviewspeedway.com, Facebook or telephone 610.754.7688.