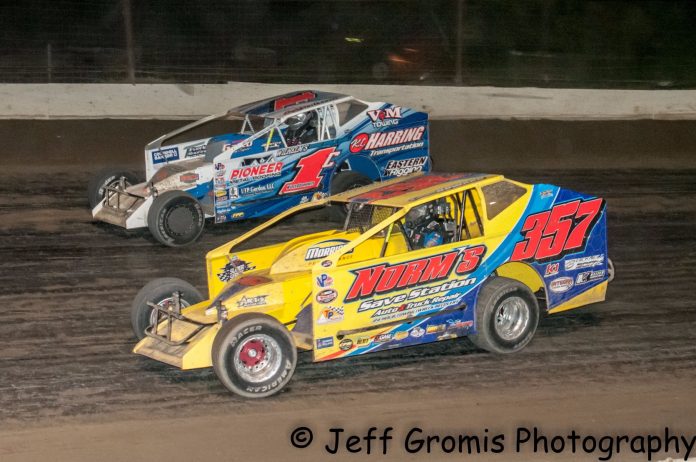 BECHTELSVILLE, PA – One of the most competitive seasons in track history will go into the record books this Saturday when WNPV-AM Radio presents Champion’s Night at Grandview Speedway.

The TP Trailers NASCAR 358 Modifieds will be seen in two 30-lap features while the Sportsman will top off their part of the night of action with a 25 lap feature and the BRC Late Models will finish their season with a 20 lap feature race. A full series of qualifying action will be presented in each division.

Currently point leader Craig VonDohren will be trying to take home his 10th championship while Jeff Strunk is going for his 11th title. Duane Howard, on a hot streak right now with a couple of big wins at other area tracks, will be looking to take a sixth track title. Both Mike Gular and Doug Manmiller are in the title hunt as they look for their first title. Only VonDohren, Strunk and Howard have been able to win Modified titles at Grandview since Terry Meitzler took the title in 1999.

With two features being run for the Modifieds, one a rained out event from August 12th, the contenders need only to make a mistake in one to have the title grabbed by another contender.

There have been 12 different feature winners in the Modified division this season with Duane Howard the only driver in the top five without a Saturday night feature win.


In the Sportsman Brian Hirthler is looking to become a first time champion as he has been on top of the standings for most of the season while Craig Whitmoyer and Brad Grim are close behind. In the BRC Late Models Chuck Schutz, the current point leader, will be looking to wrap up his ninth title.

The last Low Down and Dirty Meet & Greet will include Modified racers Jeff Strunk, Joe Fanelli and Mike Laise while Sportsman racer Joe Funk will also be part of the fun taking place in the main gate area at 5 p.m. Also part of the Meet & Greet will be the First Responders bringing awareness to safety and will have a rescue vehicle on display.

Advance tickets for the 47th Annual Freedom 76 Classic in honor of Bruce Rogers will be available on Saturday night. The advance tickets are priced at $35 each. On race day they will be priced at $40. The September 16th Classic will pay $30,000 to the winner and is expected to attract many of the top names in dirt track Modified stock car racing. Action will get underway at 7 p.m.

The night before the Mid-Atlantic Sprint Series will be in action along with the Sportsman racing in the Freedom 38’er offering $1500 to the winner. Modifieds entered in the Freedom 76 will be allowed to participate in practice sessions. Adult admission is $12, youngsters 6 thru 11 pay just $5 and under 6 are admitted free.

The Freedom 76 has a September 23rd rain date while the Friday night events have no rain date.

For additional information check in at www.grandviewspeedway.com and link with Freedom 76. The track phone number is 610.754.7688.