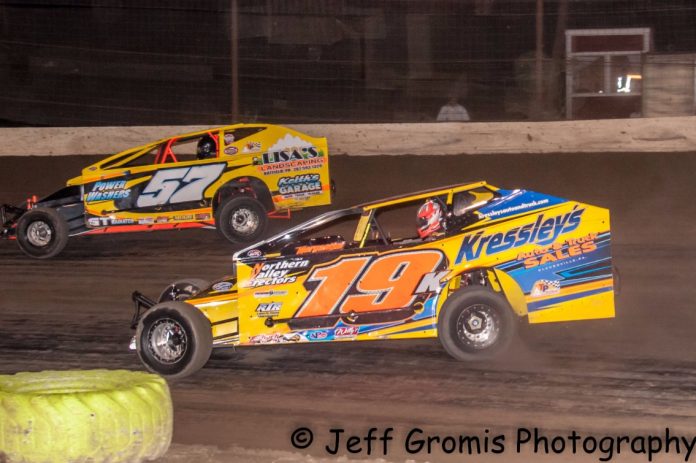 BECHTELSVILLE, PA – Racing action on Saturday night at Grandview Speedway sponsored by WNPV 1440 AM Radio, Lansdale, certainly had its share of varieties in all divisions.

Both Skip and Walt Smith paced the feature fields for all divisions in the Blast From The Past Red No. 2 driven by Dave Smith who lost his life in a freak highway incident while working for the township. Dave was the father of sportsman driver Derrick Smith.

In the rained out T.P. Trailers 358 NASCAR Modified 30-lap feature from August 19 it was Clay Butler, who became a track regular mid-season crossing the line first to register his first career win at the oval to become the 13th different winner. However due to an official error with the caution light, Brett Kressley, who had taken the lead on the 29th lap also shared the win.

Mike Gular had slowed down and as quick as the yellow went on it was turned off. By that time Kressley had backed off the throttle and Butler along with Jared Umbenhauer shot past him, but the yellow was never officially thrown. Management felt it was only fair to credit both Butler and Kressley with the wins.

Mike Mahaney, who travels from New York to pilot the Rod Breitenstein-owned No. 14 on occasion, had a rather dismal start to the season when he competed, but once the team discovered it was an electrical problem, they were in the hunt. Mahaney went from fourth to first by the second lap and despite yellow flags that fell when he needed them to regroup the pack when he encountered heavy lap traffic, he still pulled into victory lane to be the 14th different winner and chalk up his first career triumph at the track.


In the BRC 20-lap NASCAR Late Model feature Lou Egrie Sr. inherited the lead when Wayne Pfeil dropped out with mechanical problems and went on to capture his first win of the year to become the seventh different winner. The last time the two-time point champion had won was April 2015.

Mark Kemmerer added his name to the win list in the 25-lap NASCAR Sportsman feature for his first win of the year to become the division’s 12th different winner. He dedicated the win to fellow driver Derrick Smith’s father Dave.

All feature winners received monetary awards from T.P. Trailers and VP Racing Fuels providing they met the requirements along with the Dan’s Deli ½-way hoagie awards.

The night’s biggest winners were the newly crowned 2017 point champions.

Modified chauffeur Craig Von Dohren only won two features in the chase, but he still managed to record his 10th championship.

In the make-up Modified feature, Mark Kratz led for seven laps before Jeff Strunk hit the first turn yuke tire sending it onto the track bringing out the yellow. On the restart Butler charged to the head of the pack leaving Kratz, Kressley, Steve Swinehart and Umbenhauer battling for positions.

Lap after lap the battle for first ensued between Butler and Kressley with neither one giving up.

The caution was displayed after Kratz and Umbenhauer got hooked on the 17th lap. Umbenhauer broke free and continued, but Kratz stopped in turn two. The red was thrown the next try when a multi-car accident blocked the third turn. Butler and Kressley continued the duel, but now Frank Cozze and Umbenhauer were in the mix.

Kressley just took the lead on lap 29, but quickly slowed when the yellow light came on briefly, but quickly went out as Gular limped around the track. As a result Butler and Umbenhauer got by and Butler continued into the winner’s circle. After a turn of events, track management declared Butler and Kressley the winners following the error. Umbenhauer was third followed by Cozze and S. Swinehart.

The second Modified feature saw Mahaney take the lead from Mark Biehn on the second lap in search of a victory trailed by Biehn, Kratz and Kenny Gilmore.

Brett Gilmore brought out the yellow as he stopped in turn two on lap five. On the restart, Kenny Gilmore, who had overtaken second, made contact with Mahaney. Gilmore did a 360 without losing a position, but others in the back weren’t as fortunate and a multi-car tangle occurred. The top five behind Mahaney when racing went green again consisted of K. Gilmore, Cozze, Duane Howard and Von Dohren.

In no time Mahaney checked out increasing the distance each time he circled the 1/3-mile oval.

K. Gilmore’s fine run ended with four laps to go when he stopped in the second turn. This restart saw Ryan Watt in a challenging position.

On the 29th lap restart needed when Cozze broke with suspension problems, Strunk was once again in the first turn yuke tire. Also involved were Addison Meitzler and Danny Erb. Gular was sent to the pits for the incident. Mahaney left Watt chase him on the restart and succeeded in keeping all the competition behind.

Heats were won by Mahaney, B. Gilmore, Strunk and Meitzler. Ron Seltmann Jr. and Butler won the consolation races.

Saturday, September 16 these same drivers plus a host of others will compete in the 47th running of the Freedom 76 in memory of promoter Bruce Rogers with $30,000 going to the winner in addition to other awards.

In the Late Model feature Wayne Pfeil’s misfortune was Egrie’s fortune when Pfeil pulled out of the race on the sixth lap when a red flag was needed as flames shot out of the headers of Schutz’s car putting him out of contention.

Pressuring Egrie on the restart were Bryon Sipe, Drew Weisser, Kyle Merkel, who started dead last and was advancing quickly and Steve Todorow.

Even though numerous yellows were needed, Egrie Sr. didn’t give up until he saw the checkered unfurled.

Andrew Kreis was the leader of the Sportsman feature for eight laps before Ryan Higgs, while running second hit the second turn tire and spun also collecting Jim Housworth. When racing went green again Kemmerer was the new leader and within no time opened up a comfortable lead.

The action for second through fifth was a heated one, between Kyle Lilick, Louden Reimert, Brad Arnold and Lex Shive.

Kemmerer never looked back and went on to score his second career win trailed by K. Lilick, Reimert, Arnold and Mike Lisowski.

Heats were won by Kreis, Housworth and Jesse Landis while Brian Hirthler took the consi.

The 47th Annual Freedom 76 Modified Classic in Honor of Bruce Rogers is set for Saturday, September 16th. The will pay $30,000 to the winner and is expected to attract many of the top names in dirt track Modified stock car racing. Action will get underway at 7 p.m.

The Freedom 76 has a September 23rd rain date while the Friday night events have no rain date.