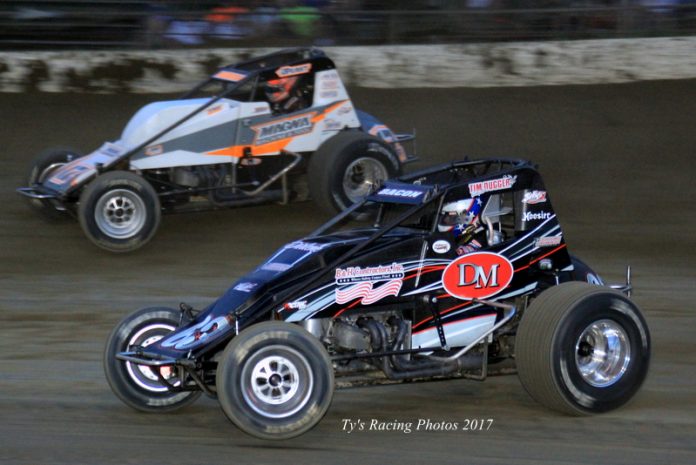 BECHTELSVILLE, PA – One of the hottest tickets of the NAPA Auto Parts Thunder on the Hill season, the wingless warriors of the USAC AMSOIL National Sprint Car Championship kick off their only East Coast tour at Grandview Speedway on Thursday night, June 14. The tradition continues as the Thunder Series opens this wildly popular annual tour.

In 2007, Thunder on the Hill special events promoter, Bob Miller and the Rogers Family, brought the nation’s longest touring Sprint Car group back to Pennsylvania after a nearly 30-year absence from the region.

“I vividly remember USAC being such an integral part of the Reading Fairgrounds history,” Miller recollects. “In some ways, my love of Reading made me so passionate about bringing USAC back to the east coast and specifically back to Berks County at Grandview.”

USAC came back in full force and remains one of the must-see events of the racing season.


Heading into the 12th Eastern Storm, the Bechtelsville, PA 1/3-mile dirt track opens the tour with the Jesse Hockett Classic, a 40 lap battle for the non-wing 410 sprint cars. Joining the program will be the popular 358 NASCAR Modifieds. Gates open at 5 PM wit race time set or 7:30 PM. Grandview and Thunder on the Hill are the only facility to have held a USAC event in every year of Eastern Storm history. Defending winner of this event on the hill is Brady Bacon.

York Haven, PA’s Susquehanna Speedway lands on the schedule for the sixth consecutive year, on Sunday, June 17. For the first time, United States Auto Club drivers head to Bridgeport Speedway on Monday, June 18 and the Storm concludes on Tuesday, June 19 at Weedsport Speedway.

Past Eastern Storm winners like Robert Ballou – who swept all three 2015 events, Brady Bacon – who holds wins at Grandview Speedway and Port Royal Speedway, Chad Boespflug, and Chase Stockon are expected for competition.

The Eastern Storm kicks off on Thursday, June 14 with the Jesse Hockett Classic – dedicated to the memory of the 2009 Grandview race winner. Joining the USAC non-wing Sprint Cars are Grandview’s popular 358 Modifieds.

Advance tickets for the Grandview Speedway USAC/358 Modified event are available by calling 443-513-4456. Callers are required to leave their name, phone number, and the number of tickets requested. Callers can then pick-up and pay for their tickets at the Grandview Speedway’s Will-Call Window after 4 PM. Advance ticket holders may enter the grandstands at 4:30 PM – a full 30 minutes before tickets go on sale to the public.

Kressley, Gilmore and Strunk Stay on Top of Grandview Points, Tripleheader on Saturday