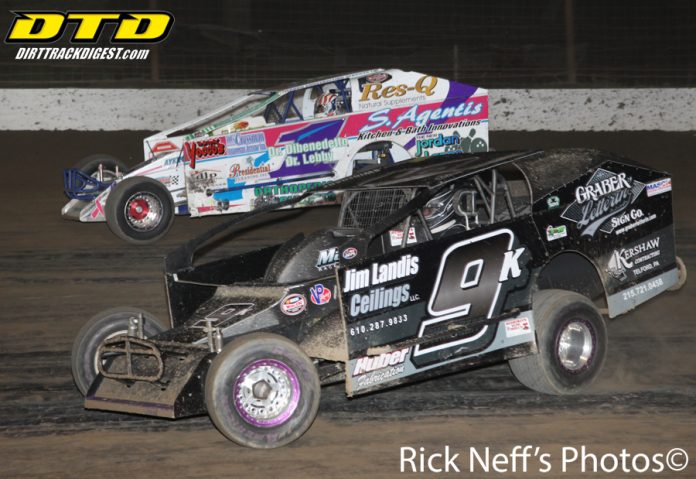 BECHTELSVILLE, PA – Lehigh Valley, PA’s RCN/TV will offer television coverage of six dates of Saturday night stock car racing at Grandview Speedway five of them NASCAR sanctioned. This will mark the 18th consecutive season that RCN has offered the Saturday action to their viewers.

RCN has offered auto racing coverage from area speedways for 39 years going back to the days of the now defunct Nazareth Speedway.

Coverage is not only available in the Lehigh Valley but also is show on several Berks county outlets including Boyertown, Bechtelsville, and Pottstown and surrounding areas.

“The RCN-TV coverage gives us the opportunity to create new fans,” said track spokesperson Tina Rogers. “In addition it is great exposure for race team sponsors and our own track sponsors. It is a win-win situation for all involved.”

During the programs hosted by well-known area racing personalities Randy Kane and Mike Feltenberger viewers are given news and notes, point standings, race results, driver and race team information, interviews with racers, news on coming events at Grandview and so much more information that will be of interest. Well known auto racing videographer Gary Silverman also provides highlight of races that were not part of the events being broadcast.


Those who have Video on Demand and RCN-TV as the cable provider are able to get race rebroadcasts.

The coverage, shown on a delayed basis, is broken up into two programs each week. Qualifying heat racing action will be included in one show and the feature races for the T.P.Trailers NASCAR Whelen 358 Modifieds, Sportsman and Late Models along with any special events will be shown in a second show. Each show will offer approximately two hours of coverage and will be shown on two separate nights during the week following the actual live Saturday race events. And there will be a second showing of the two night coverage on later dates.

Included in the schedule of events to have coverage are April 8, May 13, June 17, July 22, August 5, which will be the Forrest Rogers Memorial 50-lap Classic, and August 12.

“The television coverage by RCN/TV is a great tool for our racers to use in attracting sponsorship. We are told the programming from Grandview gets very high viewer ratings,” said track spokesperson Tina Rogers. “This also gives viewers that are not fans of the sport a chance to see what dirt track stock car racing is all about and perhaps serve as an incentive for them to come out and see the events live. It is pretty much a win-win situation for all involved.”

A few of the televised events are still available to businesses looking to benefit from sponsorship in motorsports at Grandview. Details can be had by contacting Ernie Saxton at 215.752.7797 or on his cellphone at 267.934.7286.

RCN coverage will kick off with the Bruce Rogers Memorial set for Saturday, April 7th. The 50-lapper will feature Small Block Modifieds and Big Block Modifieds racing for $7500 to win. All starters will earn at least $1000. The Sportsman will also be part of the opening night event. There will be no NASCAR sanction involved.

Other dates on the RCN schedule include May 12, June 9, July 7, July 21 and the Forrest Rogers Memorial on August 11th sponsored by Pioneer Pole Buildings.

Grandview Speedway will kick off their 55th consecutive season of stock car racing on Saturday, March 31st, 12 noon, with a free-to-the-public practice session featuring all types of competition.