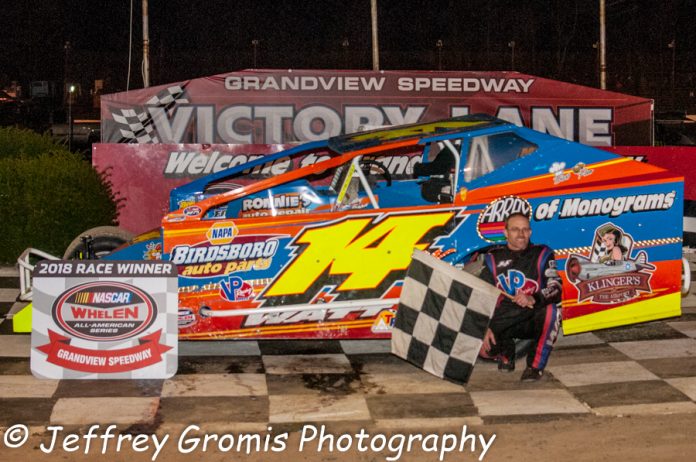 The 25-lap Late Model triumph by Snyder was his first victory at the raceway since July 20, 2013 and the tenth win of his career.

Watt dominated in the 30-lap NASCAR T.P.Trailers 358 Modified main event, winning his third career feature race at the track and his first since September 3, 2005.

Grim netted his third career victory in the 25-lap Sportsman division feature and scored his first since July 29, 2017.

Through the luck of the draw, the Green Lane, PA native, Snyder, started from the pole position in the 13-car starting field and quickly moved out to a full straightaway advantage as the race leader by lap 4. A caution a lap later bunched up the field, however, Snyder once again was lightning quickly with the new green, grabbing the top spot on the restart and stretching it to a full straightaway advantage again after nine circuits.


Caution again on lap 17 closed up the field, with Snyder playing the role of the rabbit again on the restart, with the competition chasing. Yellow flags waving again after lap 20 and lap 22 slowed things, but Snyder again just held onto that top spot each time and easily went on to victory by a safe margin over the fourth-place race starter from Shoemakersville, PA veteran Brian Shuey, Green Lane, PA chauffeur Kyle Merkel, who started from fifth, Reading, PA racer Drew Weisser, the seventh-place starter, and Pottstown, PA chauffeur Jordan Knepp, who took the initial feature green from tenth, at the checkered, earning an additional $100 bonus from TP Trailers and Truck Equipment out of Limerick, PA as the race winner.

“The car was good and so was the track tonight. The car was bottoming out there towards the end in turn 3. There was a pretty good sized cushion there, but we made it through alright and made the owner happy tonight. It’s sure a good way to start the new season,” offered Snyder.

In the Sportsman feature, a heads-up starting order saw Jim Housworth of Riegelsville, PA immediately jumped out in front after starting from the pole in the 24-car starting field and was the race leader after lap one. On lap two, third-place starter Brad Grim out of Coplay, PA made a move on the outside off turn four to become the new race leader at the line by a radiator, racing side-by-side with Housworth. Cautions after lap two and again after lap three bunched up the field, however, Grim remained out in front completing lap four, with outside front row starter Brian Hirthler in tow, as Housworth fell to third.

Grim maintained his advantage as the race leader, as Housworth moved back into the runner-up position by lap six, with Hirthler and Brad Brightbill now trailing. Brightbill climbed into third-place on lap eight and a caution flag after 11-laps were completed tightened up the field again.

With the new green it was Grim out in front over Housworth, Brightbill, Hirthler and now Louden Reimert of Oley, PA, who started from eleventh. Grim immediately started pulling away and opening up a sizeable advantage as the laps clicked off. With five to go, Grim was out in front by a full straightaway.

Little changed in the closing laps as Grim raced under the checkered first outrunning Housworth, Brightbill, Hirthler and Reimert in that order. Grim took home an additional $100 bonus from TP Trailers as well for his victory.

“The car was a little tight there at the end. We had to run the top and that wasn’t where I wanted to be, but I knew it was where I had to be if I wanted to stay out in front because that’s where the bite was. This is a very good team and I thought that they were closer to me there at the end, but my crew tells me we won by a full straightaway and that surprised me,” announced Grim.

Sportsman heat race winners were Housworth, Hirthler and Grim. The consolation winner was Kyle Lilick. A total of 33 Sportsman racers signed in for competition on Saturday night.

In the 30-lap NASCAR T.P.Trailers 358 Modified headliner, the heads-up start showed Doug Manmiller from Shoemakersville, PA racing out in front with the initial green flag after starting from the pole, but all eyes were on Ryan Watt from Boyertown, PA, who started fourth in the 28-car starting field and quickly powered his way around the outside to move up to the runner-up position after one tour. Watt fought it out with Manmiller wheel-to-wheel and made the pass to become the new race leader down the back part of the speedway and racing into turn three on lap four.

With six complete it was Watt, Manmiller and second-place starter Steve Swinehart of Perkiomenville, PA running as the top three. A caution quickly bunched up the field at that point.

On lap seven, tenth-place starter Duane Howard from Oley, PA powered his way into third, followed by Mike Gular out of Harleysville, PA and Kevin Hirthler of Boyertown, PA, who started from seventh. Howard started to work his way under Manmiller by lap nine and, eventually, squeezed by on lap 12 to take second. With 13 circuits in the record books, Watt was now out in front by a full straightaway.

Watt started to get slowed by lapped traffic, as Howard began to reel the leader in. With 18 down, Howard was now right on Watt, working through the lapped traffic, as Manmiller brought out a caution due to a badly smoking motor after 21 rounds were completed.

On the restart Watt powered out in front again over Howard, fourteenth-place starter Frank Cozze of Wind Gap, PA and Gular. After 23 circuits, Watt again pulled out to a safe advantage. On lap 25, Craig Von Dohren from Oley, PA climbed into the top five, after starting in twenty-first.

Watt earned an additional $250 bonus check from TP Trailers after his feature win, plus the weekly $2,500 first-place winner’s prize.

“I wish we had this car here last week (referring to the VP Racing Fuels Bruce Rogers Memorial that paid $7,500 to win). We’ve been so close here with a couple of second-place finishes. We’ve got a lot of friends and family here tonight. It’s great to finally be back in victory lane. I almost forgot how to get here. We brought this Bicknell car here last year but had a fuel line issue hurt us. Tonight there was a lot of grip and I could easily get that bite if I got back into the throttle again. I wasn’t really worried once we got out in front,” commented Watt.

The 358 Modified heat race winners were Manmiller, Steve Swinehart, Kenny Gilmore and Watt. Consolation winners were Von Dohren and Jared Umbenhauer of Richland, PA. A total of 39 358 Modified cars signed in for competition on Saturday evening.

A special 15-lap Blast from The Past Vintage Car feature event saw Brett Peters go high on lap seven to take the lead and go on to the victory over Andy Cassell, Todd Lapp, Jamie Undercoffler and Ricky Rutt, who was also declared as a race winner in his division, with all the Vintage cars running together in a single feature event.

Sunday, May 6, 1 p.m. Outlaw Enduros and Blast from the Past Vintage Cars.