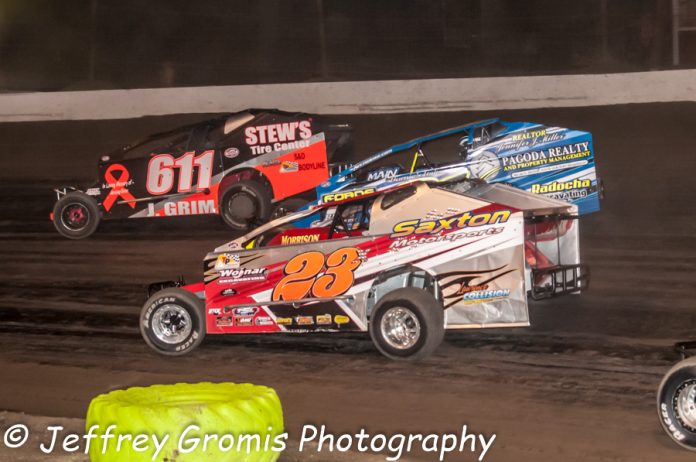 BECHTELSVILLE, PA = There is the old saying “April showers bring May flowers” and the management of Grandview Speedway hopes that April showers will be bringing great weather for NASCAR stock car racing and other planned events during the month of May.

Just two of five scheduled events were able to be presented in April. Last Saturday’s tripleheader fell victim to the weather.

Next up on the schedule is a three division show on Saturday, May 5 featuring the NASCAR T.P.Trailers 358 Modifieds, Sportsman and Late Model stock cars with a new starting time of 7:30 p.m. Spectator gates will open at 5:30 p.m. throughout the season up until the Freedom 76 Classic is presented on September 15th.

The three division card of racing will include a full series of qualifying events topped by a 30-lap feature for the Modifieds and 25-lap features for the Late Models and Sportsman. Fans are invited to visit racers that are part of the weekly Low Down and Dirty Internet Radio display at the main gate. Adult admission is $15 while youngsters under 12 are admitted free.

On Sunday, May 6th, the first Enduro and Blast from the Past Vintage car doubleheader of the season will be presented with a 1 p.m. starting time. The big and small car Enduro divisions will each run in 100-lappers while the JunkYard class will be featured in a 50-lapper. And there will be a main event for the Ladies. General admission for adults is just $10 while youngsters under 12 are admitted FREE.


The Modifieds, Sportsman and Late Models will be featured each Saturday night during the month of May with May 19th, Whelen Engineering Night, having the Blast from the Past Vintage cars added to the show giving fans a four division show with no increase in admission.

And on Sunday, May 27th, the first Thunder on the Hill Series event will be presented with the 21st Annual Traffic Jam Big Block/358 Modifieds being the main attraction. The Mid Atlantic Sprint Series will be part of the action packed night of racing along with the Sportsman stock cars. Racing will start at 7:30 p.m.