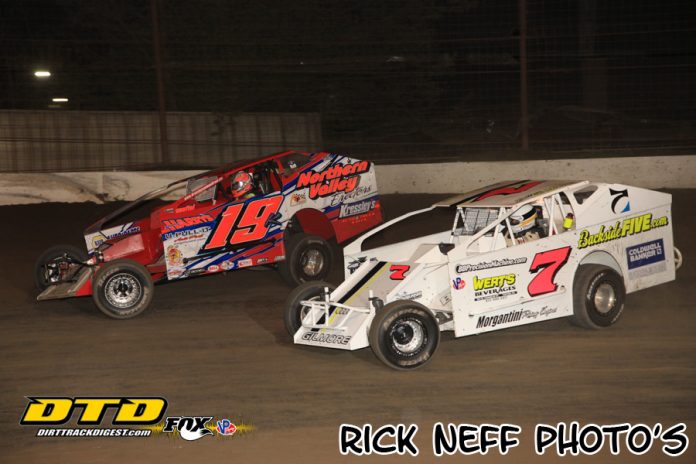 BECHTELSVILLE, PA – Racing action on Saturday night at Grandview Speedway was interrupted by a few rain delays, but track crew and management dealt with the situation and through the cooperation of all drivers and everyone involved, a complete show was presented and Ma Nature was defeated.

Brett “The Threat” Kressley, who captured his last win at the 1/3-mile oval on September 9, 2017, jumped into the lead on the 17th lap restart and withstood runner-up Jeff Strunk’s challenges to post his first win of the season in the 30-lap T.P. Trailers NASCAR 358 Modified feature.

In the 25-lap Sportsman feature Brad Arnold inherited the lead when leader Dylan Swinehart was put back two positions prior to the fifth lap restart for aggressive driving. Arnold, who suffered a blown engine in warmups back on April 21 and couldn’t compete in the events, went on to hold off the bids of fast approaching Craig Whitmoyer for his first win of the year. Arnold last stood in the winner’s circle on June 25, 2016.

Steve Todorow scored his second career victory by taking hoe the checkered in the 25-lap Late Model feature. His last win was September 3, 2016.

All three feature winners received monetary awards courtesy of T.P. Trailers and VP Racing Fuels presented merchandise bonuses if any of the winners used their products. In order to receive the items the winners had to meet the necessary requirements. The Dan’s Deli half-way hoagie awards went to Brett Gilmore, Modified; Brad Arnold, Sportsman and Steve Todorow, Late Model.


All three feature winners along with another star studded field of Modifieds, Sportsman and Late Models will return to action on Saturday night at 7:30 p.m.

Ray Swinehart brought out the first caution on the seventh lap when he broke in the fourth turn. Doug Manmiller, who had nowhere to go, spun to avoid contact. It was still B. Gilmore showing the way when action resumed being chased by Waisempacher, Kressley, Fanelli and Strunk.

Kressley advanced to second to put his bids in for the top spot on the 11th lap restart needed when Duane Howard stopped in the fourth turn with a flat tire.

The red was thrown on lap 17 after Waisempacher, who was falling back positions as the race progressed, rode the first turn outside wall on his roof. He was uninjured. On the next attempt Kressley got a run on B. Gilmore coming off the third turn to take over first. Gilmore, trying to regain first, spun in the second turn in front of the others to regroup the field and void the restart. Once

again the restart had to be called back when a multi-car accident blocked turns one and two. Finally action resumed with Kressley at the head of the pack, but by this time Strunk, Kellner, Ryan Grim and Craig VonDohren completed the top five.

It seemed like every time Strunk had momentum going and was reeling Kressley in the yellow came out. This time it was when Kyle Weiss spun along the front chute on lap 19. Kressley wasted no time keeping Strunk at bay on the restart.

Everyone got another opportunity to overtake Kressley with five laps to go after another flat tire caused Howard to stop in turn four. Kressley was determined to keep the competition behind him and that’s what he did until the checkered fell on his third career win. Chasing him across the line were Strunk, Grim, VonDohren and Mike Gular, who started deep in the pack in the 24th spot after qualifying through the consi.

Ray Swinehart, VonDohren, B. Gilmore and Kressley were the heat winners. Consi winners were Tim Buckwalter and Jared Umbenhauer, who later scratched out of the feature before it started.

Nathan Mohr set the pace for two laps in the Sportsman feature before Louden Reimert stopped in turn three for the third lap caution. On the restart Swinehart made his way to the front from third and Mohr fell to third since Arnold followed through for second at the same time.

This turn of events relined the pack with Arnold the new leader followed by Mohr, Swinehart and Jack Butler.

Behind Arnold the battle for second brewed between Butler and Craig Whitmoyer. This allowed Arnold to build up a comfortable lead.

After a heated dual, Whitmoyer finally cleared Butler and took chase after Arnold.

No one could reel Arnold in to pressure him and he scored his third career win. Finishing second was Whitmoyer followed by Butler, Brad Brightbill and Brad Grim.

In the 25-lap Late Model feature Drew Weisser took the early lead and set the pace for seven laps until he went too high coming off the fourth turn an before he regained control, Todorow and Wayne Pfeil got past him for first and second respectively.

Behind Todorow and Pfeil, Weisser, Danny Snyder and Lou Egrie diced for positions.

Pfeil challenged Todorow on occasion, but Todorow always pulled away.

Once Todorow took control he never looked back and he was able to chalk up his second career win trailed by Pfeil, Snyder, Egrie and Chuck Schutz.

Grandview Speedway is located on Passmore Road, just off Route 100, in Bechtelsville, PA, 10 miles north of Pottstown. For information check in at www.grandviewspeedway.com, Facebook or telephone 610.754.7688.