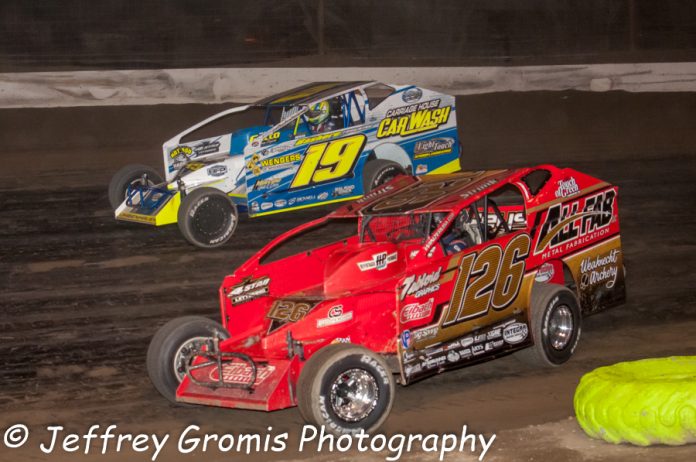 BECHTELSVILLE, PA – Whelen Engineering Night at Grandview Speedway this Saturday night will feature four divisions of stock car racing with the first event getting the green flag at 7:30 p.m.

Heading up the three divisions of NASCAR stock car racing will be the T.P.Trailers 358 Modifieds joined by the Sportsman stocks and Late Models. The fourth division of racing will feature the Blast from the Past Vintage racers giving fans in the stands the opportunity to see what the racers of the past looked like. The Vintage cars are gaining in popularity with each appearance at the one-third-mile, banked clay oval.

Even though there is an added division of racing the admission price for the Whelen Night will remain the same as adults pay just $15 for admission while the youngsters under 12 are admitted FREE. And there is always free parking on the speedway grounds.

Spectator gates open at 5:30 p.m. and that is when the Low Down and Dirty Internet radio show will be presenting their weekly Meet and Greet with drivers and cars on display. This will Sportsman racers Nathan Mohr and Ken Eckert Jr. will be there along with Modified talent Justin Grim.

Whelen Engineering, sponsor for the night, has been a longtime supporter of the NASCAR.


Current Modified point leader Brett Kressley will lead a talented field of racers that will also include defending champion Craig VonDohren, Duane Howard, Frank Cozze, Jeff Strunk, Mike Gular and a host of others. The most recent Saturday night show featuring the Modifieds attracted 40 of the popular racers trying for the 28 starting spots in the 30-lap feature. Sportsman will be led by point leader Brad Grim while Late Models will have point leader Danny Snyder leading the charge.

Coming up on Saturday, May 26th will be a tripleheader show of NASCAR stock car racing featuring the T.P.Trailers 358 Modifieds, Sportsman and Late Models.

And as the second part of the Memorial Day weekend action at Grandview the first Thunder on the Hill Racing Series events will be presented on Sunday, May 27th with the 21st Annual Traffic Jam Big Block/Small Block Modifieds topping the show. Also included will be the Sportsman stock cars along with the Mid-Atlantic Sprint Series. Racing starts at 7:30 p.m.

Complete information on racing at Grandview can be found at www.grandviewspeedway.com, Facebook or by telephoning 610.754.7688.

Grandview Speedway, one of the most successful NASCAR short tracks in the nation, is located on Passmore Road, just off Route 100, in Bechtelsville, PA 10 miles north of Pottstown.