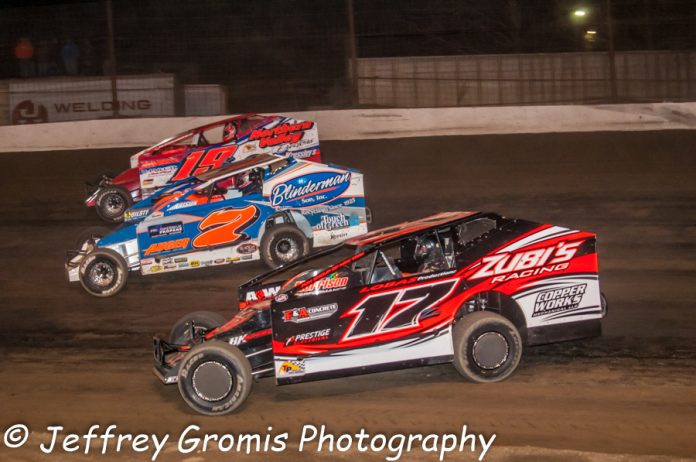 Brett Kressley, became the first repeat winner of the season in the 30-lap T.P. Trailers NASCAR Modified feature for his fifth Saturday night victory. It didn’t come easy for the current point leader as Mike Gular pressured him from the Dan’s Deli ½-way hoagie marker, through numerous cautions, until the checkered flag was unfurled.

Wayne Pfeil led from start to finish in the 25-lap NASCAR Late Model feature to record his first win of the season and 12th career win by a healthy margin over teammate and runner-up Kyle Merkel. Pfeil became the third different winner thus far this season in the division.

In the 25-lap NASCAR Sportsman feature Kyle Lilick led the first eight laps before Dylan Swinehart took the high line coming off the fourth turn to become the new leader. Lilick regained control on the 21st lap and stayed there until he posted his first win of the season and second career triumph as the fourth different winner of 2018.


Modified action saw Briggs Danner set the pace for one lap before Skylar Sheriff overtook him on the second lap restart for a five-car second turn incident.

Behind Sheriff, Ray Swinehart, rookie Jordan Henn, Brian Krummel and Bobby Trapper Jr., another rookie competed second through fifth with Kressley making his move to advance into the top five.

Danner stopped along the backstretch with a flat tire for yet another caution on lap six. Sheriff held onto first when action resumed, but by this time Kressley, Krummel, Henn and Gular battled for positions behind him.

Kressley, who powered his way to the front from 15th, was in the lead by the 11th lap – the same time Gular overtook second to challenge him.

The caution came out when Doug Manmiller stopped in the first turn on the 18th lap. On the restart Kressley hopped the third turn cushion which gave Gular an opportunity to pass him, but Kressley quickly regrouped to hold his position. Kressley commented in victory lane, “he knew Gular wasn’t going to get him on the inside and he picked up his pace when Gular showed him the nose of the car.”

With ten laps to go Frank Cozze, who started 13th, joined the front row action to make it a three-way battle. Krummel and Duane Howard, who had to go pit side with a flat right-rear tire on the second lap, but was able to rejoin the action in time, diced for the remaining positions.

Even though there seemed to be an overabundance of caution flags, Kressley kept everyone at bay and pulled into the winner’s circle for the second time in May. Finishing a close second was Gular followed by Cozze, Howard and Craig Von Dohren.

Pfeil wasted no time keeping the Dave “Crazy” Yost owned No. 72 ahead of Bryon Sites, Chuck Schutz, Dave Ogin and Lou Egrie at the drop of the green in the Late Model feature

Defending point champion Schutz, took over second on the second lap to take chase after Pfeil leaving Sites, Egrie and Danny Snyder behind.

The red was thrown when Sites’ car caught fire on the homestretch on the 12th lap. He quickly exited the burning car and was uninjured. Pfeil was still the leader on the restart with Schutz giving him no room to slip-up.

Schutz, who drifted up high in turn one the previous lap stopped in the third turn for the yellow on the 14th circuit as his bad luck streak. This next attempt put Pfeil and teammate Merkel one and two and Pfeil knew he was there.

The second red came out on lap 17th when Drew Weisser hit the first turn wall with heavy impact and then Jordan Knepp, unable to avoid him made contact. All drivers were injured, but their cars sustained heavy damage. Pfeil led the pack to the green on the restart and within a few laps had a comfortable lead built up.

No one could catch Pfeil as he was able to get back in victory lane for the first time since August 19, 2017. Finishing second was Kyle Merkel followed by Lou Egrie, Danny Snyder and Steve Wilson.

It didn’t take Kyle Lilick long to go from second to first in the beginning of the sportsman feature while Nathan Mohr, Kenny Bock, Swinehart and Ryan Beltz followed suit for the running order behind him.

Mohr spun in the second turn for the ninth lap caution. On the restart Swinehart went close to the fourth turn boilerplate to get a good run and was successful at becoming the new leader.

Lilick was closing the gap Swinehart had built up as the race went on and by the 18th lap he reeled him in.

The lead changed for the third and final time on the 21st lap and now Swinehart diced with Whitmoyer for second as the top three were bumper to bumper.

Lilick never faltered and went on to claim the win. Whitmoyer took over second with one to go followed by Swinehart, Grim and Bock, for his best finish.

Heats were won by Lilick, Andrew Kreis and Mohr.

Come Saturday, June 2, the NASCAR racers will be back in action with a tripleheader show that will feature the excitement of T.P.Trailers 358 Modifieds, Late Models and Sportsman stock cars. With at least 12 events of racing planned fans can figure on a great night of racing entertainment. Adult fans pay just $15 for a ticket that gives them a seat with a clear view of all the exciting action taking place on the one-third-mile, banked clay oval. Youngsters under 12 are admitted free. There is free parking on the grounds of the speedway. And active military are always welcomed free or charge with proper ID.

And on Sunday (June 3) the Outlaw Enduros and Blast from the Past Vintage Cars will try again to get their first show of the season in with a 1 p.m.starting time. Racing action for the Enduros will include Twin 50’s for the Big Cars and Twin 50’s for the Small Cars. The Junk Yard Cars will perform in a 50-lap Enduro and there will be a 10-lap main event for the Lady racers. The Blast from the Past Vintage Cars will make up the second part of the show. Adult admission is just $10 with kids under 12 admitted free.